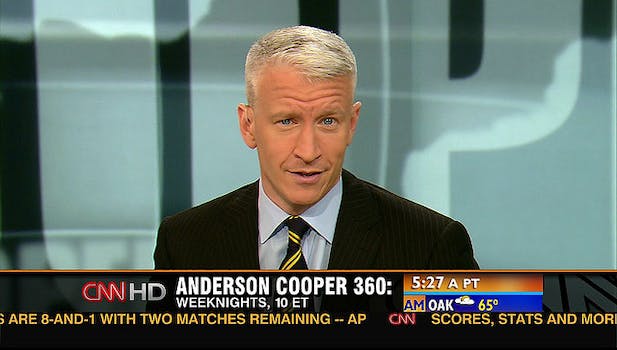 The TV host's would-be crusade against Reddit's r/jailbait just ends up drawing more attention to the racy collection of links.

About 130,000 more visitors came to the section on Friday, resulting in nearly four million page views and over 1,000 new subscribers over the weekend.

Cooper took on the section in the Thursday edition of his “Keeping Them Honest” segment on his primetime CNN show, Anderson Cooper 360. He criticized Reddit for hosting the section, claiming the site’s staffers were “totally uninterested in stopping them.”

The section has become notorious on Reddit for linking to sexually-charged but non-nude images of mostly underage girls.

As we noted on Friday, Cooper’s significant reporting arsenal seemed to have misfired: Commentator Jeffrey Toobin noted that the images appear to be completely legal.

So whether or not Reddit bans the section, the photographs themselves will always be just a Google search away.

That’s not to say Cooper was wrong in pointing out the section’s moral turpitude: As a journalist, he’s just doing his job.

But without any kind of practical road map for actually limiting the proliferation of these images beyond one website, the CNN anchor looks, at best, naive.

And, at worst—as is apparent from the traffic stats released by the section’s creator, violentacrez, earlier today—Cooper ends up looking more like a teen-pics promoter than a moral crusader.