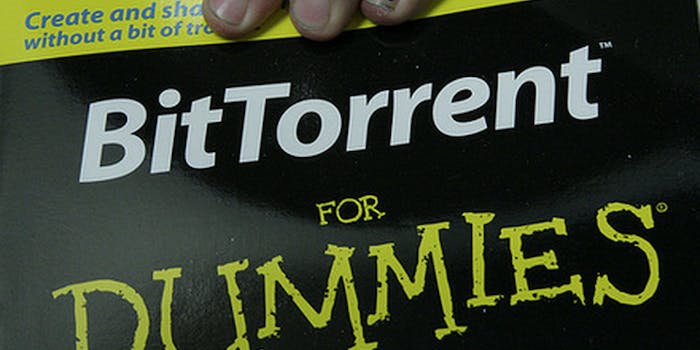 The Reddit section, r/Torrent, offers advice on everything you wanted to know but were afraid to Google.

Torrenting—the process of exchanging data through peer-to-peer applications—is something that is done covertly much more than it is openly discussed.

While you can technically torrent anything, the service is primarily used to exchange copyrighted material—illegally. As a result, most discussions and how-to tutorials are pretty furtive. After all, torrenting has been a controversial issue dating back to Napster, with no end in sight. And we are, as copyright holders ourselves, certainly not advocating illegal downloading.

But there was no question or controversy on Reddit’s r/Torrent when MrMcFluffems confessed to being ignorant about file-sharing. The fact is, even though many are still ignorant of the way of torrenting, it is a huge part of the Internet. BitTorrent alone represents almost 15 percent of all Internet traffic. r/Torrent quickly answered the call and delivered tips, tricks, and everything a computer-savvy user needs to know about downloading content from fellow Web surfers.

Virus protection, that is. The first line of defense is to download torrents only from sources you trust not to infect you. (r/Torrent provides a cheat sheet of trusted file trackers the community most prefers.) The second line of defense is anti-virus software.

“[O]nly download from trusted sources [and] make sure your virus protection is up to date at all times,” NewspaperBlanket wrote.

TheScriptKiddie explains why he doesn’t sweat over torrenting:

“I would just like to point out that ‘getting caught’ isn’t really a thing. You might get a cease and desist letter if you aren’t careful, but these bear no legal weight and really don’t mean anything. I’ve gotten at least 5 so far this year, and I just stop seeding the file mentioned and delete the email. Only a handful of people have ever been sued for file sharing (not counting the 20,000 name troll lawsuits that never make it to court), and of them only two (correct me if I’m wrong) cases have found the downloader liable for damages.”

3) You don’t need a million connections.

When you torrent files, you need an FTP client to do it. Chances are your client has a “max connections” setting. Don’t use it. While it may feel like you’re speeding up the torrent process with more connections, each new connection actually uses a little more of your bandwidth.

Some advisors suggested using private trackers—hubs for torrents with increased security. Unlike enormous torrent site ThePirateBay, which anyone can join right away, private trackers require anything from a sign-up process to an invitation from a moderator. r/Torrent provides a cheat sheet of private trackers and even its own tracker, r/BaconBits.

“In practice it is highly unlikely you will caught if you belong to private trackers and don’t use pirate bay,” tmstms wrote.

Other redditors observed that private trackers aren’t actually much safer than public ones. Choose the tracker that provides the torrents you want most, and follow the instructions outlined above.

“Think about it this way: if you can get into it that easily, why can’t someone who wants to catch you get into it as well? It’s somewhat like security through obscurity—they can catch a significantly larger amount of people downloading from ThePirateBay, etc. than a smaller, less accessible tracker, so in most situations it’s not worth it to go after trackers which are considered private.”

Torrenting wouldn’t be possible without the torrent community, the millions of people who “seed,” or offer up, digital files for you to download to your computer. Redditors suggested having a positive upload to download ratio, in which you give out more than you get. They also advised staying in touch with other torrent users through message boards.

“Seed til you die. Be active on community forums,” culp wrote.

Now, maybe if the studios were as interested in helping you watch their movies…