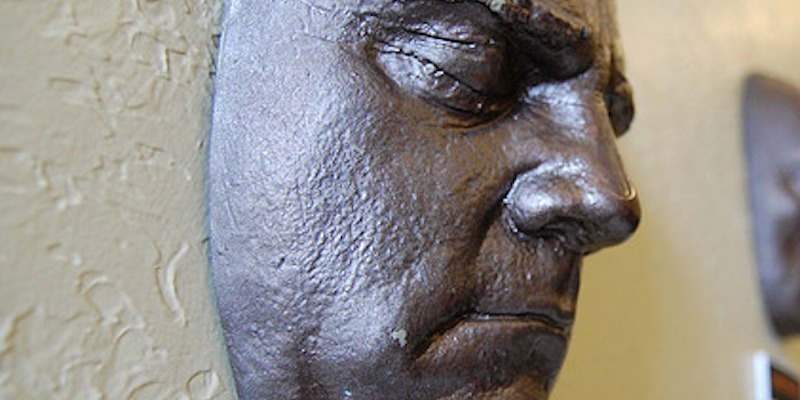 Thanks to his groundbreaking prosthetic, Eric Moger can eat and drink again.

Thanks to 3-D printing technology, Eric Moger is getting his life back.

Four years ago, doctors detected a massive tumor growing beneath the skin on his face. They successfully removed the cancerous growth, but were also forced to remove most of the entire left side of his face. After the lifesaving procedure, the British restaurant manager had a gaping hole where his eye, cheek bone, and part of his jaw had been. Moger would have gone on to live the rest of his life with half his face missing.

Nicholas Kalavrezos—the surgeon who removed his tumor—referred Moger to Dr. Andrew Dawood, a dental surgeon and implant specialist. Dawood had previously experimented with 3-D printing by recreating his patients’ jaws and practicing surgical procedures on them.

With Moger, Dawood used CT and facial scans to create a facial blueprint. Using that data, the doctor was able to construct a “scaffold,” a titanium jaw replacement that uses 2-inch-long rods to hold it in place.

Dawood also implanted a plastic plate inside of Moger’s mouth. This would allow him to eat and  drink for the first time since the surgery. Previously, Moger was fed via a tube that went directly into his stomach.

The surgeon used toughened nylon and magnets to build a removable facade.

“When I had it in my hand, it was like looking at myself in my hands,” Eric Moger told the Sydney Morning Herald, referring to his new mask. “When I first put it up to my face, I couldn’t believe how good it looked.”

This is what Moger looked like prior the surgery. This is him with the prosthetic.

“Before, I used to have to hold my hand up to my jaw to keep my face still so I could talk properly and I would have liquid running out the side of my face if I tried to drink. When I had the first glass of water wearing the prosthetic face, nothing came out—it was amazing.”

The 60-year-old British man, who got engaged prior to developing the tumor, is just glad to be getting his life back on track.

“Now I have a new face for the wedding,” he noted. “I can restart my life after having it on hold for four and a half years.”