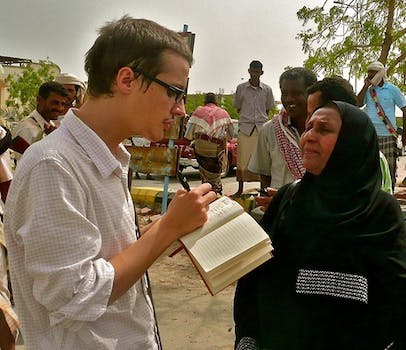 From Yemen to South Korea, these are the reporting breaking hard news with impressive skill and dogged determination.

News breaks fast, and in 2012, it happens first on Twitter..

Great professional journalists on Twitter act as curators of real-world, real-time events. Since there’s no editor polishing those nuggets before they go out, tweeting is a true test of a reporter’s writing ability. Although there is no Pulitzer Prize for “Best Tweet,” professionals have been live-tweeting everything from sports events and earthquakes to court proceedings and nuclear meltdowns, with all the dedication they bring to their print counterparts.

The Daily Dot rounded up the 10 of the best journalists on Twitter in an entirely arbitrary but quality-rich list.

From the London bureau of the New York Times, Somaiya has live-tweeted each of the Julian Assange extradition trials and their inevitable appeals, drawing the online equivalent of applause from other journalists. He may actually be faster than voice recognition software. His lightning typing and discerning intelligence mean that only the interesting bits get tweeted, but all of those do.

We are literally staring at a twitching curtain in the window of the embassy balcony. #waitingforjulian

The dauntless O’Brien has covered every minute of the Bradley Manning pretrial hearings to date and will cover all things Manning for the foreseeable future. Barred from tweeting within the courtroom, she’s tweeted everything outside it, including links to her comprehensive court transcripts, nervous-making encounters with hostile military personnel, discouraging press conditions, and Freedom of Information requests (and refusals).

Herman is the Voice of America chief for the Korean peninsula and Japan. He was also the voice of the Japanese earthquake and Fukushima disaster, often tweeting stories and leads a full 24 hours before other news organizations. In a multilingual zone, it’s all the more challenging to understand what’s being discussed. Add to that the challenge of distilling it into 140 characters at a time and you have a serious test for any journalist at the best of times, let alone during an earthquake, evacuation, tidal wave, and nuclear meltdown.

Montgomery of the Tampa Bay Times recently caught our attention for his eye-of-the-storm reporting on Hurricane Isaac.

Bissinger is Vanity Fair’s sports writer and resident blowhard (the latter presumably an unpaid position), and he is also impossible to resist. In alternate weeks he threatens to flounce off Twitter or take it over, and he’s not above tweeting, “I did blow LeBron. He shot prematurely,” just to keep the Internet from being boring. Unlike most journalists, Bissinger has no tiny editor interposing himself between his brain and his typing fingers, and his Twitter feed is the best splatterpunk spectacle in sports writing since Hunter S. Thompson.

Here we go..some twidiot can’t handle fuck so says STFU. We fucking deserve to be annexed by fucking China.

This freelancer reports from Yemen, an underreported but extremely contentious country on the Arabian Peninsula. For a split second last year, it seemed that Yemen would be the next great success story of Arab Spring, but somehow it never came to pass; quite the opposite. For clues as to why, and for hints about where it’s headed, follow Baron, a meticulous hyperlocal reporter in one of the most interesting locales around.

Day two of sitting on kidnapping negotiations. Those involved much more willing to note feelings of fatigue…it’s been 4 months. #yemen

Toosi is the European desk editor for the AP, but that doesn’t prevent her from retweeting the most interesting stories from seemingly every other news organization on the planet. Her curation reflects her interest in women’s rights, and in political and economic strife in countries from Iraq to Pakistan. Fraught as that territory is, she goes a step further, retweeting criticisms of the AP itself. When you’re not the owner, that takes a certain and rare kind of courage.

Salmon, the finance blogger at Reuters, was one of the first truly prominent journalists to use Twitter on a personal, rather than a boringly professional, level. Naturally, that only led to increasing influence for this highly opinionated and wide-ranging personality. He doesn’t shrink from mixing it up with those he disagrees with, and he has been known to correct himself, an unfortunately increasingly rare act in the media. His choice of articles and subjects to retweet is broad and unpredictable but almost always interesting.

Energy independence in 4 years! And a pony for everyone!

Patel is another talented live-tweeter, coming to you from Johannesburg, South Africa. Her style is tight, often coming in short of 140 characters, but dense with information. Mercifully, it’s also free of noxious abbreviations; it simply reads like Hemingway reporting on the political situation in South Africa. She’s not afraid to reach out, asking followers for help with definitions or leads.

This roundup wouldn’t be complete without a classic, hard-boiled New York City journalist. He’s a recovering Gawker writer and current senior editor at the New York Observer. Kamer’s tweets constitute a bitter, Gonzo memoir of the contemporary mediascape. Think Studs Terkel on Adderall, sitting in the back row at a stuffy awards dinner, throwing spitballs at Diane Sawyer.

No. While an inspired idea, you may not nominate Honey Boo Boo for the 2012 Media Power Bachelorette list.