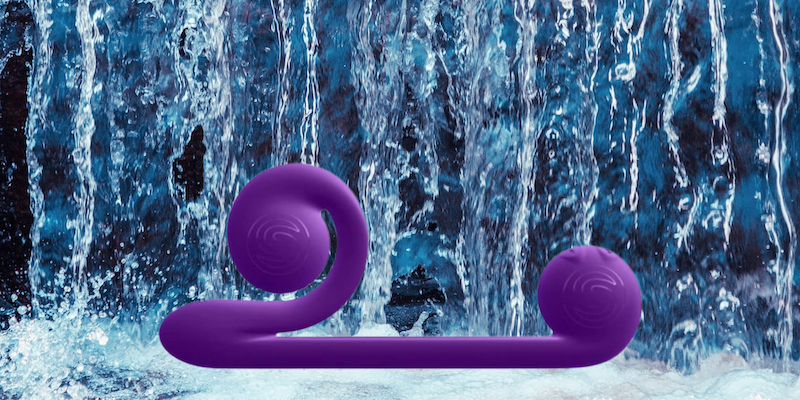 The Snail gives the Rabbit a run for its money.

I’ve never seen another toy out there like it before. I’ll admit, part of my curiosity was because I wasn’t even sure exactly HOW you would use it! The more I looked at it and watched videos from stores carrying it, the more I thought, that’s supposed to work similarly to a Rabbit, but how?

What is The Snail sex toy?

For me, this was a game changer. I’ve always loved the idea of rabbit-style toys, but in practice, they just didn’t do what they were advertised exactly. Internal stimulation plus clitoral stimulation, sounds excellent in theory, right? Of course, it does. However, when you’re thrusting away with a toy, clearly, you’re moving the entire toy, which causes those awesome little ears to move as well. While this is okay at the beginning of your solo session, once you’re getting to the part where you expect to orgasm, it can start to get problematic.

At first, I wasn’t 100 percent sure how to work this thing, but it comes with an instruction manual.

I may have spent more than a few minutes trying to figure out how I was going to get this toy inside my body. But once I stopped being stubborn and actually read the instructions, it was pretty simple. One of the coolest features of the Snail is the ball that rests against your clitoris and stays where you want it.

Whereas most rabbit-type vibrators are more buzzing in their vibrations when it comes to the ears, the Snail has more of a rumbling vibration. Plus, due to the larger surface area of the ball, it spreads the vibration deeper into your body, reaching more of your clitoris beyond just the surface. It’s good stuff for sure.

Is it easy to control?

The Snail has two motors, one in each ball. They operate independently of one another, so if you like more vibration internally (or externally), you can set each motor to a different speed and pattern. Both motors have five speeds and five vibration patterns, which give over 600 combinations for you to choose from. I’m a simple gal, and I doubt I’ll ever go through all those combinations, but they’re nice to have.

Controlling the Snail is simple. Its buttons are on the lower ball, which also doubles as a handhold, and are raised enough to be easy to find while you’re using the toy.

After charging for the recommended 2 hours, I decided it was time to give this toy a try. It’s made from silicone, so water-based lube is your best bet. I took a few minutes to play with the settings and make sure I knew where the buttons were, then sat back to enjoy the ride. In all my years of using sexual wellness items, I’ve never used a toy that performed so well.

Even with vigorous thrusting, the ball for clitoral stimulation never stopped providing vibration nor did it slip and slide away from its targeted spot. Since it’s pretty wide, it covered every place I could imagine wanting vibration with ease.

The insertable portion of the Snail is very rigid, which has its pros and cons. A pro is, that you don’t have to worry about it flopping around while you’re using it. A con is that there’s no give to this toy. After vigorous play, you may find yourself a bit sore. For me, the pros heavily outweigh the cons.

Pros and Cons of The Snail

Nothing is perfect, but this toy comes pretty close. I love the dual stimulation for blended orgasms and have definitely squirted a few times while using it. Although the clitoral stimulation ball moves, unfurling as you thrust the toy, there isn’t any ‘give’ to the rest of the toy. The insertable portion is rigid. This isn’t a con for me, but I can see where it may be uncomfortable for some bodies.

Cleaning the toy is a bit tricky. You’ll need to be sure you’re getting into the curves and bends of the toy and ultimately, rinse all your cleaners away as well. I highly recommend drying this toy when you’ve finished cleaning it, instead of leaving it to dry. There are some nooks and crannies I would be afraid wouldn’t dry completely on their own.