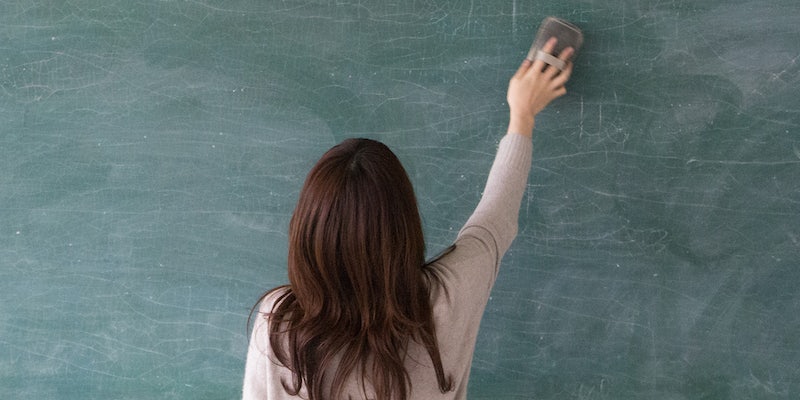 Teachers who do sex work on the side are usually fired. Will they ever be able to claim employment discrimination?

Sarah Seales is the most recent teacher to have lost her position as a result of doing adult labor off-hours, at home. Seales was teaching STEM to fifth graders when she started an OnlyFans page to supplement her paycheck. According to Seales, her OnlyFans page helped her break the “poverty cycle” of being a teacher and a single mom. Not so surprisingly, both Brennan and Halas also cited financial difficulties as their reasons for doing adult work.

Seales continued doing her day job as a teacher while posting nude photos to her OnlyFans at night… until a reporter from the right-wing website Real News Michiana outed her. It’s not clear how the reporter got hold of Seales’ images but whoever sent them went as far as paying the subscription fee and taking screenshots.

The website published Seales’ photos, blacking out what they refer to as her “breasts and vagina.” Her OnlyFans account is consistently described as her “pornography page” throughout the story in an apparent attempt to shame Seales. The school subsequently fired her, claiming she put “its reputation at risk.”

But what about the legality of firing a teacher on such grounds? Can a teacher be legally ousted on reputation alone? Could this employment discrimination?

Law experts are divided on the subject. Employment discrimination, as the Equal Opportunity Employment Commission defines it, does not protect people who do sex work. According to Family Law Attorney Sabrina Shaheen Cronin, JD, MBA, the founder and managing partner of The Cronin Law Firm: “Employment discrimination is when your employer treats you differently based on race, color, religion, sex, national origin, disability, age or genetic information.” A person’s choice to do sex work is not implicit in this law.

And yet, Derek J. Demeri, an employment law attorney in Philadelphia, Pennsylvania, and Mt. Laurel, New Jersey, notes that the federal 1964 Civil Rights Act does prohibit certain practices of discrimination “because of… sex.” While this act has provided protections for women and LGBTQ+ people, Demeri believes it can also apply to sex workers.

According to Demeri, “When there is a policy of discriminating against sex workers, such as not hiring or firing someone, this policy has a disparate impact on women and LGBTQ+ people without any related and consistent business necessity.” The 1964 Civil Rights Act does guard against such discrimination.

Discrimination against sex workers is also often based on gender stereotypes. Such discriminatory practices are similarly defended by the 1964 Civil Rights Act.

The recent case of Nicole Gililland demonstrates how adult workers (and former adult workers) can fight back against discrimination based on gender stereotypes. Though Gililland was not a teacher, she was a nursing student who faced harassment at Southwestern Oregon Community College because of her past career as a porn performer. While a student at the school, Gililland’s instructor told her “it takes a classy woman to be a nurse, and unclassy women… shouldn’t be nurses.” Such a hostile environment ultimately led her to drop out of the program, pushing her into a depression during which she reportedly contemplated suicide.

But Gililland didn’t back down. She sued the school for a breach of contract and for violating Title IX, which prohibits public schools from discriminating on the basis of sex. Although an Oregon jury rejected her Title IX claim, they found the school had breached its contract by violating its non-discrimination policy. Gililland was awarded approximately $1.7 million in damages.

But a student winning a suit because they’ve experienced gender-based harassment at a public school is different than a teacher experiencing the same thing as an employee. Many businesses (and schools included) have clauses and provisions in their contracts that make it impossible for a teacher to claim she’s been unlawfully fired for discrimination because she also does or did sex work.

According to Cronin, “Most workers in America are ‘at-will,’ meaning they can be fired easily for things they do both off the job and on the clock.” In short, many schools don’t have to have a real reason for terminating a teacher’s job.

Michael Fattorosi, a California attorney who specializes in adult-industry law, adds that a school can also fire a teacher who’s done adult work on the grounds that they’ve falsified an employment application. If a school can “claim that the prospect did not reveal their past job,” Fattorosi says, the school can argue that “if they did, they would not have hired them.”

Besides this, Cronin adds that many businesses, including schools, have explicit clauses about having side jobs. Running an OnlyFans account at night while teaching during the day can be regarded as a breach of contract without ever touching on the discriminatory practice of claiming a woman couldn’t do sex work and still be a good teacher.

But even there, Cronin shares that many employment contracts also have a “morals clause” that “gives the employer the right to fire an employee if they act in an unacceptable fashion or if something they do puts the business in a bad light.” According to Cronin, “Morals clauses are becoming more commonplace as Internet-fueled public backlash can harm a company’s bottom line.”

Unfortunately, adult work continues to be viewed as a reputation-tarnishing occupation. Seales was let go for this exact reason—because the school deemed she was bad for their reputation.

This was also the basis for Halas’ firing. She appealed her termination in court but it was rejected by a judge who ruled, “…the ongoing availability of [Halas’s] pornographic materials on the Internet will continue to impede her from being an effective teacher and respected colleague.”

But still, Gililland’s case shows there’s still hope for people who’ve done sex work in the past and want to branch into new industries. The public perception of sex workers is evolving. Sanctioned harassment that might have been waved away as simply a woman’s comeuppance a few years ago is today viewed as a form of discrimination. But our society has a while to go until people come around to the idea that a teacher can have an adult side gig after school or during the summer and still add value to their students’ lives in the classroom.

Nevertheless, Fattorosi asserts that this area of the law is ever-evolving and even opines that a teacher who was terminated from a position at a state school for doing adult work off-hours could possibly claim they were exercising their First Amendment rights. “Therefore, their termination by the state (at any level) would be a violation of their Constitutional rights. Not so much discrimination, but rather a civil rights violation.”

And yet, Michael Elkins, partner and founder at MLE Law in Fort Lauderdale, Florida, scoffs at the idea that running an OnlyFans account is a form of protected speech. “The bottom line is that termination for having an OnlyFans account is a real threat to educators, male or female,” says Elkins, warning teachers to be careful with their privacy settings and online activity. “While it’s not an absolute that a fired educator won’t get their job back, they face a very tough uphill battle.”

Even in the face of such a threat, it’s doubtful this will stop other teachers from moonlighting as adult workers. A starting salary for a teacher in the United States is between $34,000 and $45,000. With rampant inflation and skyrocketing rents and home prices, the added money of adult work will continue to be tempting.

Fueled by the pandemic, OnlyFans has become a popular way to make extra cash. With more and more opportunities online to generate income through adult labor, as well as lessening stigma, people will continue to be enticed to do this work. As such, it’s time that schools come around to the reality that teachers can do adult work in their free time and not impact their ability to teach.

“As long as a teacher is not engaging in sexual activity in front of a minor,” Demeri says, “a school administration has no legitimate or reasonable justification for using what a person does in their private sex life as justification for administering a successful educational environment.” In fact, Demeri shares, “if we take emotionally charged stereotypes out of the equation, teachers would then be judged on their merits and not their private sex life. Isn’t that what ultimately matters?”