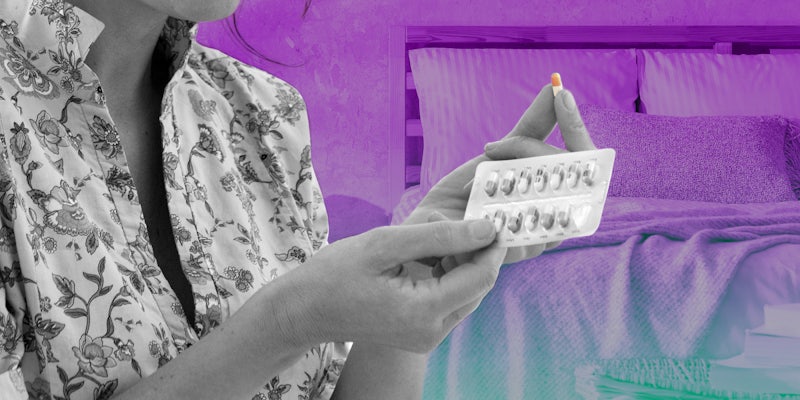 'I wish people would speak about it more, it is not as rare as we think it is!'

“The thing with SSRIs [Selective Serotonin Reuptake Inhibitors] is that they impact you slowly, and you only realize when the boat has sunk,” says Sameera* a 27-year-old woman from India currently on the antidepressant. While Sameera, like many others, does find that the medication has improved her day-to-day functionality, the boat she is talking about is her sex life.

“Not many people talk about these type of [sexual] side-effects …but the low libido has really strained my relationship with my partner… and my self-image. It makes me feel down,” she continues, highlighting the impact that sexual dysfunction can have on women who are already struggling with their mental health.

Across the world in the Netherlands, 20-year-old Kik describes a similar experience with the medication. “I went from having sex four to five times a week, to once in six months. My libido got so low, and sex became very painful.” Like Sameera, Kik also spoke about how the side effects were impacting her relationship: “I started feeling very guilty towards my partner.”

When Kik approached her psychiatrist and general practitioner for advice on how to address the side effects, aside from the paltry advice of “using Vaseline,” they had nothing to offer her. “They just wanted me to accept it as a side-effect,” she said disappointedly. “I had to choose between not wanting to kill myself, or having sex.”

Dr. Laurel Steinberg, a clinical sexologist, agrees that although “SSRIs can be a tremendous help for patients, many patients have reported that they can cause sexual side effects, specifically diminished desire and also an elevated orgasmic threshold.” In layman’s terms, the medication is making it more difficult for a woman to achieve an orgasm.

Does this mean that SSRIs are responsible for widening the orgasm gap, just a bit further?

Steinberg points to research that suggests that SSRIs may be affecting hormones and neurotransmitters, such as testosterone and dopamine. This may lead to side effects of sexual dysfunction, as testosterone may affect sexual arousal and dopamine plays a role in achieving orgasm.

Some individuals can experience this sexual stagnation long after they stop taking the medication. This condition is termed Post-SSRI sexual dysfunction (PSSD), the exact prevalence of this condition is still unknown.

Kate*, a 21-year-old woman from South Africa, described the horror of finding this information on a subreddit. “That people can have these irreversible side-effects [from the medication]…is scary! I wish people would speak about it more, it is not as rare as we think it is!”

This is especially concerning for women, who are not only more likely than men to be on antidepressants, but who have limited support from medicine in treating this condition. For while men have had Viagra, the popular medication used to treat erectile dysfunction since 1998, it took nearly 20 years for the FDA to approve Addyi in 2015, a drug aimed at targeting sexual dysfunction in women. But, like SSRIs, the drug does not come without faults.

Addyi remains controversial due to its “tenacious side-effect profile.” Just last year the drug was put back under FDA spotlight after concerns about reported allergic reactions to the medication. Moreover, not all women are seeing progress, as Addyi can only be used by premenopausal women. Once again, it seems like women’s healthcare, just like our bodies, are “too complicated.”

While women are often blamed for their complicated biology, it may just be that not enough research has gone into understanding our physiology, and what can be done when things do not work as they should.

In fact, a quick search on PubMed depicts that the single term “erectile dysfunction” comes up three times more than nine terms searched together that describe sexual dysfunction experienced by women. This research bias makes it painfully obvious that while sex is considered an important aspect of men’s health, if you are a woman whose sex life has been less than optimal for reasons outside your control, then well… you just have to accept it.

“Suck it up, buttercup” isn’t sound medical advice. But when this is put in the context of our patriarchal society’s views on women’s sexuality, the idea that sexual pleasure is not as important to women as it is to men is nothing new. It is 2022, but women are still punished for wanting sex for just the sake of sex, and a recent study has confirmed that women’s sexual needs and desires are still viewed suspiciously by us all.

Moreover, medical research has a history of ignoring issues important to women, and men’s physiologies are mostly studied in researching diseases, even if women are more likely to experience the disease being researched on a population average. So when the taboo of women’s sex lives is added to the mix, one can only imagine the shock and horror in the science labs.

But people, especially women in need, will always find means to create communities outside of formal structures that are meant to support them, and women too have followed suit. Growing up, I remember Tumblr being this place for a lot of young women. You could find someone who was experiencing what you were from anywhere across the world. Blogs existed where young women would share experiences and seek advice on topics from sex and relationships to mental health.  Nowadays, Reddit forums are a popular and convenient way to ask uncomfortable questions anonymously. Instagram has also become a source of informal mental and sexual advice for those seeking it.

While disseminating medical information via these informal methods comes with concerns about the evidence behind the advice, it is the symptom of a much larger problem: The absence of professional help available to women experiencing sexual dysfunction while dealing with mental health issues.

Many of the women I spoke to felt like they had to choose between their mental health and their sexual health, but Steinberg explains it does not have to be so: “By working closely with your prescriber, doses can be titrated down to a level at which they are both effective at helping with depression and/or anxiety and not high enough to cause as much sexual dysfunction. Alternatively, there are other classes of drugs that can achieve similar improvements in mood and have a lower side-effect profile (such as Wellbutrin).”

Changing entire societal structures is a work in progress, the problems as outlined in this article are complex and nuanced. More research into women’s sexuality and sexual dysfunction in women would be a good start.

Given the impact medication has on women’s mental health, relationships, and self-esteem, healthcare professionals must adopt clearer strategies to support women who are experiencing sexual dysfunction while on SSRIs, and indeed on other kinds of antidepressants. Women shouldn’t have to choose between mental wellness and sexual satisfaction.

Dania Quadri is a writer and medical student from London. She writes about health, culture, lifestyle, and social issues. Say hi to her on Twitter @daniaq16.