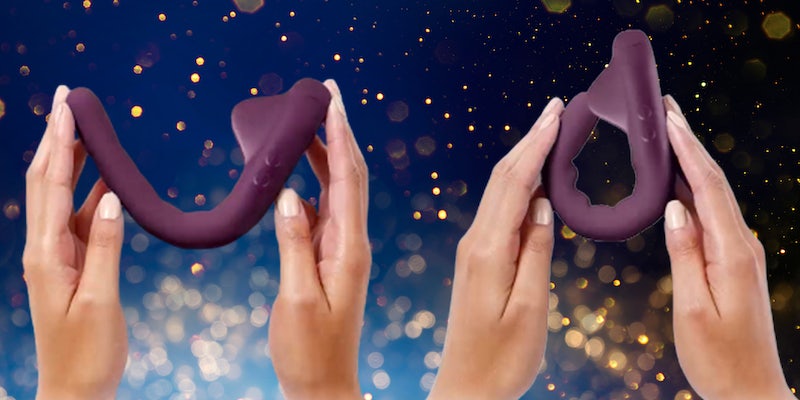 Get bent out of sorts (in a good way!) with MysteryVibe’s Crescendo 2

Sexual wellness companies around the world love telling us they have the next big thing, but rarely are they able to put their money where their mouth is. MysteryVibe does what a lot of companies only talk about—and the unisex Crescendo 2 is evidence of that.

The way it charged was cumbersome. I personally despised it and it really made me not want to use the item once it died the first time. I won’t lie, if a toy isn’t easy to recharge, it will go in a drawer and probably not come back out. But the design of the Crescendo is such that I didn’t relegate it to the place where bad toys go to die.

I voiced my concerns to the company as I’m sure other consumers did. MysteryVibe listened.

Crescendo was developed to mimic human fingers and be infinitely flexible so users can bend it to fit their body, whatever the size. It delivers targeted vibrations precisely where needed to help with sexual health issues and encourages discovery of new erogenous zones.

Crescendo 2 takes this pioneering device to new heights by making all the elements that made Crescendo great even better, including making charging a breeze.

What’s new with the Crescendo 2?

It also bends differently than the original model. Initially, it felt stiffer, but that’s a good thing, as that allows it to stay in shape consistently under pressure. I did notice I wasn’t having to move it back into place as much as I did with the original design, which is awesome when you’re in the middle of playing. The last thing you want is your toy moving where you don’t want, right when you’re about to orgasm.

Crescendo 2’s overall product shape and size were retained from the first model to keep it accessible to various anatomies, across all genders and orientations. We all have preferences when it comes to size, but I like that this company kept things “in the middle” in order to accommodate as many people as possible. Plus, if you were used to the toy in its original incarnation, you’re getting it again—just much improved!

Using the Crescendo 2 in practice

Enough of the techno-speak, what you really want to know is, how well the Crescendo 2 work when you’re actually using it. Well, I can’t speak for everyone, but personally, I can say it’s a real winner. You really can’t go wrong with a device that bends and stays in place, can be used on any type of body, and can be controlled by you or your partner with an app on your phone.

Before getting started, you should charge your new Crescendo 2 for about an hour with the included USB charging cable—this will give you at least two hours of playtime. While you’re waiting, go ahead and download the MysteryVibe app. When the toy is charged, be sure to give it a good washing with mild soap and water. It’s made with medical-grade, body-safe silicone, so please use the appropriate lube so you don’t ruin your new favorite toy.

Once the toy is connected to the app, it will automatically switch to the screen with 12 pre-programmed vibration patterns. You can also download more pre-programmed patterns, create your own pattern, search tags, and change your settings. (Note: you can only have 12 vibration patterns on your playlist/home screen at once, but you don’t lose what you’ve created or downloaded.)

After getting the Crescendo 2 exactly where I wanted it, I grabbed my phone and started swiping through the vibration patterns until I found the one that hit both my G-spot and clit in a way that would do precisely what I wanted. I figured out that if I applied a little pressure to where it entered my body, giving it more contact with my G-spot, I got better results. I also rocked it a bit and in no time, I found myself experiencing a blended orgasm.

Pros and Cons of The Snail

No product is perfect, although this one comes pretty close. Every type of body is different and I think MysteryVibe did a great job trying to accommodate everyone, but I would prefer this toy to be a little thicker. I understand that would make it more difficult to bend, so I definitely don’t take away from how great a product it is.

The app was a little tricky at first as far as connecting the toy to Bluetooth. The original Crescendo had a Bluetooth symbol on the button you were to press, which is how I ended up figuring out what I was doing wrong with the new item.  I would have gotten it through the process of elimination eventually, but it was a little frustrating at first.

However, the toy sets an important precedent for the sexual health industry, proving that medical devices can be beautifully designed to be pleasure-centric. Equally, pleasure devices can be designed from a health perspective and backed by medical evidence.