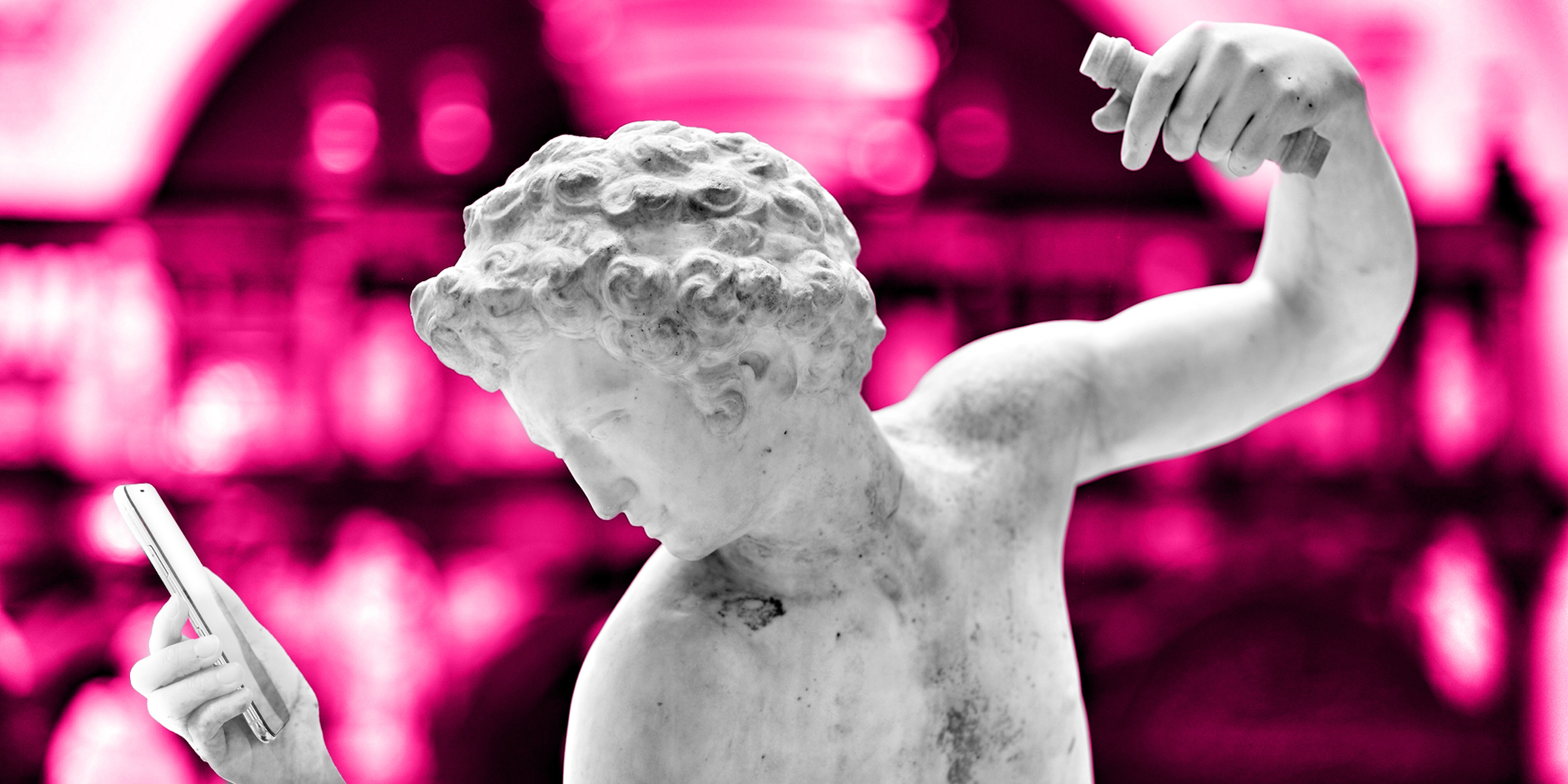 From centerfolds to cellphones: The rise of the male thirst trap

'It left something to the imagination.'

There’s a moment in HBO series Minx when reluctant editor Joyce Prigger acknowledges that including male centerfolds in her feminist magazine is not such a bad thing. “A magazine has got to make you feel something,” she tells her boss, “And seeing a naked guy does that to women. Whether they are curious, or turned on, or just want to laugh at him, it’s the ability to look that makes a woman feel powerful.”

But after watching Minx, I found myself musing that the male centerfold doesn’t hold much of a space in popular culture anymore. The last print issue of Playgirl came out in 2009. Male nudity is no longer seen as a handy way to get women’s attention.

Instead, open Instagram and TikTok and you’ll find a wealth of “thirst traps”—partially-clothed, sexualized images designed to gain attention and excite the viewer. The imagery of the male form, aimed at the female viewer, is now very much about “the tease.”

The modern discourse on the definition of the female gaze has also moved on. Joey Solway, creator of the Amazon series Transparent spoke about the female gaze at the Toronto International Film Festival in 2016. “Thirty years ago culture was all ‘Women.’ Here’s Playgirl and Chippendales!’ And so many women were so happy to have anything, something, that they dutifully bought Playgirl… But it’s kinda—nah. Pass. We don’t want that. Not buying it.”

I did a straw poll on Reddit, asking women if they preferred “thirst traps” over images of naked men. Almost every one of the 40-plus replies said that they weren’t interested in naked photos of a stranger, though they’d be keen if it were their significant other. Most said they preferred thirst traps because it “left something to the imagination.”

Psychologist and sex therapist Dr. David Ley says societal pressures may have a bearing on what women find appealing. “When it comes to mental fantasies of sex, women more often fantasize about people they know, whether in real life, or such as celebrities. There is research that males and females experience porn in different ways. Although both sexes, in general, watch the same forms/types of pornography, females are much more likely to experience physiological arousal to a diversity of material, but not report psychological arousal. [This may] be a consequence of the tremendous social pressures on women to suppress their sexual arousal,” he says.

Evolution of the male thirst trap

Australian male escort and adult star Ryan James has appeared in four of my films, including a solo scene. He regularly posts thirst trap images to his social media pages as part of his marketing strategy. He says they usually get good feedback, though people respond to his overall engagement on the platform, not just the sexy photos. “Letting some personality show through, letting potential clients see you’re a real person and engaging with followers all help. The popular photos seem to be more about the effort put into the overall pic rather than the level of nudity,” he says.

The idea that erotic imagery is equivalent to “objectification” is a fraught one, particularly when people are creating their own images. Dr. Ley says it’s “important to acknowledge the political and social issues that lie behind discussion of the ‘gaze’ when it comes to sex. There’s concerns about feminism and sexual objectification wrapped up in this. Those concerns are important. But our political and social values or attitudes don’t change what turns us on. It’s important that we give people permission to learn about their eroticism from their bodies and reactions, rather than telling them what’s right or wrong for men or women.”

For those making the content, thirst traps can either be a way of expressing sexuality, a form of exhibitionism, or a way to seek validation. Professor of Media and Communication at Swinburne University Kath Albury says that machine-learning algorithms of social media have a huge part to play in the growth of thirst trap imagery. “For content producers, thirst traps can be a way to ‘game the algorithm,’ and get attention for an individual post or new followers for an account. This can lead to slightly contradictory or dissonant content, where, for example, an influencer posts a shirtless pic to accompany his heartfelt post re: the importance of talking about mental health, or homelessness—or some other ‘unsexy’ issue.”

Social media’s inbuilt censorship of sexual material means that thirst traps must be carefully curated to look a certain way. What is considered “sexy” may increasingly be decided by an algorithm.

Professor Albury continues: “Platform recommender systems will boost posts (or hide) posts based on machine-learning based visual recognition systems that assess the amount of skin in the picture. For people marketing content, it’s crucial to understand the kinds of posts their audiences (and the platforms themselves) respond to.”

Violet Blue, author of The Smart Girl’s Guide To Privacy, says corporate control of the public spaces of the internet have “censored accessible sexual expression into tame and non-threatening versions of visual erotica. Algorithms haven’t just stripped the sexiness and sex-positivity out of what we collectively experience online, and discourage discovery and exploration, but have ushered in an era reducing the sexual literacy of generations down to having to choose between sexist, racist, and queer-phobic soft erotica (like thirst traps) and explicit hardcore on tube and sex work creator sites.

“That doesn’t necessarily mean thirst traps are successful because they’re the only game in town, or that no one wants to see that sweet D. Porn consumption and turn-ons have always acted as different kinds of sex stories for different purposes; the explicit stuff to get you where you want to go right away; story, nuance, flirtation, and context for slowing down and spending time with your fantasies. Thirst traps are especially fun because they’re playful and the viewer has express permission to playfully perv on the subject—while the subject, staying within lines of conservative algorithmic punishment, get a ghost of a chance of finding and connecting with more fans.”