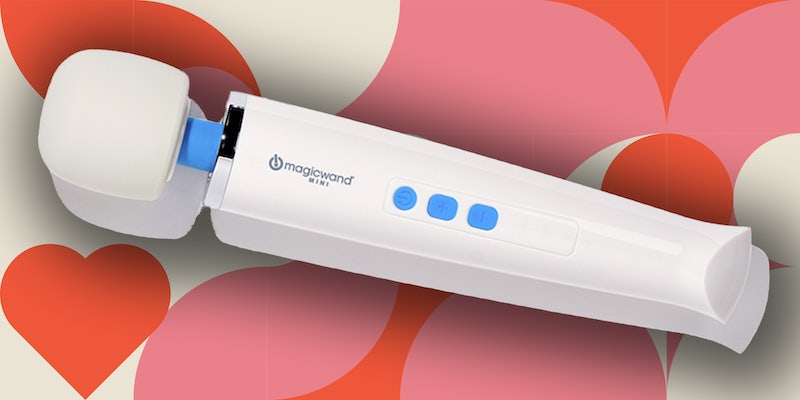 The Magic Wand Mini: a small toy that packs a big punch

I’ve been in a steady relationship with my Magic Wand (formerly Hitachi Magic Wand) since I was 18. It’s hands-down the longest (and most satisfying!) relationship I’ve ever had. The ease and reliability of the Magic Wand make it an absolute must-have in my sex toy repertoire—which is why I was excited to try out its smaller sibling, the Magic Wand Mini.

When the Magic Wand first hit the market, Shay Martin, Vice President of Vibratex, Inc., says it was sold like an appliance at department stores. It didn’t take long until people with vulvas discovered that it could be used for more than, umm, just soothing tired muscles.

What is the Magic Wand Mini?

Since the Magic Wand launched in 1968, there haven’t been many big changes. The most significant change, however, was the simplification of its name. “In the early 2000s, the name Hitachi Magic Wand was changed to just ‘Magic Wand.’ This was done solely to strengthen the focus on the name Magic Wand (which is also the Registered Trademark) as we introduced new models like the Rechargeable and Plus,” says Martin. “No other changes were made, and the Magic Wand Original is still virtually identical to the one released in 1968.” In 2016, Time Magazine named the Magic Wand one of the “Top 10 Most Influential Gadgets of All Time.” Martin estimates that close to 10 million Magic Wands have been sold over the years.

Once a corded-only option, the Magic Wand now offers a rechargeable option for orgasms more than 18 inches away from a power outlet. What a game-changer when it comes to getting off! And if that wasn’t enough, the iconic brand recently released a Magic Wand Mini. In this case, less truly means more.

Why we love the Magic Wand Mini

If you’re new to sex toys, the Magic Wand Mini is a great place to start. Embrace your curiosities and explore! Use it as an all-over massager and see how your body (or your partner’s body) responds to stimulation without making orgasm the end goal.

How to use the Magic Wand Mini

First things first! Wipe the silicone head with a damp cloth, mild soap, or a sex toy cleaner. Be careful not to submerge the toy since it’s not water-resistant.

Next, charge your Magic Wand Mini (it should take 150 minutes to reach a full charge).

When the wand is charged, turn it on. Cycle through the four speeds and play with the sensations. For example, I like to start on my inner arm or thigh to get a sense of how a new toy feels before touching my genitals. (FYI: the Magic Wand Mini is meant for external use only.)

Ready to play? Okay. Grab some water-based lube and smear it on the head. Even if you’re aroused, a layer of lube can intensify the sensations.

Start low and slow, as in the first setting. If the sensation is too powerful, try using the wand over underwear or a sock over its head.

Get comfy as you start to figure out what does (and doesn’t) feel good. Sit back, breathe, and relax into the pleasure. Even though wand vibes are meant for external stimulation, their deep rumbles stimulate the internal clitoris, a complex network of erectile tissue, and roughly 8,000 nerve endings. Unfortunately, most people are only familiar with the visible bulb that sits above the vaginal opening, the pathway to orgasm for so many people with vulvas. (A 2017 study published in the journal Sex and Marital Therapy found that only 18% of women can orgasm from vaginal penetration alone. The rest either require or prefer clitoral stimulation to orgasm during intercourse.)

Pros of the Magic Wand Mini:

Cons of the Magic Wand Mini:

The bottom line? There’s a reason this mighty massager has been the best-selling personal massager for more than three decades. So, if you’re looking for a discreet, travel-sized version of a tried-and-true sex toy, this wand is for you. It’s small, yet mighty, and lives up to its big sibling’s “Cadillac of Sex Toys” cred.

Ryn Pfeuffer is a queer sex and relationships writer, and over the past two decades, her work has appeared in more than 100 media outlets including Marie Claire, Men's Health, Playboy, The Globe and Mail, The Washington Post, and WIRED. Ryn is also the author of 101 Ways to Rock Online Dating (2019). She lives in Seattle with her partner and rescue dog, Mimi.