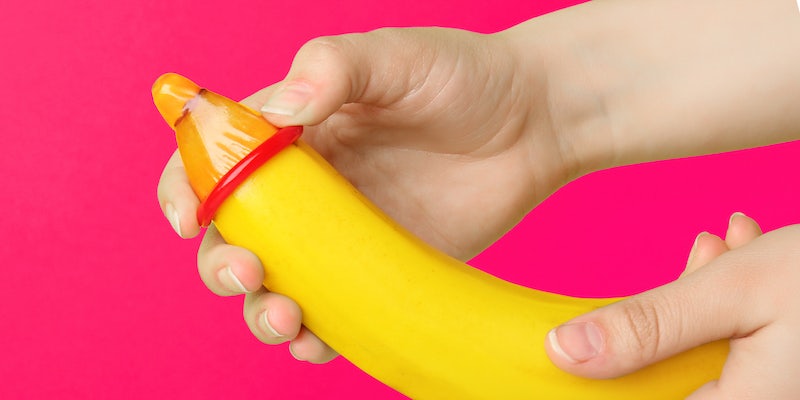 Everything you ever needed to know about putting on a condom

“Wear protection!” It’s an extremely common refrain, featured in everything from after-school PSAs, “very special episodes”, and prom themes on the Golden Girls. But despite being everywhere, condoms can still be quite mysterious—even intimidating—if you’ve suffered through the American education system’s idea of sex ed. Tons of people are never taught how to put on a condom.

Don’t be embarrassed. There are millions of people with questions about how to properly use protection. Here’s everything you need to know about condoms.

What kinds of condoms are there?

Almost every condom brand offers a variety of latex options, in multiple sizes, thicknesses, and designs guaranteed to increase sensation and enjoyment. Latex can also be made of synthetic, petroleum-based polymers. Despite its widespread popularity, latex is also a common allergen and can cause worsening symptoms with repeated exposure.

Polyurethane condoms are made from a common form of plastic and are rated to prevent STIs and pregnancy by the FDA. They’re extremely resistant to water, oil, and heat making them a popular alternative to latex. Polyurethane is also thinner than latex, making it preferable for those that appreciate improved sensitivity.

Because it is plastic, polyurethane provides a looser fit than standard latex. This is a benefit for some, but it can make condoms more likely to slip off than other options. These condoms are also more expensive than latex, lambskin, and polyisoprene.

Polyisoprene condoms are made of synthetic latex. Despite this, they’re very commonly recommended to those with latex allergies. This is because most latex allergies are caused by plant proteins in the fluid, not latex itself. Because polyisoprene is entirely manufactured in a sterile lab environment, it offers most of the same benefits as latex without the itching and burning sensation.

Lambskin, also called “natural,” condoms, date back to the Roman Empire. These are made from the intestinal lining of a lamb making them an animal-based product and off-limits for die-hard vegans. The FDA rates these as 98% effective at preventing pregnancy when worn correctly, however, they provide almost no protection against STIs.

This means lambskin condoms are best used in long-term, committed relationships where both partners are tested often. The benefits of using lambskin include being biodegradable, safe to use with oil-based lubricants, and better at transmitting heat. Lambskin condoms are often the most expensive option on the shelf and require a small drawstring to hold them in place.

How effective are condoms?

The most common style of condoms on the market, external condoms fit snugly over a penis. The design of external condoms allows for a small reservoir at the tip to catch semen, preventing it from entering the vagina. External condoms, when worn correctly, are 98% effective at preventing pregnancy and the spread of STIs.

The addition of lubricant always improves sex. Always. But every lube is not compatible with every condom. Water-based lubes are always the safest option but silicone-based lubes can be used with latex, polyurethane, and polyisoprene condoms. You should never use oil-based lubes or oils with rubber or plastic because they can cause condoms to degrade or break while being worn.

How to put on a condom

Before putting a condom on, you should inspect the package for rips, tears, holes, or other damage. While prophylactics are extremely effective, but only when they’re structurally sound and worn properly. After ensuring the packaging is intact, carefully tear the package open with your fingers. Never use your teeth, scissors, or a knife.

Carefully unroll the condom in the correct direction. If you’re using an external prophylactic, carefully roll the condom over your, or your partner’s, penis. If you’re uncircumcised, you’ll need to pull the foreskin back before this step. Finally, make sure to pinch the tip of the condom to remove any air bubbles and double-check the fit. If the condom is too loose, it can slip off. If it’s too tight you run the risk of it breaking.

To insert an internal condom, it can help to use lube first. Gently squeeze the inner ring of the closed end and insert it into the vagina or anus. Using your finger, push the inner ring upwards towards the cervix, leaving the outer ring outside the body.

What happens if a condom breaks or slips off?

If you feel a condom break or slip off during sex, you should always stop immediately. If pregnancy is not a concern, you can always grab another and pick up where you left off but remember to always pee after sex to help prevent UTIs. Never reuse a condom, even if you didn’t ejaculate in it.

If you are concerned about pregnancy, it’s not a bad idea to get your hands on emergency contraception, also called Plan B or the Morning After Pill. Plan B should always be taken within 72 hours of unprotected sex, but the longer you wait, the less effective it becomes.

Because the pill is hormonal, there can be some side effects like your period coming earlier than expected or PMS symptoms. Plan B ranges in price from $11-$50 depending on the brand, your pharmacy, and your insurance. You can also buy Plan B ahead of time.

Plan B may not work for you if you weigh more than 165 lbs but Planned Parenthood has a tool to help you choose the best emergency contraception. Remember, Plan B can’t terminate a pregnancy—it only prevents pregnancy from happening.

Once you decide what kind of condom works best for your needs, it’s just a matter of choosing what style is most appealing.

P.S. Condoms is a brand that’s paraben, glycerin, and BPA-free and vegan, making it an ideal one-stop-shop for eco-friendly and health-conscious shoppers. For one low monthly fee, P.S. Condoms will send the best condoms on earth directly to your door.

Its latex condoms are free of animal byproducts, they’re also odorless and transparent. They’ve been field tested by the Daily Dot, and are the real deal. And, while P.S. condoms are pre-lubricated with medical-grade silicone, the brand also sells a water-based lube that’s safe for use with latex and silicone. The wrapper is even silent and won’t crinkle in your pocket.

P.S. Condoms are $19 for a 12-pack if you make a one-time purchase, but just $16.15 if you subscribe. That’s a 15% savings just for wrapping it up every month. While they’re a little more than the condoms at the grocery store, P.S. Condoms’ mix of easy monthly delivery and incredible quality is worth it.

If you want to avoid a subscription service, you can find great savings at online sex stores like Lovehoney.

Lovehoney has a wide variety of prophylactics available including flavored, textured, and pre-lubricated options. For oral sex, the One Flavor Waves latex condoms are my personal favorite. For anything else, I always keep a box of Trojan Bareskin condoms next to my bed.

What matters most is that you always wear protection when you have sex with a new partner or without another form of birth control. Keep safe so you can keep being sexy in the future.

Adrie Rose is a freelance writer and photographer from Pittsburgh, PA. She writes primarily about sex, sex work, and how they intersect with tech and culture. Her hobbies include being just like other girls, drinking craft beer, and reading romance novels with questionable love interests.