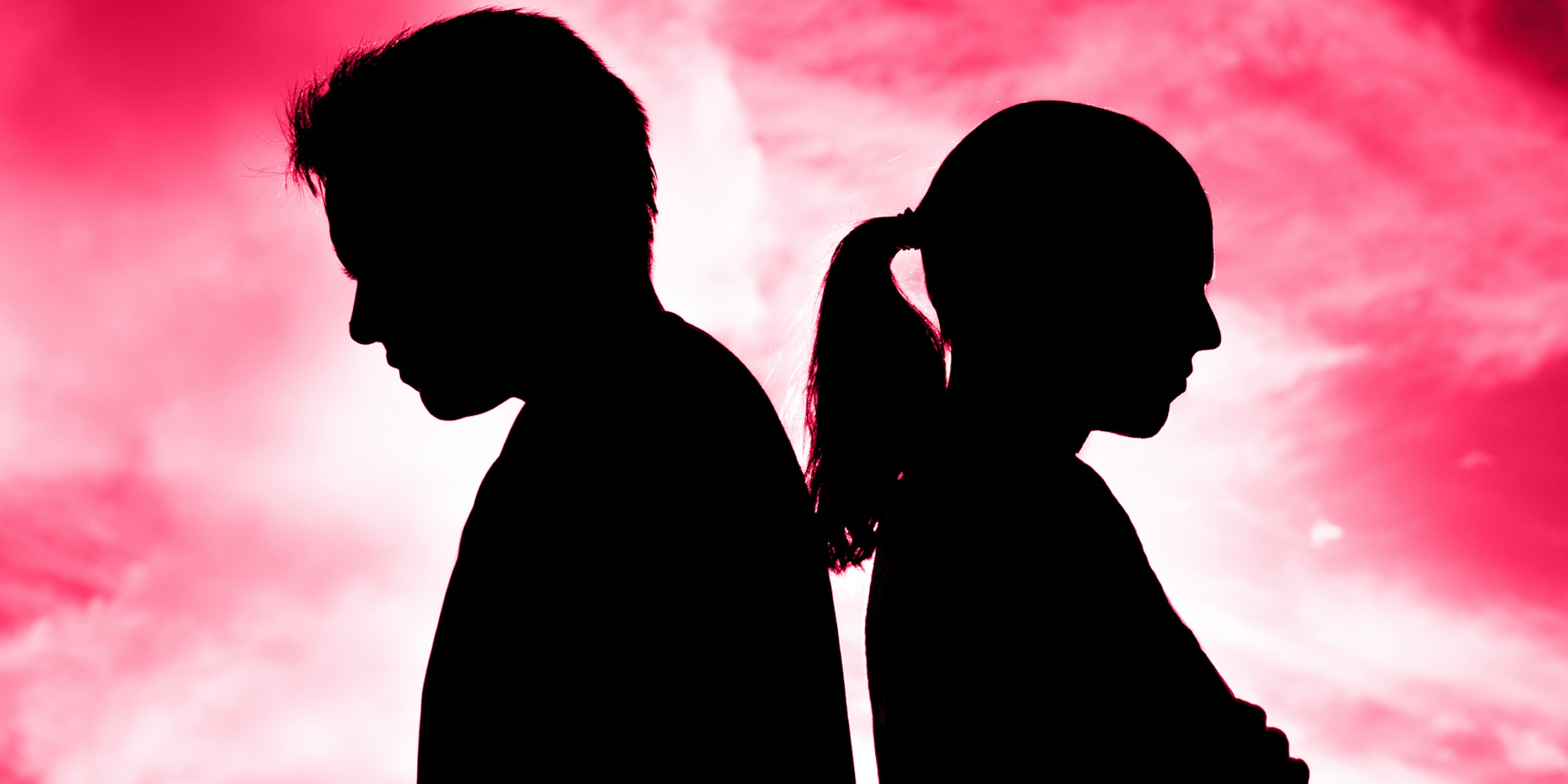 Sex workers want love and respect in relationships. Why is that too much to ask for?

'It’s not uncommon, or even particularly difficult, to love a sex worker.'

Names have been shortened to protect the identities of interviewees.

Sex workers are expected to carry the weight of society’s norms and taboos. We’re not really seen as complex people so much as billboard-sized reflections of the larger population’s ever-changing, yet not evolving, views on sex. Our standard operating procedure as sex workers—communicating, establishing boundaries, and maintaining a nuanced understanding of evolving consent—is incompatible with a society that claims the good and righteous path to romantic success is characterized by gaslighting, financial inequity, and outright abuse in some cases.

One need only look at r/AmItheAsshole, r/relationships, or popular dating shows like Love Island and Love Is Blind to understand how deeply ingrained these disturbing trends are in dating. For six seasons, the Jersey Shore audience was captivated by the live emotional and verbal abuse directed at Sammi Giancola by her partner, Ronnie Ortiz-Magro. Rumors of grooming, gaslighting, and infidelity have plagued the long-suffering Kirk and Rasheeda Frost of Love & Hip-Hop: Atlanta fame since the show first aired. People love books and movies like 50 Shades of Grey and the 365 Days trilogy that feature unhealthy, obsessive relationships portrayed as sexy and kinky.

While these are obviously sensationalized examples, they do reflect larger, more concerning trends that countless young adults are taught to internalize as normal. The generalization of the larger dating culture may feel hyperbolic, but after my experience of almost two decades of traditionally compulsory heterosexuality and rejecting internalized whorephobia, it’s one I feel comfortable making.

In my early dating experience, the inescapably whorephobic and queer antagonistic social training we learned in adolescence ensured that we, as young adults, were all but incapable of interacting with another gender outside of a sexual context. This purity culture was a form of sexualization in and of itself. From birth, we raise children to exist amid an onslaught of conflicting messaging regarding sex. Comprehensive sex education is denied to children of all ages for fear it will normalize deviant sexual behaviors despite all evidence to the contrary. We teach children to fear gendered expectations of themselves and others, respectively, instead of illuminating commonalities that cement the foundations of long-lasting relationships. And we teach adolescents to value longevity in romantic partnerships and individual bragging rights over mutual satisfaction and benefit. Rigid definitions of fidelity and purity override opportunities to explore and establish other, more accurate definitions of our own sexuality—and a community to learn with and from.

The sociopolitical links between the sex worker and queer communities are not a new discovery, even if they remain novel to most. By virtue of their continued existence inside of a larger culture dedicated to their eradication, both queer individuals and sex-working people have been forced to spend considerable time dismantling illogical, Christian-centered, and patriarchal notions of normalcy. Of course, the queer community is over-represented as a demographic inside the sex industry, so these commonalities should come as no surprise. Despite, or maybe because of, these accepted truths, most sex workers I know—particularly the queer ones—exist in happy, healthy relationships rooted in openness, honesty, and radical communication.

My own conclusions about my expectations for and from a relationship are a direct result of my own journey through sexuality and my radicalization as a sex worker. I credit the longevity and evolution of my own decade-long relationship largely to the same. Like anyone else, I have moments of doubt and the occasional urge to break up, but I also had to stop and tell him how much I love him while reflecting on our relationship while writing this, so I’m pretty sure it’s real.

For me, and so many other sex workers, polyamory was a foregone conclusion in ensuring the success of our relationships. Much of my own thinking was influenced by Matthew Maniaci’s assertion that one romantic partner need not fulfill all our social and emotional needs.

J, a transgender escort from the Bay Area, has come to similar conclusions in their own 9-year relationship. While they often see others, their partner is their longest commitment, even predating their entry into sex work. While their immersion in the sex industry was a gradual one, they expected their partner to get on board. “I would absolutely end any relationship over being told that I had to stop doing sex work,” they said. “I would treat that as them saying, ‘I don’t want you to have [financial] security or independence.’” After growing up with a staunchly feminist mother and grandmother who emphasized the importance of financial independence, sex work was a logical path to getting their needs met. For J, the financial security provided by sex work allows them the option to live alone and pursue civilian work that fulfills them. “At this point, sex work is my backup. [My partner and I] tried living together and it didn’t work out, but there’s no way I’d be able to afford my lifestyle without sex work.”

Undoing harmful stereotypes and prejudices toward sex workers is a difficult enough task, but it is unavoidable in any relationship where the lines between transaction and intimacy must be so clearly defined. J says therapy helped their partner unlearn harmful beliefs about sex work: “I think that would have been a good idea with other partners I’ve had.” J continued, “To just send them to do their homework instead of having the conversation with them.”

This mirrors my own experience in a long-term relationship. Individual therapy began important conversations on the fundamental difference between trading an hour of sexual gratification for money and the intimacy formed between two people after years of sharing lives. This is something the stigma around sex work, and in turn, sex workers, often fail to recognize: Sex work and sex as part of love can be separated.

Among the sex workers I spoke to, therapy was a key factor in helping their partners respect and accept their labor. N, a traveling escort based outside of the U.S., said her boyfriend’s therapist was instrumental in helping him accept her career. Past infidelities had left N’s boyfriend with lingering insecurities, but according to N, who has extensive experience setting boundaries with her BDSM-seeking clients, those insecurities “had nothing to do with me.”

“This [sex work] isn’t that [cheating],” N said. “It was his work to be OK with it and work through his issues.”

N may seem inflexible when it comes to her work, but she admits she would consider changing up her client offerings if her partner requested it. “If he feels uncomfortable with something, I can absolutely consider not doing that anymore,” she said. “At the same time, I think I would want to handle the deeper issue of ‘Why don’t you want me doing this with clients?’”

Personally, I can’t say that I’ve ever thought of how I would answer such a request as I make it a point to rarely, if ever, discuss sex work with my partner. I developed the policy of not discussing work at home the first year I started teaching. I also stopped drinking at the same time.

For J, any such conversations on the distinctions between sex for work and sex for pleasure are usually related to their well-being: “I think that [my partner] would probably be happier if I had the ability to do this work safely or didn’t have to live under the threat of criminalization.”

Most, if not all, sex workers and their partners have concerns about the ongoing criminalization of sex work. As my partner is disabled and unable to work, I would be the sole breadwinner for a joint household. Post SESTA-FOSTA, this is a legal and financial nightmare that makes my partner especially vulnerable to prosecution as a pimp who profits from the sexual commercialization of another person. For other sex workers, renting is a logistical minefield when landlords and property management companies outright discriminate against them for their occupation or a lack of paystubs. Joint bank accounts are another hell as financial institutions are emboldened to be openly hostile to those in the sex industry. Bureaucratic red tape aside, the social implications of partnering with someone that sells sex are enough to give most, relatively liberal-minded, people pause.

The chance of being reported to authorities or shunned for your work makes typically mundane relationship concerns like family, travel, and finances especially fraught, but having those difficult conversations early on can build stronger relationships. This is true for L, a New York-based content creator and escort, and their partner. They’ve both agreed, for example, not to discuss L’s occupation, beyond calling it “modeling,” with their partner’s Jehovah’s Witness family. “On the whole, we’re both very open about it in social settings. But with less progressive co-workers or family members—mine or his—we just don’t bring it up, or we say I’m a model.”

The conversation on disclosure was a relatively easy one given their partner’s past relationships with other sex workers. “He had some knowledge, having dated other people in the industry. Of course, [there are] always small things and microaggressions that are automatic for civilians, but it wasn’t a big issue upfront. I even put [that I’m a sex worker] on my Tinder profile.”

For L, who struggled with coming out to their Catholic family, discriminatory attitudes have serious implications inside and outside of their families. “I’m sure that [religion] was a big factor in some of the homophobia I faced, but I think that attitudes about sex work are across the board. Most people just aren’t fairly knowledgeable about it.”

This is not an isolated experience. These discriminatory attitudes are so pervasive they’ve influenced how sex workers find housing, seek other employment, and navigate travel across the globe. L says they worry when traveling, even for fun, that the criminalization of sex work in the U.S. will keep them from returning home. “You don’t know which rumors to put stock in when it comes to [airport] security and criminalization. You hear about Canadian workers [being detained] when coming into the U.S.”

This mirrors my own feelings as a first-generation child of immigrants with dual citizenship. I worry constantly that I, or my partner, will be detained when traveling, even with a U.S. passport. For L, being face out, an industry term for public-facing, means “that cat is mostly already out of the bag,” but admits it’s a complication.

While conducting these interviews, I recognized so many similarities between these sex workers’ relationships and my own 9-year relationship. It was a little humbling to realize that there’s nothing particularly groundbreaking or hashtag worthy about my own partner. I think he’s (usually) fantastic but he’s not unique. My partner has had to undergo the same introspective process that many other partners of sex workers have had to face—which, I suppose, is the point. There are periods of difficulty, especially when your existence is considered a dinner table debate topic or legislative bullet point, but making the choice to show up every day, for another person, should never warrant 1,500 words of explanation. It’s not uncommon, or even particularly difficult, to love a sex worker.

Adrie Rose is a freelance writer and photographer from Pittsburgh, PA. She writes primarily about sex, sex work, and how they intersect with tech and culture. Her hobbies include being just like other girls, drinking craft beer, and reading romance novels with questionable love interests.