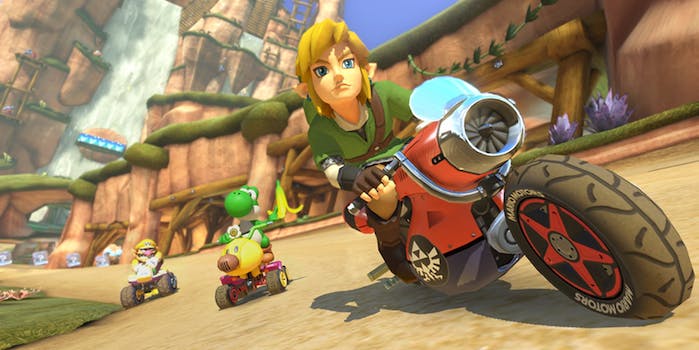 Nintendo is embracing DLC in a major way.

Could it be happening? The Smash Bros/Mario Kart crossover we’ve all been waiting for? It seems like the go-kart wheels of hope are turning in our favor. Nintendo of America has officially announced two new DLC packs for the United States. Players will be able to finally play as characters outside of the Mario universe.

The first DLC pack will run you $7.99 this November. The DLC will not only include Link, but also Tanooki Mario and Cat Peachm, as well as four new karts and eight new tracks. One of the karts will be inspired by Nintendo’s futuristic racing franchise, F-Zero. A new track will also take inspiration from the Legend of Zelda universe.

The fun doesn’t stop there. The second DLC pack will hit in May 2015. That pack will include the Villager and Isabelle from Animal Crossing, as well as Dry Bowser. Just as in the Legend of Zelda X Mario Kart DLC, it will also include four new karts and eight new tracks, including a course inspired by the Animal Crossing universe.

You can bundle and buy both for a 25 percent discount at $11.99. The pack is available for pre-order today, and if you decide to buy the bundle, you get eight new Yoshi and Shyguy colors immediately.

By May 2015, players will have essentially expanded their Mario Kart 8 game by a third. It’s great to see Nintendo embracing DLC. Here’s hoping it follows suit with Smash Bros for Wii U and 3DS.