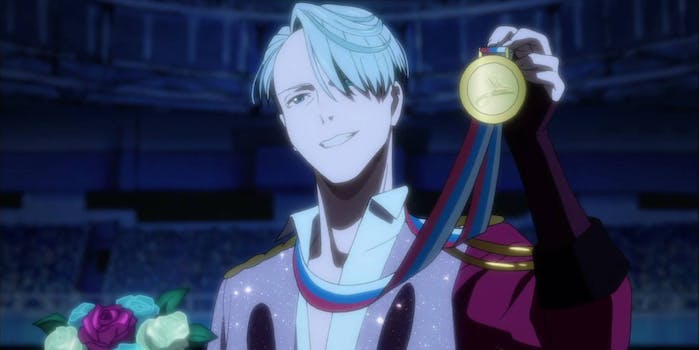 They brought the animated figure skating to life.

Yuri on Ice is in an unusual position when it comes to fanart. The whole show is dedicated to a specific art form, but it’s not something you can really teach yourself at home. Figure skating requires years of training, and the show’s choreographer is used to working with Olympic-level athletes.

Still, Yuri on Ice fans have worked hard to recreate the figure skating routines from the show. One of the most popular options is Yuri Katsuki’s “Eros” program, performed here by Joel Minas.

Minas is one of many amateur skaters in Yuri on Ice fandom, and he recently filmed a version of Yuri Plisetsky’s “Agape” program as well. Elsewhere, a skater named Patton Chen recreated a different angle on “Eros” with side-by-side comparisons to the anime.

While there’s no way for an amateur skater to copy the perilous quad jumps performed by the champions of Yuri on Ice, these skating videos are still intimidatingly impressive. The show usually intersperses the skating scenes with shots of the crowd, and the skating itself is animated from multiple angles. That means if you want to follow the choreography, you have to knit it together from a series of clips.

Detail-oriented Yuri on Ice fans have choreographer Kenji Miyamoto to thank for all this. As a former ice dancer turned choreographer for Japanese skating stars like like Yuzuru Hanyu, he performed all of the show’s choreography for the animators, who then used rotoscoping techniques to make the animated skating look realistic. You can see him at work in this behind-the-scenes video for Victor Nikiforov’s “Stay Close To Me” choreography.

Of course, we couldn’t talk about the show’s skating scenes without including the one that appears in every episode: “History Maker,” the credits sequence featuring Victor and both of the two Yuris.  Yuri on Ice fans Diane Zhou and Sabina Chen filmed a fantastic version in celebration of the season finale—a difficult feat, since the credits sequence is more abstract than the traditional look of the skating competition scenes.

We look forward to the day when a professional skater decides to compete with some music from Yuri on Ice. Considering the show’s popularity in the skating community, it seems virtually inevitable.