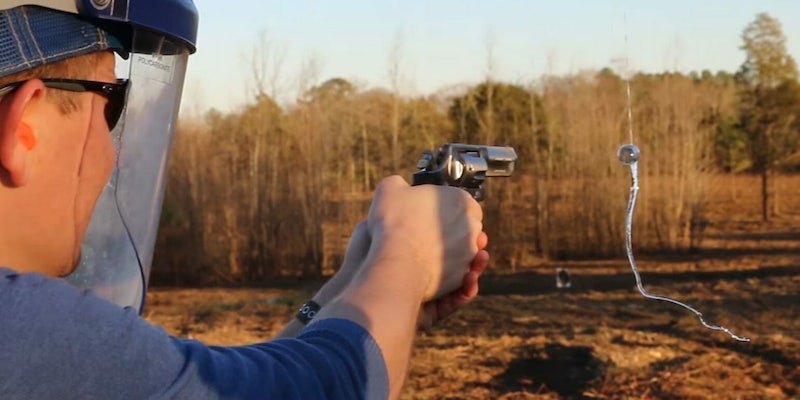 YouTuber proves an ordinary piece of glass can be stronger than a .38 caliber bullet

Destin Sandlin, host and creator of the immensely popular Smarter Every Day YouTube channel, isn’t done testing out the strength of the fascinating Prince Rupert’s Drop.

Prince Rupert’s Drops are tadpole-shaped glass beads created by dipping molten glass into cold water. The head of the resulting glass structure is said to be strong enough to withstand being struck by a hammer or even a bullet, while the tail is so fragile that any touch will cause the entire piece of glass to shatter.

In December, Sandlin tested that theory. He shot the head of a Prince Rupert’s Drop with a .22 caliber bullet. The glass exploded—not at the point of impact, but starting from the end of the tail. Some of his viewers weren’t pleased with the results. They thought the glass shattered because the standard lead bullet splattered when it made impact. Rupert, determined to appease his nearly 5 million subscribers, recreated the experiment using full metal jacket .22 Magnum and .38 Special cartridges designed to keep their shape when striking objects.

The results of his experiment are unexpected.

As you can see, the Prince Rupert’s Drop swatted the bullet away like it was a fly. Even the .38 Special, which struck the drop directly on the front of its head, splintered into little pieces, while the tadpole-shaped glass was only pushed by the bullet’s impact. It’s hard to even see the point of impact on the glass after it’d been shot.

The elated YouTube host says he isn’t done testing his indestructible drop, “obviously we can’t rest here. I’m going to do this with bigger guns.”