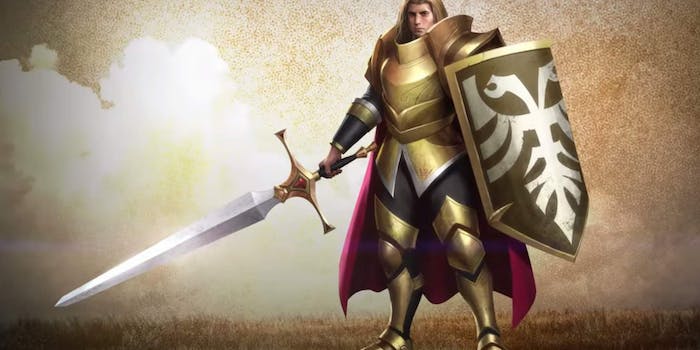 You can now play video games right on YouTube

Too bad it's not very good.

Following reports that the site might buy the live gaming streaming site Twitch, YouTube has for the first time embedded a video game directly into its site: Blades of Excalibur, one of the most lucrative Chinese games of 2013 with $100 million in revenue.

Blades of Excalibur, currently in something that YouTube calls “pre-beta,”offers two modes: multiplayer fighting arena and side-scrolling beat-em-up. It’s free-to-play, but offers pay options later in the game. In China, it was set in a mythical ancient China during the Three Kingdoms period. Adapted to the West, the game is now set in medieval England with a story about King Arthur and Merlin.

YouTube has shed precious little light on how and why it decided to embed the game, but the implications are big. With a gargantuan global infrastructure, the site has the potential to deliver major titles in a browser to the entire world. Offering big games that are free and easy to dive into has proven a lucrative business plan.

Originally called Three Kingdoms Action when it was released in China last year, the game was published by Kabam and accounts for a third of the company’s entire 2013 gross profits. Kabam is now embarking on a $50 million American development program that will see the launch of 30 games in the U.S.

“Gamers are increasingly turning to YouTube to showcase and discuss gameplay, and being on this platform is another way for us to reach this audience,” Kabam senior marketing manager Kimberly Pointer told Recode. “Kabam worked with our partners at Google from concept to launch.”

Despite its Eastern success, Blades of Excalibur doesn’t seem to have taken off in the West quite yet. The game’s beat-em-up mode is oddly satisfying as you cut down wave after wave of soldiers and commanders, though to succeed you’ll need to click with the kind of speed that might bring an immediate case of carpal tunnel syndrome.

The fighting arena is supposed to be the jewel of the game, described by the publishers as a tech marvel that will be the first web-based game to rival the speed, responsiveness, and graphics of a console. But when we played the beta, we found it be slow and, frankly, boring. And it doesn’t look like we’re the only ones: The videos that sit beside the new Flash game have, at most, barely over 1,000 views each. There’s no data on how many times the actual game has been played.