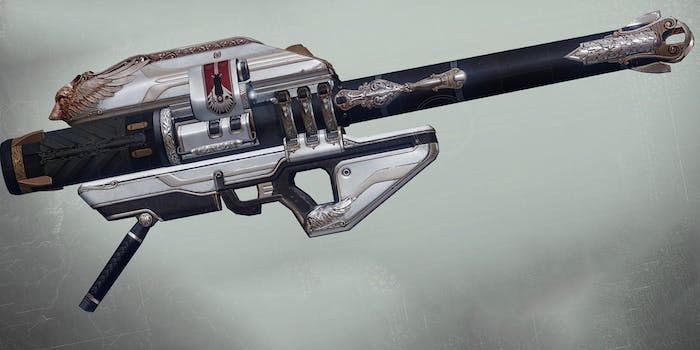 The beginning of the end for Destiny's most famous weapon.

Destiny players break down into two groups: Those who have Gjallarhorn and love it, and those who don’t.

Xur, the purveyor of rare and powerful goods who shows up at a random location in Destiny every Friday and Saturday is finally once again selling the rocket launcher named Gjallarhorn, the one-size-fits-all solution to every difficult boss battle in the game.

Gjallarhorn’s rockets track targets, and do a tremendous amount of damage. After the initial detonation the warhead breaks up into a cluster of submunitions that also track targets, and do tremendous amounts of damage. When three people with a fully leveled Gjallarhorn open fire with Gjally (as Destiny players affectionately refer to it), whatever they’re after is going to die.

Once upon a time, Gjallarhorn was in regular rotation as a weapon sold by Xur, who is in the game to make sure everyone has some chance to score Destiny’s best weapons. When it became clear just how ridiculously powerful and unbalanced Gjallarhorn was, Bungie purportedly messed with Xur’s coding so he would never sell the weapon again.

So began Destiny players’ quests to find Gjallarhorn via pulling the virtual slot machine handle at the end of every mission. When people found Gjallarhorn they were therefore predictably out-of-their-minds excited. Some more than others, as the following YouTube compilation makes clear.

There are hundreds of videos like that on YouTube. The Gjallarhorn phenomena is so huge that even Howard Stern was talking about it last month.

Gjallarhorn is so stupidly powerful that when Destiny players are looking for groups for endgame Nightfall Strikes or Raids, they will often not allow anyone who doesn’t own Gjally to come along for the Strike or Raid. The problem has grown so pervasive that Bungie is nerfing (downgrading) Gjallarhorn as part of a game-wide weapon rebalancing effort to prep players for the upcoming expansion The Taken King, that kicks off Year Two of Destiny.

This is why Bungie is finally allowing Xur to sell Gjallarhorn once again, obviously, to make sure that every Destiny player has a fair chance to enjoy the weapon of legend before it is made less relevant. Just as some players finally get their Gjallarhorn, Bungie will make Gjally worth less than ever before.

May the legend of Gjallarhorn never die.

Update, 4:11pm CT, Aug. 14: Developer Bungie has told Forbes that it has nothing to do with Xur’s sale of Gjallarhorn, maintaining Bungie’s historical position that Xur’s inventory has always been randomly determined.