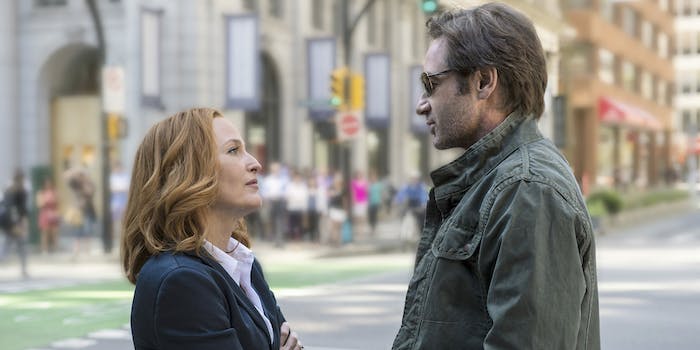 ‘X-Files’ season 11 has a real problem with female writers

Only six women have received writing credits in the show's 10-season run.

The X-Files will return for an eleventh season next year, written exclusively by men.

Indiewire pointed out this discrepancy after the full writing team was announced on Monday. Showrunner Chris Carter is back with a team of veteran X-Files writers, along with three new faces: Gabe Rotter and Benjamin Van Allen (a pair of writers’ assistants on seasons 9 and 10), and Brad Follmer (Carter’s former personal assistant.)

IMDb confirms that while all three have worked behind the scenes of the X-Files, only one has an actual writing credit to his name. Benjamin Van Allen wrote a short film in 2010.

On a personal level, it’s a little unfair to scrutinize new writers in such detail. After all, everyone has to start somewhere. But as a whole, this decision sends a poor message to the X-Files’ many female fans. Only six women have written for the X-Files over the course of 208 episodes and two movies, and three of them shared their credit with a man. That’s a worse ratio than Star Trek‘s original series in the 1960s, which employed six women writers during its three-season run.

This situation calls back to the pay gap between the two lead stars, when David Duchovny infamously earned more than Gillian Anderson during earlier seasons. Anderson achieved equal pay in later seasons, but was initially offered half Duchovny’s salary for the 2016 revival—despite maintaining a flourishing career outside the X-Files.

It’s not wholly unusual for TV shows to hire an all-male writing staff, but that doesn’t make it acceptable. It’s especially unacceptable for the X-Files, which boasts a passionate audience of female fans. And between the two leads, Scully arguably had a greater cultural impact. She led to the well-documented phenomenon known as the “Scully Effect,” inspiring a generation of women to pursue careers in science and law enforcement. How can Chris Carter uphold the legacy of such a character, when he’s not following that example in his own workplace?