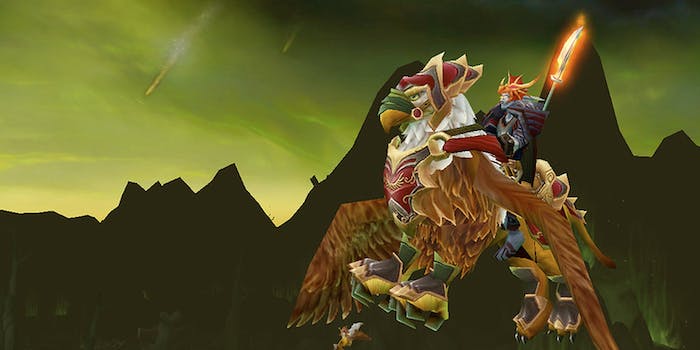 A case of extreme irony sparks lawsuits in Australia.

This is one crime that can’t be blamed on goblins.

After amassing a fortune in World of Warcraft resources, Australian nurse Kristina Finchman sold her virtual goods to other players, netting a good deal of real-world money—$75,000 AUD in all. She invested that sum in actual gold bullion, which was promptly stolen from her house.

This was back in 2008. Between then and now, Finchman decided to sue her insurance company, AAMI, for refusing to reimburse her for the loss of 75 gold bars. AAMI then countersued, claiming that Finchman arranged the theft in order to commit insurance fraud.

The resulting trial, expected to last five days, will delve into the odd but potentially lucrative business of “gold farming,” in which a player enters a MMORPG or similar game not for entertainment but to locate, dig up, or otherwise harvest virtual items that can be sold to other players at a profit. According to the Adelaide Advertiser, which first reported on the case:

In 2005, it was estimated there were more than 100,000 full-time gold farmers in China alone, with that country accounting for $300 million of the global economy.

In 2006, gold farming was recognised as a legitimate income source by the Australian Taxation Office and must be included in a person’s tax return.

Finchman had been working as a nurse by day and staying up all night to obtain and trade goods in World of Warcraft from what her barrister described as a registered home business. Finding checks and money orders too complicated for her purposes, she took payments in cash, finally converting much of that into real gold.

But when she left town for a week, her house was burglarized three times, and the safe containing the bullion was among the items that went missing. Despite AAMI’s investigation into her, Finchman maintains her innocence and further claims that her boyfriend at the time tipped off thieves about the gold, “in exchange for the measly sum of $500.”

A measly sum indeed when you consider that Finchman was raking in anywhere from $200 to $700 every night she played World of Warcraft. Though maybe the guy just needed enough money to boost his own character stats.