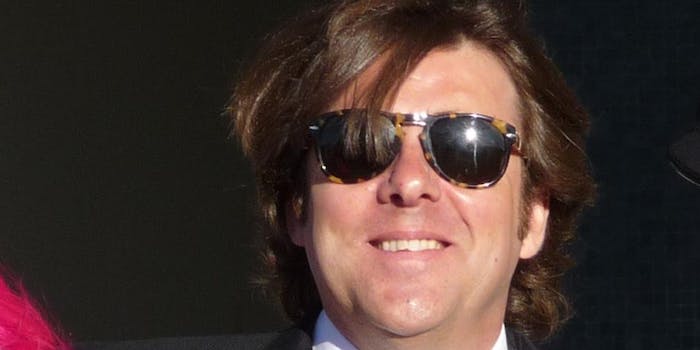 If your community is struggling with ways to be more inclusive and diverse, don't hire a host who once dry-humped a woman on national TV.

Note to convention planners: If your community has been struggling with ways to make members feel more comfortable, you might not want to invite a host who once dry-humped a woman on national TV.

British talk show host Jonathan Ross has withdrawn as presenter of the Hugo Awards after sci-fi fans reacted to the news of his hosting with outrage earlier today.

Ross is a controversial and polarizing public figure with a long trail of arguably sexist, racist, and ableist remarks. Allegations of his lewd treatment of women include  dry-humping performer Nicole Scherzinger, objectifying Nicole Kidman, and “publicly offend[ing] and humiliat[ing]” Georgina Baillie in a series of highly controversial prank calls with Russell Brand.

But more controversy is something sci-fi fans can ill afford at the moment. Among the most prestigious awards in genre publishing, the Hugos are also a product of a culture that has increasingly resisted pressure to become more diverse and inclusive to women and minorities. Just when sci-fi fans thought things were looking up, acclaimed writer and academic Farah Mendlesohn announced her resignation from the LonCon Committee earlier today over the Chairs’ decision to ask Ross to host:

“I spent all of this week arguing with the Chairs. It was made clear to me that this was not for the Committee to decide. It was further made clear to me, as the conversation progressed, that the Chairs knew in advance that I would be unhappy, and that one of the Chairs was not even prepared to discuss the issues of Jonathan Ross’s public abuse of women (that issue specifically: that Chair was prepared to discuss and excuse other issues).”

On Twitter, the sci-fi community immediately began voicing concerns about Ross and the decision to invite him. Given the context of this year’s Hugos, it seemed many, including prominent community members, read Ross’s invitation as a flaunting of the community’s call for change and inclusion. Some also saw it as a slap in the face to the Worldcon members who voted on LonCon as the host for the Hugos because they thought it would be an advocate for change:

All I’ve heard for a year is “But Loncon will be different!” And then the chairs take this sort of massive shit on everything. Well, ok.

No! How can the Worldcon chairs be so oblivious when the SF world has literally had *years* of dustups over exactly these issues? @effjayem

Worldcon guests and the Hugo Awards are two of the SF community’s most prominent statements about who we are and what we value. @effjayem

So congrats, @loncon3. When people asked for a change in Hugo hosts, meaning something that wasn’t more White Dude parade…

…you got a man who says things about women like me that I won’t put on my twitter. I am actually crying, @loncon3.

Fans also criticized the LonCon chairs for allegedly violating its code of conduct before the con even starts:

@loncon3 “Discrimination or prejudiced behaviour … is not tolerated.” Loncon 3 Code of Conduct

it’s very good of the @loncon chairs to let female and minority con members know how seriously the chairs take the code of conduct.

Ross promptly snapped back, calling his critics “small-minded” and noting that he has “already offered to withdraw.”

@wasteofpaint absurd. I’ll happily buy the ticket off you and give it someone less stupid.

The Hugos are something of a popular vote. To cast a vote for a nominee, you must pay for a membership to LonCon or another upcoming WorldCon convention host. If the convention allows for membership refunds, the backlasah could have created havoc for the process of collecting votes before the awards ceremony.

And what of the nominees themselves?

@rosefox And what would the Hugos lose if none of the nominees showed up? @pnkrokhockeymom @seananmcguire

There’s also the question of accountability. Satirically known as “SMOFS”—Secret Masters of Fandom—convention organizers have increasingly come into conflict with their expanding online community of fans. In 2012, Readercon’s entire board resigned over controversy about how it was implementing its own harassment policy. Last year, the World Fantasy Con came under fire for the prevalence of panels featuring only or mostly men.

Until the morning’s announcement, LonCon had received praise for its commitment to diversity, which include a harassment policy as part of its code of conduct and partnership with the advocacy group Con or Bust to bring minority sci-fi fans to the con.

“We were squeaky clean til this happened,” Mendlesohn said on Twitter. “It’s why I’m so devastated.”

Ross apparently wanted to make an early exit after seeing the backlash on Twitter. After spending the day arguing with detractors, he withdrew as host on Twitter:

@wossy We accept your resignation, with regret.

Members of the sci-fi community promptly criticized the tone of LonCon’s “regretful” announcement.

If I were @loncon3 I’d regret inviting Jonathan Ross at all, but instead they regret that he’s withdrawing. Seems like a clear statement.

The obvious question for the community now is who they will get to replace Ross. Asking a prominent progressive voice within the community would be an obvious choice to repair the damage. Notable voices include Seanan McGuire, who has volunteered to host in the past.

Regardless of who is chosen to replace Ross, the fact that he was invited at all seems to be indicative of the community’s ongoing and deep-seeded tension over how to make women and minorities feel more welcome, both within the industry and real-life spaces. It’s a conversation that will doubtless be ongoing, long after the sting of Ross’s invitation has faded.