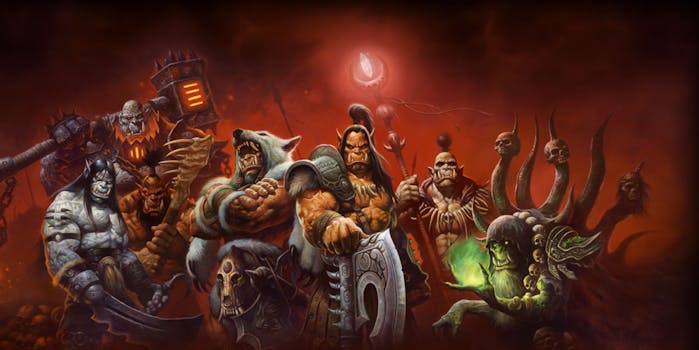 This weekend, the head moderator of the World of Warcraft subreddit became so irate that he couldn’t login to game’s busy servers that he blacked out the forum in protest, shutting out 200,000 fans.

Many of those fans, of course, had been plagued by similar problems following Blizzard’s problematic release of the much-anticipated Warlords of Draenor expansion. But they didn’t take kindly to the community’s page being leveraged by one person in a fit of petulance. The ensuing chaos saw the subreddit embroiled in a power struggle, a display of high drama that, at the very least, was more entertaining than what was happening on the World of Warcraft servers.

The problems with the Warlords of Draenor expansion have been well documented. Players have experienced incredibly long queue times as they try to login, as well as server crashes and unstable playing conditions due to congestion. While the game still boasted 7.4 million active players as of October, it seems that the number of returning and new players have caught Blizzard off guard. As the Senior Community Representative Josh “Lore” Allen put it on Twitter:

We obviously expected an increase in logins, and prepared for well above what we were expecting. The actual amount is far above even that.

Despite Blizzard moving as quickly as it could to fix these issues, the incredibly long queue times didn’t go away. One of those afflicted just so happened to be the head moderator of the World of Warcraft subreddit, who goes by the alias “nitesmoke.”

Rapidly losing patience with Blizzard, nitesmoke let the community know he and the other mods we’re becoming exhausted dealing with the surge in frustration at Blizzard:

“After 48 hours and still not being able to play, we feel your pain. My mods have spent the whole time removing shitposts and the same screenshots over and again and they are getting burned out. We expect this sort of thing for a day or so whenever Blizzard has issues, but this is going on for too long and we have other shit to do besides babysit the new section all day. We don’t get paid for this, remember. We’re 100 percent volunteers.

“From this moment forward, post whatever you want within our normal rules. I am calling the other mods off and giving them a break. Post your experiences, if it clogs up the sub and turns everything into a mess, so be it.”

All things considered this didn’t seem an unreasonable response. However, after another attempt later that day to login to the game he posted the following on Twitter:

“After over 8 hours in queue, my server goes offline. I give up.”

He followed this with a threat: As long as he couldn’t login, he would set the subreddit to private, a move that would mean the more than 200,000 subscribers (or anyone else) would be locked out. This threat was quickly actioned following some heated Twitter exchanges from users who, putting it generously, stated he was behaving in a childish manner.

Why shut the forum down? “He did this solely because it hurts Blizzard,” one regular on the forum suggested to the Daily Dot. “It’s one of the few ways this community can force Blizzard’s hand against this issue and get some results.”

If that was the thinking it backfired spectacularly. A few hours later, a moderator with the same level of clearance set the page back to normal and made a now deleted apology post explaining it wouldn’t happen again. Blizzard staff also took note, with Community Manager John “Zarhym Deadeye” Brown tweeting:

@nitesmoke I’ve always appreciated what you’ve done, but r/WoW shouldn’t be a hostage. It should always be there for the community.

Meanwhile, disgruntled Reddit users took to Twitter and, after searching nitesmoke’s history, managed to find his OKCupid online dating profile. That profile was, in turn, promptly posted many times to the forums. While this did constitute a breach of Reddit’s rules on releasing personal information, nitesmoke’s later claims that he’d been “doxxed” rang a little false, since he was the one who’d post the OKCupid link in the first place.

His authority undermined, nitesmoke went one step further. He began to remove the other moderators from the page until he was solely in control. Then he set it to private again with no chance of anyone being able to undo his actions. As more abuse rained down, and perhaps out of fear that more of his personal information would be unearthed, he deleted his Twitter profile.

Enter the hero of the story, a former moderator “aphoenix” who wanted to resolve the situation and bring stability back to the subreddit. Typically Reddit staff will allow moderators to run their forums any way they see fit. However, in cases when a forum has become inactive or a moderator has gone crazy with power, requests can be made to take over through the “RedditRequests” page.

Aphoenix made the request about an hour after it was clear there was no other option. Within two hours the post became the all-time highest upvoted submission on the subreddit. Reddit staff dealt with the situation promptly and normal service resumed.

Much like the end to a Warcraft storyline, the newly installed leader promised a golden age, stating in his first post to the users:

“First and foremost, I apologize for what has gone before. So, /r/wow was gone for a bit. Now it’s back. Service has been restored for many of the people who were previously have a service interruption. For that, we are grateful!”

While he didn’t agree with nitesmoke actions, he added, he at least understood the reasoning behind it.

“Blizzard was having issues allowing people to play the game that they have payed to play. As a form of consumer advocacy and protest, the subreddit was taken offline as a way to send a message to Blizzard that this wasn’t acceptable. The idea is simple: if one has no faith in a product, one of the simplest ways to show that is via protest. Protest is most useful if it has some kind of financial context to it. Being that we typically log a million hits per day, /r/wow has a significant claim as a fan website. ‘Going dark’ in protest has worked for a variety of other protests, and it could work for this as well.”

Users on highly populated servers are still experiencing login problems. Blizzard have acknowledged the issues and are still working to resolve them. At least now the biggest World of Warcraft subreddit has been restored.

We are still unsure if nitesmoke has managed to login.