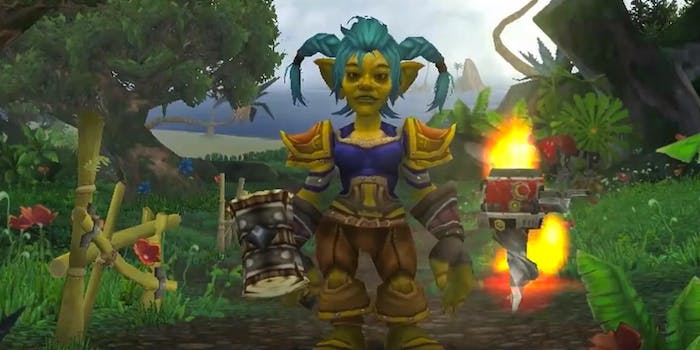 How a grandmother used World of Warcraft to cope with cancer

Comedian Andie Bolt wants to tell a very personal story about the power of gaming.

Gaming hasn’t exactly been portrayed in the most positive way to the outside world lately, thanks to Gamergate. But one look at a proposed documentary called WoW MoM might restore your faith in the power of video games and the gaming community.

Comedian and actress Andie Bolt is trying to fund the film on Kickstarter and wants to show how gaming can therapeutic by focusing on the story of her mother, Terry Bolt. Terry was diagnosed in 2010 with neuroendocrine tumors, known as NET. She was introduced to World of Warcraft (WoW) by Andie’s aunt who started playing the game after losing her husband. Terry explains in the Kickstarter video that the first time she saw Warcraft on her computer she was amazed.

“I couldn’t believe that world—that fantastical world that was there that I could be a part of,” she said.

Seeing her mother playing WoW, Andie looked into gaming as a therapeutic tool and discovered more gamers using it this way. She decided she could tell a bigger story about this aspect of gaming instead of just doing one video about her mom.

Now after shooting for more than a year and visiting BlizzCon, Andie needs to raise money to create the first cut of the film. She hopes it will not only show the positive effect of games, but also spread awareness of NET. The film will include other games and illnesses, but Terry’s story will be at its heart.

To gather support for the documentary, Andie is encouraging people to come together like a guild and join her on this “quest.” People can spread the word and share their own stories on Twitter by using the hashtag #AcceptThisQuest.

I #AcceptThisQuest because without WoW, I would not be the same person. It helped me cope with getting a chronic illness.

The Kickstarter comment section is also full of people sharing their own experiences with the gaming community.

“My youngest daughter introduced me to WoW at a very low point in my life…The gaming community gave me the emotional and social support I needed to get through a pretty rocky period,” Lynda Key wrote.

After the film is sold, the Kickstarter page states that 5 percent of the revenue will be donated to NET cancer research. So far, $19,300 of the $45,000 goal has been raised. The campaign ends Dec. 12.