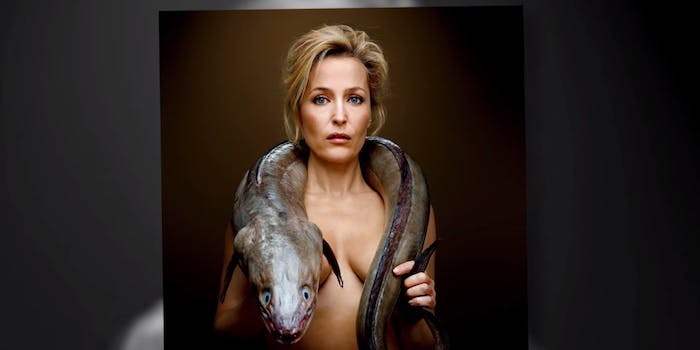 It's for a good cause.

Would you pose naked with sea life to raise awareness? I did: http://t.co/YsUxQsqd33 #worldoceansday pic.twitter.com/LaMx82c37C

This attention-grabbing tweet is, fittingly, part of an awareness-raising campaign called Fishlove. The campaign aims to highlight the dearth of sustainable fishing practices in the world’s ocean. Today’s photo release is one of many events happening in honor of World Oceans Day.

It’s hard to put numbers on overfishing as a whole considering each species of animal fished has its own marketplace and life cycle that can be disrupted by overfishing. But one study said that large ocean fish such as Chilean sea bass and Bluefin tuna are now just 10 percent of their original population, entirely due to overfishing. This tends to be because large fish species are slow to mature, and many of them are caught before they reach sexual maturity. When most of the fish on our plates never had the chance to reproduce, their numbers drop fast and the populations can collapse easily.

Few policies effectively curtail overfishing. Fishing sites exist beyond the reach of most government agencies. The economic incentives lie with catching more fish and it’s difficult for oversight agencies to keep track of how many fish are being caught each day. Fishing practices are also relatively crude, where most yields produce bycatch—sea life caught up in nets that aren’t the intended target. By the time the bycatch animals are returned to the ocean, they’re usually already dead.

But it’s not only overfishing that is driving ocean life to extinction. As this press release says, increased carbon dioxide in the atmosphere from global warming threatens fish as well. When carbon dioxide builds up in the atmosphere, it dissolves into the oceans, making them more acidic. Sea life is very sensitive to acidity and can easily die if the waters are too acidic or too alkaline.

The idea behind Fishlove is to call attention to these problems. If photos of fish won’t do it, perhaps the naked celebrities will.