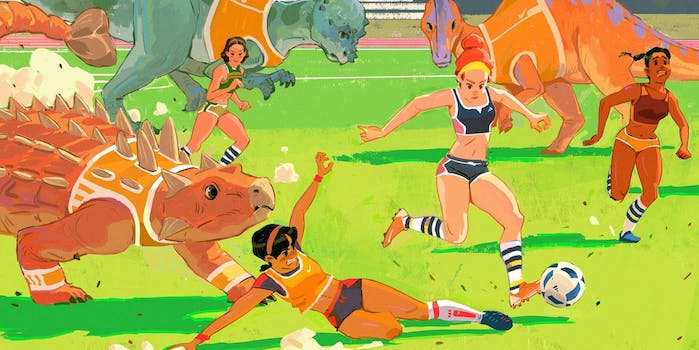 Dinosaurs compete in human sports in these beautiful fantasy illustrations

This is the perfect fantasy art for summertime.

Combining a unique idea with a bright, pastel-hued color palette (not to mention some topical subject-matter during the Olympics), it’s easy to see why Jung’s dinosaur sports art blew up on Tumblr this summer. Each painting shows dinosaurs participating in a different sport, and all of them are a perfect balance between adorable, imaginative, and dynamic.

Jung trained at the Art Center College of Design before being hired as an artist for Dreamworks Animation. His dinosaur series was inspired by a drawing he did back in high school, showing a ninja riding a dinosaur.

Dinosaurs are obviously a popular topic for fantasy artists, and Jung’s art adds a modern twist to the whimsicality of something like Dinotopia. In an email to the Daily Dot, he explained that he enjoys the visual contrast of matching the right kind of dinosaur to each human sport. “For example, I drew a running track scene with triceratops because they seems very stiff and almost too massive to run. I hope this would create a witty situation.”

“Each sport has different character,” Jung says. “There are sports that deal with speed, height, accuracy, equipments and so on.” These elements determine which dinosaurs he uses, which is how you end up with amazing images like a pair of brachiosauruses holding up a pole vault bar.

You can find Woonyoung Jung’s art on Tumblr and Instagram, where he continues to post new work every week or so.