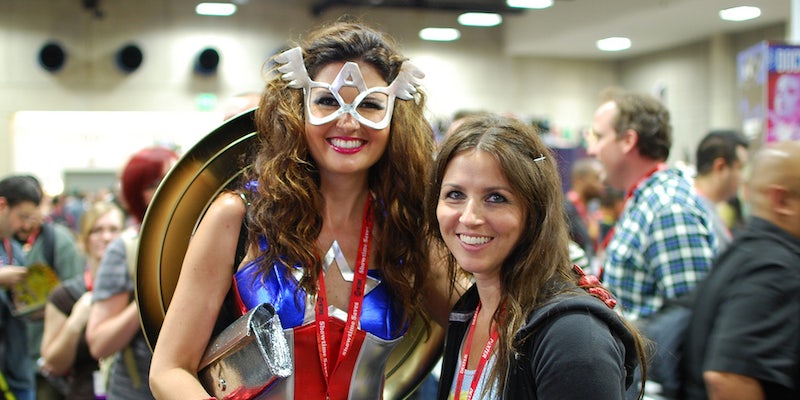 When write off entire subcultures for “ruining” fandom for everyone else, then the only Bad Fan is you.

“I like fangirls how I like my coffee. I hate coffee.” Three days after being spotted on a T-shrt for sale at WonderCon, this idiotic slogan is still making waves in the geek community.

Why? Well, for one thing, it seems like a perfect example of the hostile environment many women have to deal with when they attend fan conventions. However, the T-shirt’s manufacturer, Tankhead Custom Tees, has just come forward to explain why the shirt isn’t sexist. First of all, they’re careful to point out that they also produce a “fanboy” variant. “Apparently it’s only sexism if it is insulting to one gender,” Tankhead posted on Facebook, along with a photo of the shirt. 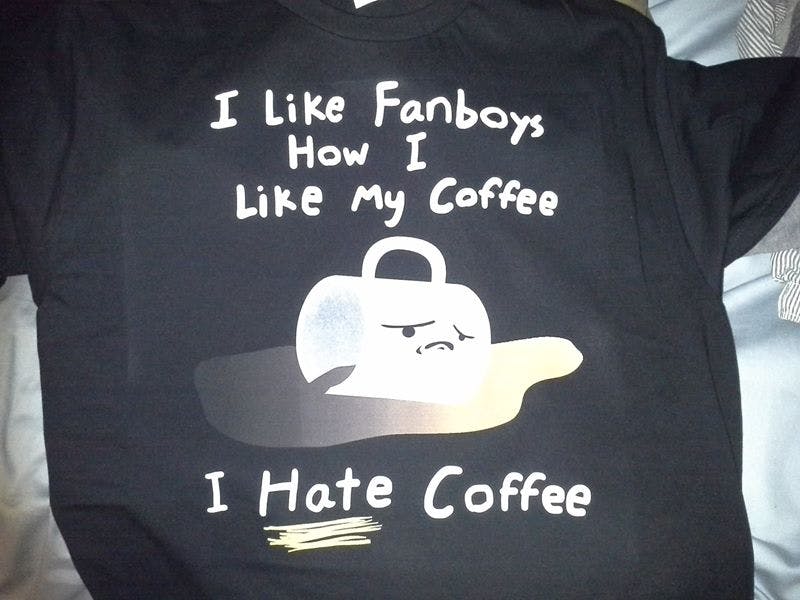 “Anyways, the fangirl/fanboy shirts can best be explained like this: fangirls/boys =/= fans. Fans are people who like and genuinely respect a fandom, and it’s creators. Fangirls/boys are like those creepy fedora wearing neckbearded bronies, or hetalia fanfiction shippers, who make us all collectively cringe in pain at what they do to the things we love.

No one should ever defend these kinds of people. Seriously, they make the rest of us look bad.”

So, just to be clear here, the shirt isn’t insulting toward all women, just the ones who are the wrong kind of fan. And that’s totally not a gendered insult because bronies (i.e. male fans of a media source that’s traditionally aimed at girls) are repulsive as well. Right?

This is a textbook example of the “fake geek girl” phenomenon, a concept that just will not die. One commenter even claims that “fangirl” isn’t a gendered term, because you can use it to insult men as well—as if it’s not sexist at all to use “girl” as an insult when making fun of a dude.

The idea that it’s OK to be disgusted by certain types of fan is pretty widespread in the geek culture community, and it’s ridiculous to suggest that this habit isn’t connected to sexist prejudice. In the nonsensical social strata of geekdom, “serious” sci-fi literature fans are somewhere at the top, Trekkies and comic book nerds are somewhere around the middle, and anything women are interested in is invariably right down at the bottom. Popular examples: Supernatural, YA novels with female protagonists, fanfiction, shoujo anime, and pretty much anything that’s popular on Tumblr.

It’s no coincidence that “fangirl” is a name that’s most commonly used to describe the women and girls who read and write fanfiction. By the logic of people who use fangirl as a pejorative term, fans who spend hours reading and collecting superhero comics are at the cool, respectable end of the geek scale, while “fangirls”  who write tens of thousands of words of superhero fanfic are embarrassing weirdos. In other words, if you conform to the old-fashioned, male-dominated form of fandom then you’re fine, but if you prefer to join the subculture that was primarily founded on the work of female fans, then it’s acceptable to publicly mock you at an event like WonderCon—a place where people go to geek out and spend time with like-minded fans.

Obviously, this Mean Girls-esque view of the fandom community is total nonsense. Writing Hetalia fanfic is no more or less frivolous and embarrassing than learning to speak Klingon or playing D&D or waiting in line for six hours to get into the Marvel panel at Comic Con. When you start writing off entire subcultures for “ruining” fandom for everyone else, then the only person being a Bad Fan is you.

The vast majority of fanfic fans are perfectly happy to remain in their own online spaces and let everyone else do their own thing. Their appearances at conventions are no more ruinous or disgraceful than anyone elses. The same goes for the female cosplayers who regularly get harassed at fan events, and the male My Little Pony fans who wind up getting bullied at school for liking something that doesn’t conform with expectations of what boys are meant to enjoy.

Tankhead’s “I like fangirls/fanboys how I like my coffee” t-shirts are a pretty obvious case of trolling, particularly since the manufacturer posted a comment to Facebook to say that for free speech reasons (“we don’t give a shit about political correctness and not offending people”), they’d be happy to print equivalent “I like Gays/Black/Mexicans/Muslims…” shirts as well. The entire market for this type of product is reliant on people feeling defensive and angry enough to pay for a T-shirt that declares how defensive and angry they are.

Basically, the people who are actually ruining the fan/convention experience for everyone else aren’t “fangirls,” but the kind of people who would buy those t-shirts in the first place. The gatekeepers, the elitists, the guys who make female illustrators feel unsafe and uncomfortable in comic shops. The people who assume that half the women at fan conventions are Fake Geek Girls who are just there to invade male geek spaces for funsies, seducing and destroying pure-hearted fanboys with their intricately constructed Catwoman cosplay outfits.

It’s time to stop using fangirl as an insult. Even if you’re using it with the dubious intention of only meaning certain kinds of “bad” fangirl, it’s not going to be interpreted that way. If you go to a convention wearing a T-shirt that proclaims that you hate fangirls, chances are that every single woman in the room is going to assume that you’re talking about her, regardless of how she identifies herself. And that puts you firmly in the one subcategory of convention attendees who are hated by everyone: assholes.