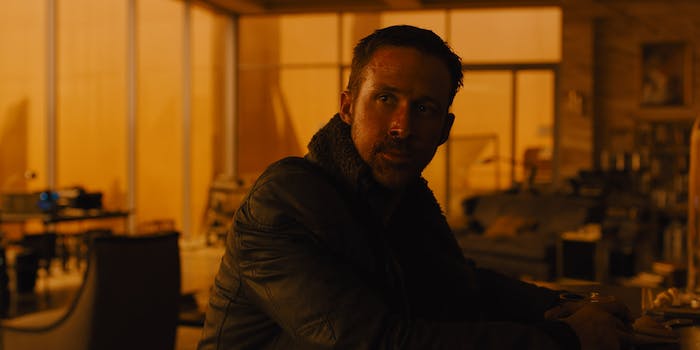 Blade Runner 2049 is a box office flop, partly because women aren’t interested in watching it.

The film earned a disappointing $31.5 million in the U.S. this weekend, well below expectations. Its original production budget was around $150 million, plus advertising expenses.

Jeff Goldstein, the Warner Bros. president of domestic distribution, said he was “disappointed” at Blade Runner 2049‘s box office haul. Speaking to the New York Times, he explained, “The real trick now is to expand the audience past older men.” Seventy-one percent of the opening weekend audience was men. That’s a pretty drastic gender split, even by the standards of male-dominated sci-fi movies. According to Warner Bros. estimates, even Batman v Superman‘s audience was just 62 percent men.

The original Blade Runner isn’t really perceived as a “guy thing” any more than any other sci-fi movie, but 2049‘s marketing may have put women off the sequel. Ryan Gosling and Harrison Ford received more attention than the film’s female lead Ana de Armas, a little-known actress who plays Gosling’s sexbot hologram girlfriend. It’s also possible that word of mouth got around. While 2049 was praised for its visual effects and direction, some critics found it to be surprisingly sexist.

2049 reportedly also did poorly among younger viewers, which could indicate a miscalculation from the studio. The original Blade Runner is iconic, but it was never a mainstream blockbuster like Star Wars or Terminator. It was a sleeper hit with a downbeat ending, and while 2049 may see similar success over a long period of time, it might not be realistic to expect a superhero franchise-sized opening weekend.