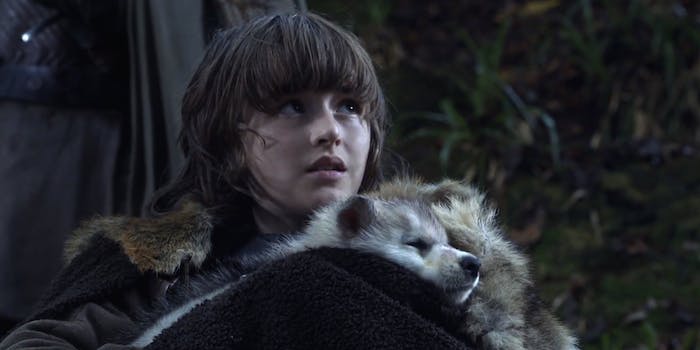 Direwolves aren't good house pets—and neither are the wolfdogs that look like them.

A U.K.-based charity is warning people not to purchase or adopt wolfdogs that look like the direwolves that appear on Game of Thrones.

Artisan Rare Breeds has already rescued nine wolfdogs from homes recently. Wolfdogs are a cross between wolves and “shephard-type dogs.” The animals rescued by the group so far have all been Czechoslovakian wolfdogs bred by the Czech military. Unlike other dogs that may be rescued from homes, wolfdogs will never be placed in another home. Many require owners to have a Dangerous Animals license.

(Less serious, but still problematic, is the more recent slate of husky-type dogs being abandoned by owners who don’t realize they need lots of exercise and regular grooming. One San Francisco Bay Area shelter suspects Game of Thrones has contributed to its husky boom.)

Director Wayne May suspects that people have been adopting these dogs because they look like the direwolves on Game of Thrones. Purchasing a third-generation wolfdog is legal in the U.K., but he estimates that the wolfdogs he rescues might be up to 50 percent wolf.

“To have these animals as family pets is really irresponsible,” he told The Telegraph. “Some of the ones we’ve rescued I reckon have more wolf in them than dog, which is illegal. I know they’re seen on telly in Game of Thrones, but people need to realise that these are basically wild animals and need to be treated with respect.”

These wolfdogs are often difficult to take care of. They eat raw meat and chicken because dog food upsets their stomachs.

While people buy them as pups, May says they find that they’re unable to cope with them when they get older, citing one example where a wolfdog caused £4,000 in damage after it was left alone with two chihuahuas for a couple hours.

Although cute in appearance, the direwolves on the show are difficult to raise, even in the fictional universe. Initially, Eddard Stark wanted to kill the direwolf pups, but he was persuaded by Jon Snow to let the Stark children take care of them on their own. Loyal to the Starks, they may seem like docile pets until someone tries to harm their owners. After the first season, Game of Thrones relied on CGI to show the direwolves on TV.

Sophie Turner, whose character Sansa was the first to lose her direwolf on the show, ended up adopting the dog who played Lady. That dog was a Northern Inuit.

May hopes that there is more restriction on breeding and selling wolfdogs, saying that “looks can be deceiving.”