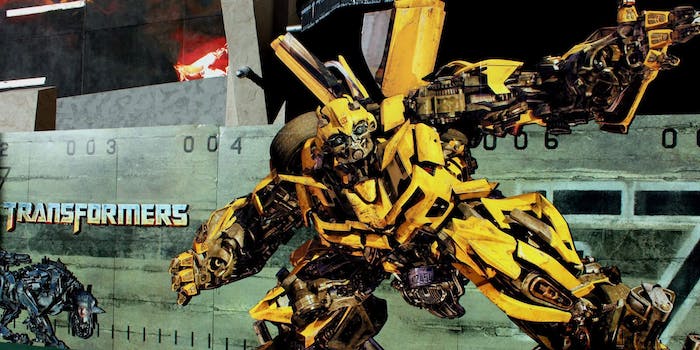 Given the reviews of Transformers 4, you might be better off sticking with this robot.

If you’ve ever wondered what Michael Bay’s Transformers franchise would look like if it were produced with a budget of only a few thousand dollars and no Chevrolet sponsorship, George Edgren has the answer.

People hot on the release of Transformers: Age of Extinction are flocking to see a 23-foot-high Transformer he constructed from a junky Oldsmobile Alero. The small town Wisconsin man and owner of Edgren Bilt Yard Art says the figure took a month to construct. Edgren spoke to WBAY news about the project:

A friend of mine from work brought it up. He said you should build a Transformer. I’m like, I don’t think so. It doesn’t really seem to strike my fancy. Then two to three weeks later, had the junk car, had a bunch of angle iron, bolt it to the concrete and started from the ground up.

Looming two stories tall above Edgren’s home, the figure is currently nameless. While some visitors think the robot looks like the series favorite Bumblebee or even the Iron Giant, Edgren is open to name options, soliciting them through his Facebook page.

Given the scathing critical reviews of the latest franchise installment, you might be better off taking a trip to see the reconstructed Alero than Bay’s behemoth.