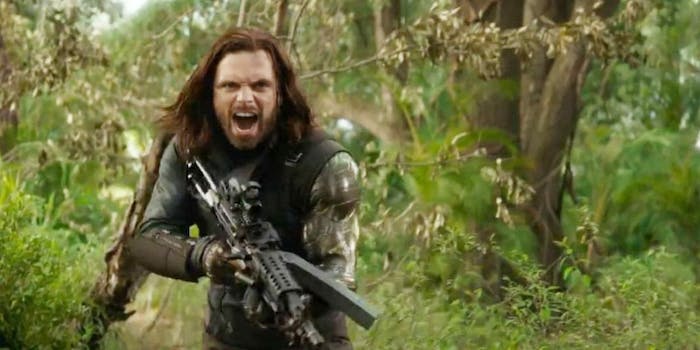 The Winter Soldier arc is coming to a close.

With literally dozens of main characters, there’s some concern that Infinity War and Avengers 4 won’t have time to wrap up all those loose ends. But according to a new interview with directors Joe and Anthony Russo, fans of Steve Rogers and Bucky Barnes shouldn’t be too worried. Without revealing any details, they say that Avengers 4 will “complete the personal journey” of Captain America: The Winter Soldier.

This is welcome news after Civil War, whose ensemble cast required more screentime than the emotional arc from the first two Captain America movies. It sounds like closure may finally arrive in the fourth Avengers movie, following Bucky’s offscreen recovery in Wakanda. These comments also suggest that Steve and Bucky both survive Infinity War—although we’ll be astonished if Captain America doesn’t get a heroic death in Avengers 4.

“For us, this was the challenge of telling the story but also completing the personal journey that we started as storytellers in Winter Soldier. So the story that began in Winter Soldier and that ends in Avengers 4… there’s a very personal arc there for us. I think you’ll understand our point of view as filmmakers and who we are as people when you watch all four of those movies together.”

Anthony Russo called back to the positive reception for Winter Soldier in 2014, emphasizing their connection to the film’s emotional arc: “We knew what we loved about the character.”

Given that Winter Soldier was the Russo Brothers’ breakout movie after a decade of directing sitcoms like Arrested Development, it makes sense that they’re attached to these characters. They’re also well aware that Steve and Bucky share one of the most popular arcs in the franchise, so it’s reassuring to know we’ll get closure before one or both characters bow out in Avengers 4.