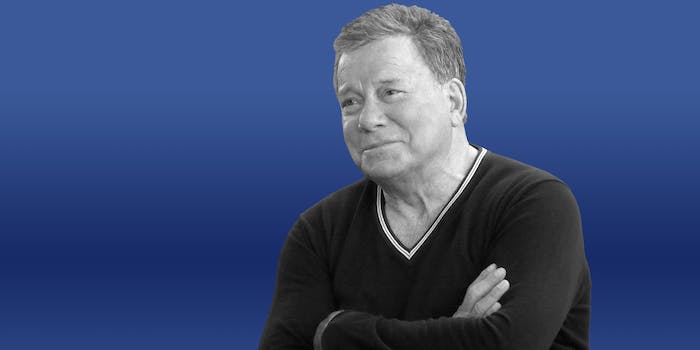 It turns out the celebrity-only Facebook app isn't anything special.

William Shatner is on Tumblr now, and he’s taking his role as Internet Grandpa very seriously.

Considering the fact that Tumblr has no instruction manual and is notoriously hard to figure out, Shatner is doing pretty well. He’s already worked out the most important step of Tumblr communication, anyway: Don’t switch on your askbox unless you’re certain you want a ton of stupid messages from strangers.

So my plan for the @Tumblr blog is to talk about my adventures online where I can express myself in more than 140 characters.

So if I turn on /ask on @tumblr will I regret it?

Wow so I say the /ask is on and folks are tweeting questions. Ask is on Tumblr

It’s like every other place everyone jockeying up to get noticed.

Shatner’s first proper Tumblr post is a review of Facebook’s Mentions app, which is only accessible to famous people with verified Facebook profiles. This public review kind of defeats the purpose of the elite, members-only atmosphere of Facebook Mentions—particularly because Shatner concludes that Mentions is no better than the normal Facebook apps that are already available to the rest of us peasants.

It seems that Mentions isn’t really the exclusive, cool version of Facebook it’s touted to be—it’s just slightly different from the other apps, according to Shatner, but not necessarily better. To begin using it, you have to start following another celebrity, which Shatner found annoying because it told him to follow George Takei, with whom he shares an ongoing feud.

He goes through various different features on Mentions, concluding, “I’m not quite sure why Facebook released this app for ‘celebrities.’ It seems to be ill conceived. I will probably use it to post to my Facebook when I’m on my phone but it doesn’t allow for mail or groups. I will continue to use my regular Facebook App as well as the Pages app.”

Honestly, this is pretty great use of Tumblr. At 83 years old, it would be a little weird if William Shatner started participating in Tumblr’s fast-moving, teen-dominated meme culture. Instead, he’s doing something more interesting: Giving us an insight into something only he can tell us about.

Most celebrities on Facebook Mentions will be presumably using it because they enjoy the elite feeling of being surrounded by verified peers, but Shatner reveals that it’s just as lame as an other social media app on the market.