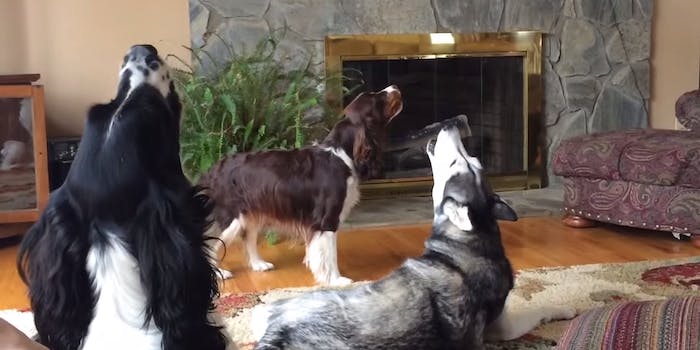 The science behind why dogs howl

This video of three dogs howling in a living room is equal parts cute, funny, and annoying.

It all begins when an English springer spaniel starts barking. Next, a husky joins in with a howl. In a matter of seconds, the first dog transitions from barking to howling and a second spaniel starts howling, too. They continue for almost a full minute until their owner finally decides he’s had enough.

But what’s going on here? Why do all the dogs start howling for no apparent reason? To understand that, we have to look at the dog’s closest wild relative, the wolf.

Clive Wynne is a professor of psychology at Arizona State University who specializes in wolf behavior. The Daily Dot contacted him to see if he could shed some light on this video.

Wolves howl as their primary method of communication, Wynne told us. “[A howl’s] high pitch and its tonal quality carries well,” he said, so it works as sort of a long-distance call to other wolves. “They howl in unison because that’s how they can hear each other.”

“So then, from a scientific point of view, why have dogs largely given up on howling?” Wynne asked.

Dogs don’t have a need for long-distance communication with other dogs since they’re usually confined to small areas like a house or a yard. But they still harbor an instinct to howl. Wynne said that huskies may be especially wont to howl, because they’re more closely related to wolves than other breeds.

But a note of caution: Dogs also howl when anxious or nervous, according to veterinary behavior specialist, Dr. Melissa Bain at the University of California, Davis. If a pet dog is howling, it is important to make sure it’s not due to anxiety.

So let’s get back to the video. The husky starts howling, likely because the first spaniel starts barking, and then they all start howling.

“Once a dog starts howling it’s kind of like yawning. It’s sort of infectious,” Wynne said. “The other dogs join in even though they probably couldn’t tell you why.”

There you have it! They’re probably howling just to howl.

In fact, it’s pretty easy to get a dog to howl. Just ask Mishka, the talking husky.

In this video, Mishka appears to be saying, “I love you.” Though in reality it’s more of an “I-roo-roo.” Wynne says that’s a pretty easy sound to make for a dog, and the human mind probably fills in the rest. Chances are, Mishka said “I-roo-roo” because “I love you,” especially when cooed in a sing-song voice, sounds a little like a howl. Then when her owners praised her for it, it became just like any other dog trick.

Wynne said his favorite “party trick” is to walk up to the fence of the wolf enclosure where he works and make a howling sound. The wolves howl back but the secret is that you don’t even need to be good at howling. Just ask this ridiculously adorable puppy: