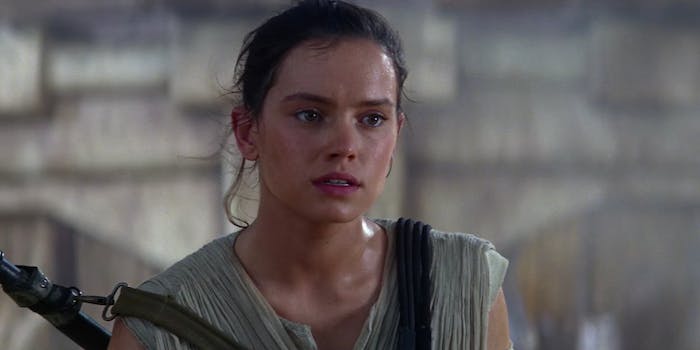 Rey, the hero of Star Wars: The Force Awakens, has been a huge part of the Star Wars merchandising push for months now, but she’s still not immune to being left off of merchandise.

The latest infraction comes from a Star Wars Monopoly set from Hasbro. Instead of the usual eight player pieces that come with most Monopoly sets, this one comes with four: Finn, Kylo Ren, Luke Skywalker, and Darth Vader.

Although the set has been available since September, some fans are just starting to notice that the game set is missing the film’s most important character.

How can games companies keep getting away with releasing TFA sets without Rey? She's literally the main character. #WheresRey

For the growing group of frustrated fans who curse the lack of toys featuring female characters, it’s nothing new. They experienced it for decades with Leia toys and even modern cases of erasure. Black Widow got the same treatment and is often not included on merchandise featuring all of the Avengers; Clark Gregg and Mark Ruffalo have even publicly called out the problem. It’s even happened to Gamora, a key member of the Guardians of the Galaxy team.

With the release of The Force Awakens merchandise, it seemed that Disney might’ve finally noticed the discontent. Rey merchandise is hard to find in some places, but that’s because it’s often sold out, not because it doesn’t exist. Disney and Lucasfilm have made it a huge point to market Star Wars for girls and women this time around.

Director J.J. Abrams even spoke of his hope that girls could see themselves in characters like Rey and Captain Phasma after clarifying his original remarks about how Star Wars was “always a boy’s thing,” which received pushback from other Star Wars fans.

Because I was stupid and exhausted. I meant to say that so many have perceived SW as a boys' club & it ain't. (1/2) https://t.co/6YytJd5Mqt

(2/2) Never has been — and I hope girls and women see themselves in Rey (and not Phasma)!

But the Monopoly set isn’t the first time Rey has been erased from the merchandise.

Back in November, fans noticed that a Force Awakens Hasbro action figure six-pack did not include Rey or Phasma—both who were featured in promotional footage—but for some reason had a random stormtrooper and TIE fighter alongside Finn, Kylo, Chewbacca, and Poe Dameron.

Nearly a month later, fans discovered a Millennium Falcon battle set on Amazon that only came with Finn, Chewbacca, and BB-8. Like the six-pack and the Monopoly board, the set was manufactured by Hasbro.

According to Hasbro, Rey wasn’t included in the Star Wars Monopoly set in order to “avoid a revealing key plot line that she takes on Kylo Ren and joins the Rebel Alliance” while stressing the other Rey toys it had available.

We understand not wanting to spoil the big reveal that Rey is Force-sensitive and defeats Kylo at the end of the movie, but is that really the case here? Some fans are skeptical.

It is financially essential to you that Star Wars not intrude on projected audience for Barbie, Bratz, etc JUST COME OUT AND SAY IT, HASBRO.

but they put Kylo right next to Darth Vader in the promo pic? https://t.co/02EwwZ45bD

There’s been at least four different Star Wars Monopoly sets before the one tied to The Force Awakens was released, each of them containing eight pieces: the Original Trilogy Edition, the Classic Trilogy Edition, the 20th Anniversary Edition, and the Saga Edition. One of them doesn’t include Leia while there are two version that don’t have Han Solo or Chewbacca. The pieces vary, but the sets are largely similar: It’s the same square board game setup that we grew up with.

The new Star Wars Monopoly set instead divides characters by Rebel or Empire and has the players build bases and conquer planets throughout the game. If this were the original trilogy, that’d be fine. But it’s The Force Awakens. The Rebel Alliance and the Galactic Empire no longer exist, so how could Finn or Kylo Ren be part of it? (The Resistance and the First Order have similar goals as their predecessors, but it’s not the same thing.) Plus, Return of the Jedi-era Luke (indicated by the green lightsaber) and Vader aren’t even in The Force Awakens—and no, the mask doesn’t count. Getting rid of that part of the game could easily solve that problem—and allow other characters like Han Solo, Captain Phasma, Chewbacca, and BB-8 to be offered as pieces. Featuring Rey in her Jakku outfit would then spoil nothing.

When the set was released in September, we hadn’t seen footage of Rey flying the Millennium Falcon but we had seen her in it, courtesy of Vanity Fair’s cover shoot from May. Even from the two trailers we had seen at that point it wouldn’t have been too much of a guest that Rey was an ally of the good guys—even just from helping BB-8 and Finn on Jakku.

Some trading cards revealed Rey’s alliances back in September, and then there was that Duracell commercial featuring a girl dressed like Rey who exhibited Force abilities.

While Rey toys may be hard to find now, there will be more available soon, according to Disney.

“Rey and Phasma feature prominently across hundreds of products, and are selling exceptionally well,” Paul Southern, Disney’s Senior Vice President and Head of Licensing for Lucasfilm, told The Daily Beast in December. “In many stores and e-commerce destinations, products featuring Rey are selling as quickly as retailers can restock shelves. Fans will also be seeing a lot more of Rey with a new wave of product coming in January.”

It’s 2016, and Rogue One comes out at the end of this year. Like The Force Awakens, it has a female lead. With fans already carefully watching to make sure their favorite female characters get their share of merchandise, Disney and Hasbro can bet they’ll hear an uproar if Felicity Jones’s character is missing.

Update 8:33pm CT: Hasbro announced in a tweet that it will include Rey in a Monopoly set later this year.