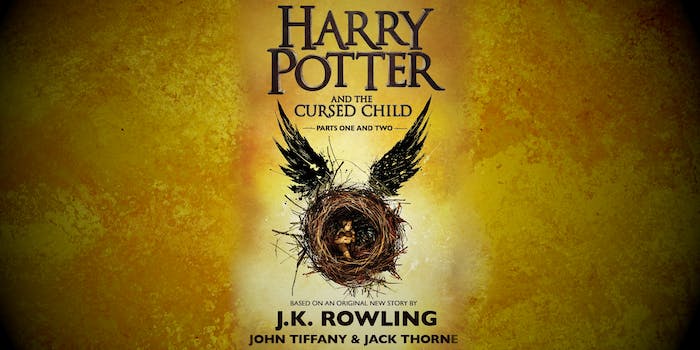 The magic of 2007 is descending here in 2016—and bookstores want you to relive it.

The release of the rehearsal script for stage play Harry Potter and the Cursed Child will soon be upon us, which means we’re about to get a kind of celebration many fans haven’t experienced in years: Bookstores and libraries across the U.S. will once again hold midnight release parties for a Harry Potter book.

For many of us, it’s a memorable and magical time. Harry Potter book releases were something to look forward to during the summer, a rare chance to enjoy bookstores’ and libraries’ versions of Butterbeer (long before the Wizarding World of Harry Potter started serving the official brew).

Harry Potter fandom isn’t dead—and in some spaces it’s still thriving and evolving—but the Cursed Child midnight parties mark the first time some fans will get to celebrate with the community in ages. By the time Cursed Child is available for purchase on July 31—Harry’s birthday—it will have been five years since the theatrical release of Deathly Hallows Part 2 and just over nine years since Deathly Hallows’s book release. In that time, much of the original HP generation has grown up while new fans discover the magic everyday.

A lot has changed since then, and it’s the kind of bustle and excitement some fans haven’t experienced in a nearly decade. People can see the stage version of The Cursed Child if they’re in London, Fantastic Beasts and Where to Find Them will be out in November and J.K. Rowling has already written the script to the sequel, and new updates on Harry’s world arrive on Pottermore frequently—including North American wizarding history and an entirely new wizarding school in the U.S. (Those updates also garnered criticism from critics and Native American activists.)

Come July 31, The Cursed Child will not only be available in print. You can also pre-order it in ebook form—the first major Harry Potter book to be released that way since Rowling finally allowed her series to be released digitally. The access will allow fans to have the books immediately without the wait or even go outside. (Or have someone spoil the play for them while they wait in line to purchase the book.)

But for those looking to rekindle that magic? Bookstores and libraries all over the country are hoping that old fans and new will come out to celebrate the new book with activities, treats, and games meant as they wait to pick up their own copy.

Here are just a few of the places offering midnight parties for Harry Potter fans.

As the largest major retail bookstore in the U.S., Barnes & Noble is throwing its pointed hat tip-first into the midnight party ring. It already had a kickoff event last month where fans could relive the series and enter to win a special edition of the seven Harry Potter books. The main event will include a Muggle Wall where people can share Harry Potter memories and sign up for giveaways. Plus, each store will announce the winners of the Harry Potter book sets.

The Austin, Texas-based independent bookstore will have plenty of activities for wizards and witches of all ages, pledging that everyone will “party like it’s 2007 again.” It’ll hold trivia and costume contests like some of the other stores on this list, but fans can also interact with a cast of characters, eat food from local vendors, and write poetry in the style of your Hogwarts house with help from the Typewriter Rodeo.

The second-largest bookstore chain in the U.S. has more than 250 stores in 32 states, and it’s kicking off its Harry Potter celebrations early on the 30th. Stores will host trivia contests, coloring stations, and scavenger hunts, but the main event is closer to midnight. You’ll get a goody bag just for attending, but you can also debut your best cosplay for a costume contest.

The release of Cursed Child falls right in the middle of GeekyCon, a fandom-centric convention that initially started as a Harry Potter convention, so GeekyCon is transfiguring its annual Saturday night tradition—the Esther Earl Rocking Charity Ball—into a giant book release party filled with costumes, Wizard Rock, sorting, games, and chances for fans to predict what they think will happen in Cursed Child.

The Massachusetts indie bookshop is welcoming fans of all ages to its midnight party, especially the Hogwarts classes of 1978 (the year Severus Snape, Lily Evans, and the Marauders all graduated) and 1998 (the year Harry, Ron, and Hermione were supposed to graduate if not for Voldemort’s takeover). Better yet, the premises for the night of fun is about 90 minutes from the location of American wizarding school Ilvermorney. A photo booth, finding Golden Snitches, wizarding snacks, Butterbeer, and a birthday cake for Harry, who’s turning 36 this year, are all part of the night’s activities.

The activities at Word Bookstores’s two storefronts are similar for the most part: They’ll include cake and other treats from Harry’s world, trivia, and prizes for those attending. However, the Brooklyn party in particular will offer alcoholic beverages for attendees 21 and over and a Butterbeer pong tournament.

Can’t find a bookstore or library near you?

Just go to Scholastic’s website and search by your zip code or city and state. If you’re hosting a public party and don’t see yours listed, you can fill out a form to add it.