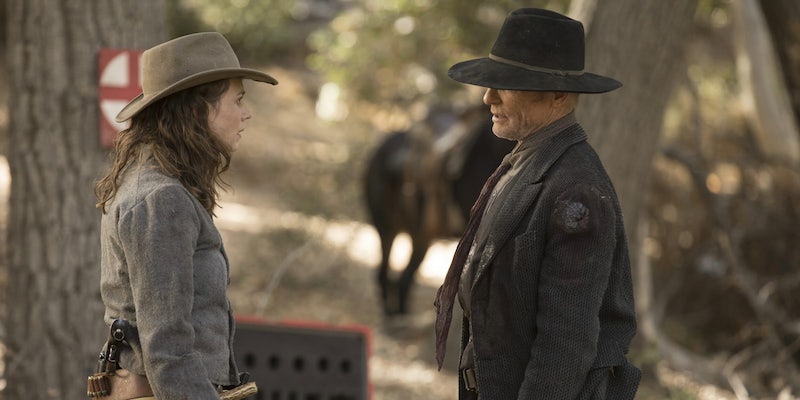 No, William isn’t a host on ‘Westworld’—here’s why

The idea that hosts could be hiding in plain sight on Westworld has been a lingering thread since the reveal that Bernard was a host modeled in Arnold’s image during season 1. But with the park in full revolt, the threat of those hidden hosts is bigger than ever—including someone we’ve known since the beginning.

At least, that’s one prevailing thought. Fans have had plenty of questions about just who William is within the park for much of the show, with suspicions rising in season 2 as a version of Ford from beyond the grave sent him on a new quest to find the Door. By the time he encounters his daughter Emily, he’s got some suspicions of his own. He initially sees his daughter as another host sent to taunt him by Ford—an especially twisted one, he notes—and won’t listen to her no matter how much she insists that she’s human. Just a few episodes later, he kills Emily and the men tasked with bringing him out of the park, believing that they’re all hosts out to get him.

But he’s losing his grip on reality, something that appeared to have started even sooner than his most recent trip. Fans are, of course, speculating: Is he secretly a host trying to wake up?

It’s far more likely that all of Williams’s tragedies and flaws are all strictly human.

Throughout the season, William is shown to have almost superhuman-like abilities. He might not be able to give commands on the fly like Maeve can, but he’s gotten further than almost anyone and survived more than most folks can in Westworld. And in “Vanishing Point,” he questions the nature of his reality on more than one occasion both in the real world and in Westworld itself. Juliette repeatedly asks if he’s real, noting that she can see right through him when nobody else can. He starts to see Dolores in the face of another woman—a possible nod to hosts’ memories getting mixed up.

He even hints at the possibility of being out of place in the real world.

“I don’t belong to you or this world,” he says to his wife Juliette. “I belong to another world. I always have.”

In a show where anything is suspect, this new development from William is cause for concern, as is his increasingly disturbing behavior. But it doesn’t prove much of anything.

For one, one of our first scenes with William disproves the theory. He’s shot by Teddy, which has no effect on him for two reasons: He’s a human and Teddy is a host. Even with Westworld’s many webs, William is the character we know the most about. We see him go from a more innocent young man (albeit with hints of darkness) to a paranoid and embittered veteran of the park. Much of his rise and fall is known to us and the people around him already. He even ages.

William, like many of the guests, discovers who he really is within the park’s borders. He’s free, more so than he is in the real world. His comment to Juliette could have easily been a nod to not feeling at home among his own.

Look at the profile

Toward the end of the episode, Juliette sees William’s “self-portrait” in the form of his Westworld profile card in a copy of Slaughterhouse-Five, a book about a protagonist named Billy who is stuck in time. On the card, she’s shown just how much of a monster her husband is and it states that he has a persecutory subtype, delusions, and a paranoid subtype.

In this episode alone, we’ve seen all three at play. Emily even calls him out on his view that everything in the park is meant for him. He’s convinced that everyone around him is a host controlled by Ford and takes it upon himself to execute them. He won’t listen to his own daughter and assumes that every gap in the story is a result of her own programming.

But making him a host who’s achieved a kind of digital immortality in a way that Jim Delos could not and having his ruthlessness and paranoia be part of a backstory makes it convenient and lazy storytelling. Making him a host would validate all of his paranoia. It’s much more fascinating to see William’s story play out as about how far a man can fall—and he’s pretty much gone past the point of no return—if it’s something of his own creation.

Theories that catch on don’t always make sense, but the breadcrumb of hope in the “William is a host” theory lays in the details: His delusion and paranoia are almost certainly leading him to come to the same conclusion as some fans.

He knows that before Dolores’ revolution, he couldn’t be killed by bullets. He was cleared after being scanned for a “restraint ordinance,” meaning he doesn’t have explosives in his spine that would be set off if he were to leave Westworld—one indication that someone is a host. But we’ve seen those explosives removed from Maeve in season 1, so it’s not necessarily the only indicator that someone’s a host.

After killing Emily, William digs into his own arm with a knife in an attempt to find a host port (or see if he’s human). We don’t see the end result, but it’s a lot bloodier than when Bernard opened his arm for his own port earlier in the episode.

Ford said that he wanted to leave William one more game, one that William was all-too-ready to play. But so far he’s lost far more than he’s gained, and even if he isn’t a host, he lost his humanity a long time ago.