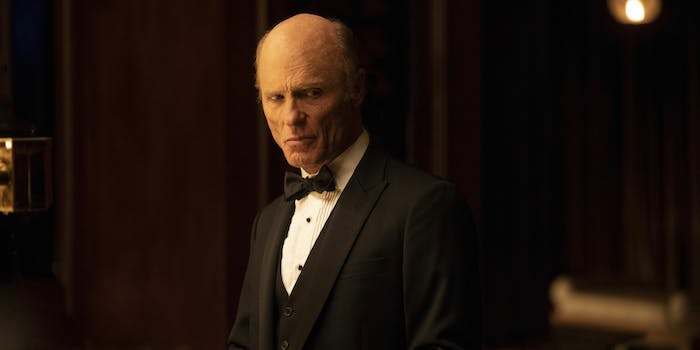 It's all in the profile.

Warning: This article contains spoilers for the latest episode of Westworld, “Vanishing Point.”

As we learned earlier in Westworld’s second season, a massive experiment has been hiding in plain sight in Westworld for decades as Delos gathered as much as it could on its own guests. But how Delos got its hands on the data remained a mystery until now.

The reveal came in one of the many tense conversations held by William and his estranged daughter Emily as they waited for backup to take an injured William out of the park. She learned what Delos has been doing all this time, and instead of being appalled, she tells him she wants in. But she’s confused as to how Delos collected the data beyond the DNA. Instead of telling her, William showed her with the tip of his hat.

“It didn’t matter who they said they were, who they thought they were,” William explained. “We saw underneath all that. We saw inside them down to the core.”

Emily is horrified and impressed, but she just as quickly puts the hat back on. This time she’s a willing participant, but it won’t save her in a faceoff against the man William really is now that his own mask is finally dissolved.

The reveal that Delos’ scanners are contained in the cowboy hats worn by guests is clever. The black-and-white cowboy hats are ubiquitous to the park and show itself. The hat is even a marker outside of Westworld’s perimeters: HBO hands out black or white hats to guests who visit the show’s pop-up venues at conventions and festivals.

It’s also a key aspect of blending in while in Westworld. In the show’s second episode, “Chestnut,” a young William, newly dressed, is offered the choice of which hat he wants to wear before entering the park by Angela, the host that has been assisting him.

“Hello cowboy,” Angela said. “There’s one final touch: which would you prefer?”

William chooses the white hat, but by the end of the season he picks up a black hat, which he still wears over 30 years later even though he more than anyone knows what Delos collects by donning it.

What’s less clear is how Delos monitors guests in other parks. Are there different kinds of hats for each park? Many of the guests at the Raj are seen wearing hats earlier in the season, but Nicholas and Emily aren’t wearing them as they press on their own excursion, and we don’t encounter any guests in Shogun World. What happens when guests lose or abandon their hats? And how much can Delos gather from one-time guests compared to repeat visitors like William?

What we do know is that Delos has more data than we can imagine. And the placing of it is very familiar.

Most of Westworld’s remaining characters have been heading somewhere. They each have a different name for it such as the Door, or the Valley Beyond. Akecheta and Ghost Nation believe that it will lead them to a new and right world. Dolores wants to burn it all down to the ground, possibly even more so now that she knows what Delos is up to. Delos wants to protect its own assets while Bernard wants to secure them. Maeve, if she can get there in time, wants to reunite with her daughter.

Bernard explained exactly what this hidden endpoint is. He calls it the Forge, and it’s basically an even bigger version of the Cradle, except instead of host data it’s guest data. And as we’re reminded, Delos has been collecting that data for a very long time. Whoever gets control of the Forge will likely turn the tides of the war that’s been waging for the entire season.

“That’s where the hosts are headed,” Bernard said. “Imagine what one host could do with that trove of information. That’s why we need to get there first, to secure it and leverage it to end all this. Dictate the outcomes we want.”

Except for much of the episode, Bernard isn’t completely in control. Robert Ford, embedded in his mind, is still leading him and suggesting his next move, but when Ford wants him to kill Elsie before she betrays him, Bernard rebels.

What are Ford’s motives? Even though we saw Bernard remove him from his own code, is Ford really gone? If he is, Ford has a backup plan: After delivering his message to Maeve, he unlocked her core permissions and uploaded himself into her mind.

This is who William is

Early in Westworld’s second season, we see William attempt to sell Westworld to Jim Delos, who doesn’t see why he should invest money in allowing people to fulfill their fantasies. William argues that the endless possibilities of the park offer something bigger. We all know how that turned out for Delos, Inc. But it revealed the truth about William most of all.

The episode’s flashbacks take us into the near-past and to a charity function attended by William, Emily, and Juliette (Sela Ward). It’s often tense as Juliette lashes out and tells William that she sees through his façade, and Juliette is visibly angry as her family tries to get her help, but despite how everything played out that night, Emily still doesn’t know what would drive her mother to take her own life.

At one point, Juliette described her husband as a virus that infected her brother, father, and herself, and in “Vanishing Point,” we see it take hold. William is increasingly paranoid—especially after Lawrence betrayed him—and believes that everyone around him is a host sent to him by Ford. That includes the crew sent to take him away as well as his own daughter, whom he doesn’t hesitate to shoot. Nothing will stop him from reaching the Door, even if he turns into the monster people think he is in the process. Then again, that person may have been there the entire time.

During that same charity function, Ford gives William a metal card, telling him that “for a self-portrait, you may find it’s not very flattering.” Ford aims to give William one more game, but his chess move already has one consequence. William places the card in a copy of Slaughterhouse-Five, which Juliette retrieves after she’s left alone. It shows us William’s profile (and footage) of his time in Westworld, which includes notes that he has a persecutory subtype, delusions, and a paranoid subtype.

William—especially the older, Man in Black version—is a polarizing character on Westworld; people either love him or hate him. But his actions over the past three decades in Westworld have led to destruction, chaos, and the deaths of practically his entire family. By shooting his own daughter, he crossed a line, and if he was the grizzled anti-hero people liked rooting for before, he’s pretty much gone full Walter White now. There’s no coming back from that—and the end result might still blow up in his face.

Westworld reveals just who the guests are, but now that most of the hosts have free will, it just might reveal who the hosts really are as well. We see Akecheta driven by the need to lead his people into the real world and wake up other hosts around him. Maeve wants to reunite with her daughter even though she knows it was in the programming.

But Dolores? We’ve known how far she’ll go—even reprogramming Teddy to become a ruthless and loyal killing machine—to achieve her goals, and now it’s come to haunt her.

Her reprogramming of Teddy midway through the season was, to her, necessary for him to survive the unjust world they lived in. But it was also a violation of Teddy’s programming to the core. He was made to be callous and cruel (but completely faithful to Dolores) by a Delos tech. For the first few episodes after that change, he was compliant. But now he realizes just what she’s done to him, and not only has he been fighting those drives, it’s torn him apart.

Teddy will never betray Dolores because it’s not in his programming, but he’d rather die than go any further with her to the Valley Beyond. And thanks to the destruction of the Cradle, Teddy as we know him is likely gone.

The season finale will bring all of Westworld’s forces together as they fight for control of decades of Delos data. But it will also bring two of the park’s darkest forces together once again. Their reunion was never going to be a pleasant one, but now that they’ve both been brought to the brink, the chaos will be downright terrifying to witness.