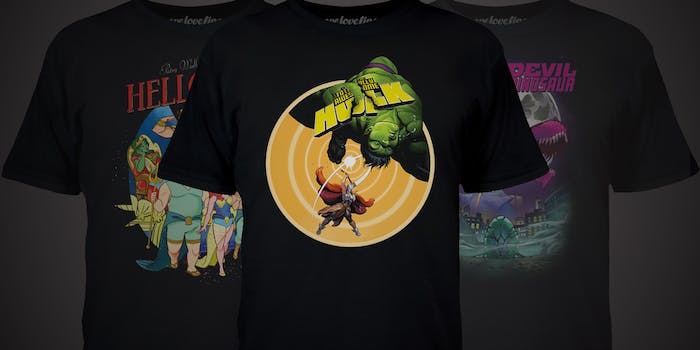 The shirts are only available for a week before the next batch replaces them, so act fast!

Comic book readers know they can expect new stories every Wednesday. It’s a bright spot in the middle of the work week—and now it’ll be even brighter for fans who want to add comics to their fashion.

Marvel has partnered with online retailer WeLoveFine for a comic cover T-shirt program, with the retailer releasing new shirts every Wednesday featuring art from select Marvel issues debuting that day. The $15 shirts will be available in men’s and women’s sizes.

Underneath each shirt, you’ll find a link to buy the relevant comic issue on Marvel’s website.

The limited-run designs will only be available for a week before WeLoveFine replaces them with the next Wednesday’s shirts.

The program launched its fifth round of shirts this Wednesday with designs from comics like Captain Marvel, Moon Girl and Devil Dinosaur, Captain America: Steve Rogers, and Nighthawk. There are 10 shirts in this week’s release—more than in previous weeks, which typically saw between six and eight choices.

#CaptainMarvel #5 is available on a t-shirt for 5 more days! Get it here: https://t.co/7j9gGHtS5d pic.twitter.com/jVphniLngH

The new #Marvel #Carnage cover tee is only available for a limited time! Grab it here: https://t.co/7j9gGHcgGD pic.twitter.com/RvQuzjUwqc

Shawnee Hale, a WeLoveFine spokesperson, told the Daily Dot in an email that the company gets covers from Marvel each week and decides which ones will translate best into an interesting shirt.

Hale said the program lets WeLoveFine offer shirts based on characters and comics they wouldn’t normally feature. By seeing what sells best, they can create more of the merchandise that fans want to wear.

It’s an interesting idea that should help expand the range of wearable Marvel gear at WeLoveFine, and it certainly gives comic readers a fun new way to enjoy their titles each week.

You can see more of this week’s comic cover shirts below. You can find the rest, and see what has previously been offered, on WeLoveFine’s website.