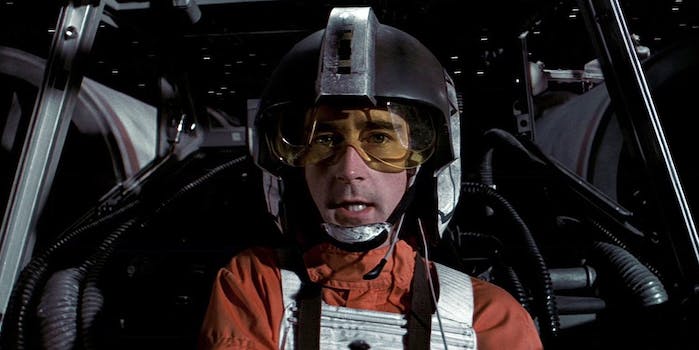 It's kind of fitting.

Wedge Antilles is one of the most popular minor characters in the Star Wars saga. His screentime in the original trilogy was minimal, but thanks to being a hotshot pilot with a cool name, he has lived on for decades in the collective heart of Star Wars fandom.

But despite appearances in Star Wars video games and a few tie-in books, he won’t be returning for the new movies.

Wedge Antilles might actually have been a plausible choice for a cameo appearance in J.J. Abrams’ sequel trilogy, because he’s a fan-favorite character, but wouldn’t need to have a major role. Plus, his presence wouldn’t be any kind of spoiler, so they could have announced it and left fans to speculate to their hearts’ content. Unfortunately, original actor Denis Lawson has made it clear that he isn’t interested in appearing in any more Star Wars movies. To be precise, he finds the idea “boring.”

SlashFilm reports that at a Q&A for his latest film, The Machine, Lawson was asked if he might return to the role of Wedge Antilles. His reply? “I’m not going to do that… They asked me but it just would’ve bored me.”

Well, fair enough. Big blockbuster movies like Star Wars aren’t for everyone, particularly when a five-minute part might wind up requiring weeks of filming and publicity work. Denis Lawson has a successful career elsewhere, and in a weird way it’s kind of cool to hear that the real-life Wedge Antilles had the balls to turn down Star Wars.