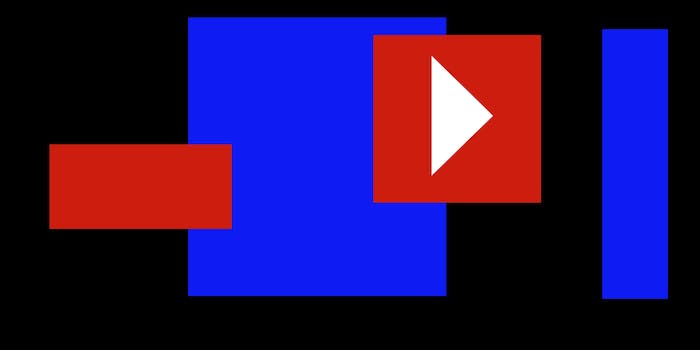 New evidence suggests that this weird YouTube channel may be connected to Google employees.

When we wrote about the bizarre YouTube channel Webdriver Torso towards the end of April, very little was known about it. Almost two months later and only slightly information has emerged, despite reports published by the Guardian and the BBC.

First, a refresher: Webdriver Torso is a YouTube channel that has uploaded over 77,000 videos since September of last year. Each video takes the same format, cycling through 10 “slides” numbered 0000-0009 over the course of 11 seconds. Each slide displays two rectangles, one blue and one red, which change shape and position in each successive slide.

Now, when you search the terms “webdriver torso” on YouTube, the whole page turns into an imitation of these videos. 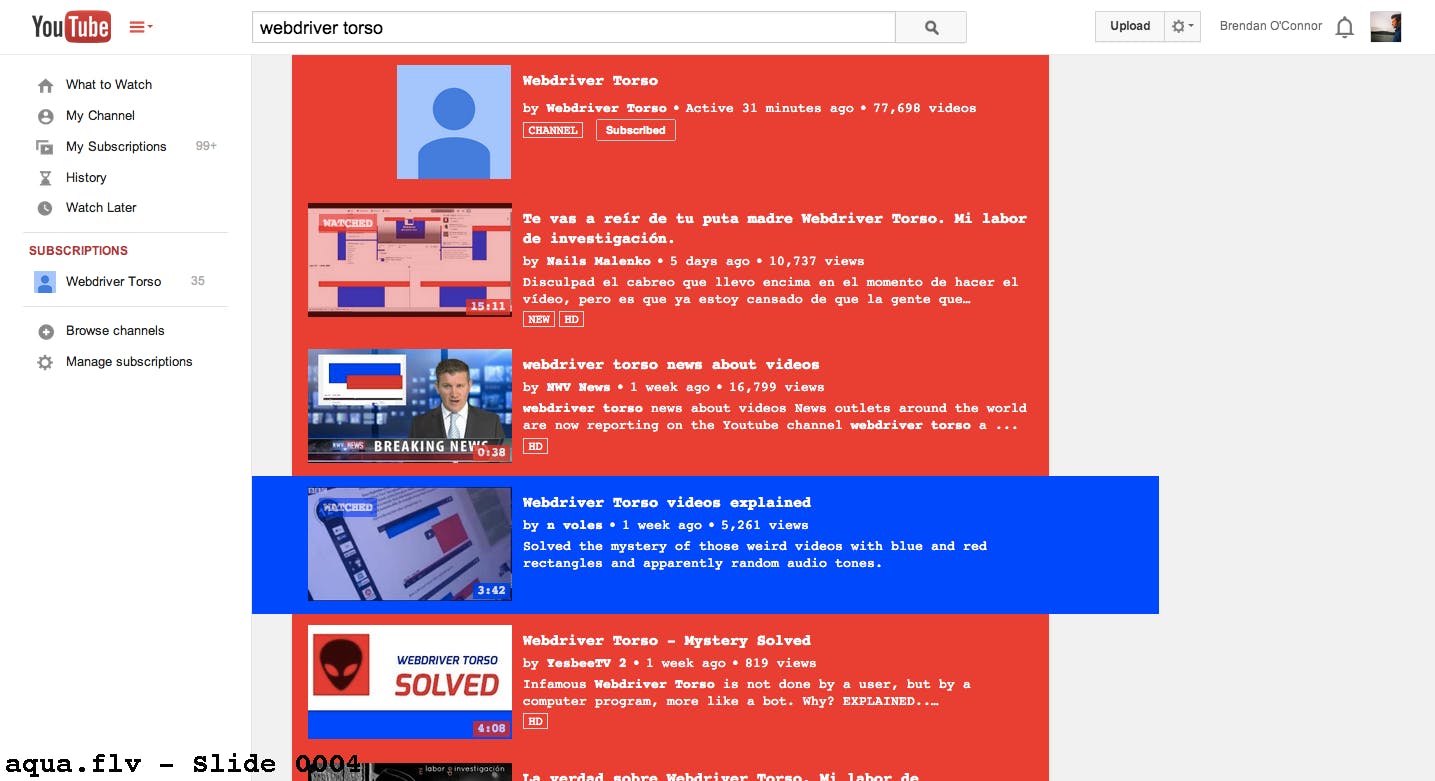 There’s no reason to believe that this redesign of the YouTube layout to imitate the Webdriver Torso aesthetic is an admission of Google or YouTube engineers’ involvement in the original phenomenon, but at the very least it signifies that these folks are aware of the channel and the theories surrounding it. In the bottom left corner, the text “aqua.flv – slide 0000,” counting up and repeating as in the videos, links to various videos describing theories about who is behind Webdriver Torso; each page of the search results links to a different video.

Yesterday, I received an email from an Italian blogger who writes under a pseudonym “Soggetto Ventuno.” Venturo shared with me his theory that Webdriver Torso is, in some way, connected to Google’s office in Zurich. Google has not responded to multiple requests for comment and clarification on this story; however, after Venturo published his theory on his blog, several of the videos he embedded were either made private or taken down altogether.

According to the YouTube data site Channel Graphs, Webdriver Torso is a part of a larger network called “ytuploadtestpartner_torso.” The YouTube channel by this name hosts four similarly cryptic videos, three of which are behind a paywall. Here is the one that is not:

The Google+ account associated with this YouTube channel has several other profiles in its circles that post short videos very similar to those posted by Webdriver Torso, including an account called Ekaterina YPE. (According to LinkedIn, Google Zurich employs an individual named Ekaterina Kamenskaya.)

The “ytuploadtestpartner_torso” Google+ account is also linked to the Twitter handle @pomtorso (locked subsequent to Ventuno’s post) and a still-public Facebook account called Timmy Tester. Timmy Tester has posted many links (accompanied by incoherent descriptions) to YouTube videos—all of which have since been made unavailable—since joining Facebook for his one friend, “Johanens Leitner.” This Leitner is, apparently, a Google employee.

Although spelled differently, this is surely the same Johannes Leitner listed as a Google employee on LinkedIn. Leitner is also Facebook friends with one Matei Gruber, who lives in Zurich; a YouTube user by the same name (who wears a YouTube T-shirt in his Google+ picture) posted a video of the Zurich opera house taken using Google Glass last July—well before Glass was available to anyone other than Google employees.

In its report, the BBC dug up the only comment that the original Webdriver Torso account has ever made: “Matei is highly intelligent.”

In a further twist, that comment was made on one of two videos uploaded by the Webdriver Torso account that do not conform to its usual style: The “Matei” comment was left on the Google+ cross-posting to a video of the Eiffel Tower lit up, according to this redditor, for France’s 2013 celebration of South Africa.

So what are we looking at here? Nobody is offering any real answers, just pointing to pieces that might fit together into a semi-coherent picture—a very easy thing to do on the functionally infinite Internet. The simplest explanation is probably that some programmer left an automated multi-uploader test program running, maybe even forgot about it for a while, found it again, and decided it’d be funny to just let it ride, plunging through the firmament of the Web, accumulate an ever-growing debris-trail of theories, mythologies, and slightly tongue-in-cheek news stories as it goes.

I’d much rather that be the case—that there is no meaning at the center of this puzzle—than it be some awful viral marketing scheme. The other anomalous video is only available in France; you have to pay two euros to watch it—it’s a clip from Aqua Teen Hunger Force, and it was uploaded a month before the first rectangle video. If this turns out to be 2014’s version of the 2007 Aqua Teen bomb-scare I am gonna be so pissed.