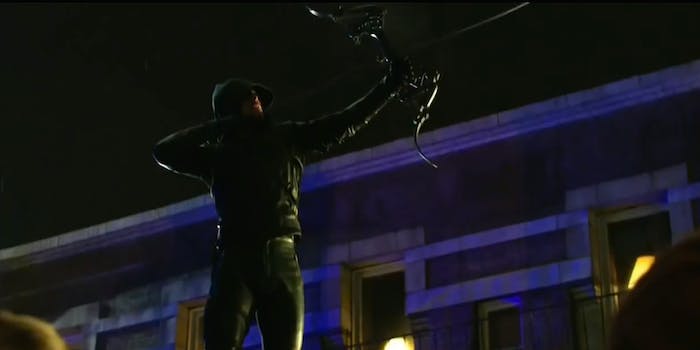 From superheroes to secret agents, evil doesn't stand a chance.

Deciding what to watch when you plop down with Netflix can be a difficult task. If you’re looking for a show of the superhero variety, it’s even harder. While there are quite a few animated superhero shows you can stream right now, the live-action options are a little rarer. That doesn’t mean you can’t get your hero fix, however.

From comic book adaptations to original characters, there are still live-action options for streaming if you want to watch some heroics. Some of them are superheroes, others have special powers, and many are ordinary people trying to make a difference in their extraordinary worlds and situations.

Here are nine live-action hero shows you should stream right now on Netflix.

If you haven’t watched this Joss Whedon show, drop what you’re doing and start binging all seven seasons right now. The main character, Buffy, is a teenager Slayer with powers that she uses to fight evil as she tries to navigate high school and college at the same time. Buffy gets a little help from friends along the way as they encounter vampires, witches, werewolves, and much more. There’s comedy, drama, moments that will make you cry, and moments that will make you laugh.

With its impressive cast, storytelling, and female lead, there’s no denying this show paved the way for many future TV series, making it a must-watch.

There’s a lot to love about Arrow. Inspired by DC Comics’ Green Arrow, this series on The CW follows Oliver Queen on his journey to becoming a hero. The beginning of the first season is a little rocky, but eventually the show finds its footing. By season two you’ll be hooked. It helps that the show has some amazing supporting characters, and the little references to the comics are a lot of fun to catch. Superheroes seem to be appearing everywhere on TV nowadays, and many of them have Arrow to thank for showing that a comic book show could be successful again on TV.

The first two seasons are on Netflix so you can catch up as the third season continues to air this year.

Taking a trip back in time, this is one of the only classic live-action superhero shows available to stream on Netflix at the moment. There may have been many versions of Marvel’s Hulk since this show premiered in 1978, but there’s something about Lou Ferrigno’s version of the large green character that has remained iconic. Ferrigno’s Hulk shows up throughout the travels of Dr. Banner, played by actor Bill Bixby, as the doctor looks for a cure. Watch all five seasons to see what earned this show a place in so many fans’ hearts.

For anyone looking for more of a classic mythology hero, there’s Kevin Sorbo as Hercules. It looks very much like a product of its time, but if you don’t think too much about it the ’90s aesthetic adds to its charm. There’s something just plain fun about watching Sorbo run around with his trusty sidekick Iolaus (played by Michael Hurst) as they fight bad guys and perform heroic deeds in this fantastical ancient world. Plus it gave rise to another show that has also made our list. Before you get to that one, though, you should check out what started it all with Hercules.

Chuck faltered a few times throughout its five seasons, but the NBC show remains one of the best geek TV series to ever air. Chuck becomes a hero by accident when he downloads a government database of secrets into his brain by mistake, starting him on a journey to go from an electronics store’s computer expert to a capable government spy. The show has a lot of heart as we see Chuck struggle with his situation and eventually come into his own with a little help from some other great characters you’ll come to love.

There are a lot of pop-culture references sprinkled in the show that make it a lot of fun to watch and will help you relate to the nerd-turned-secret agent. It’s probably one of the reasons the show inspired a loyal fanbase that ended up creating a campaign to save the show from being canceled. How can you resist seeing something that’s had such a huge influence on the people who watch it?

What happens when regular people start waking up with amazing abilities? That’s the situation Heroes explores, and it does a fantastic job of it in its early seasons, particularly season one. Later seasons lose some of the magic, but despite the declining quality the show it’s worth watching to see what happens when everyday individuals turn into heroes. You’ll also get to see the performance that arguably put actor Zachary Quinto on the map. There’s a reboot on the way, so why not watch the original before that hits the small screen?

To be completely honest, this show is horrible at the beginning. It doesn’t start to get good until about 15 episodes into the first season, which is the only season streaming on Netflix. Season 2 is airing now. Still, by the end of the season you’ll be wanting more. The show took a long time to find its way as it followed agent Phil Coulson and his team dealing with threats to the planet. Now it’s a show you should watch whether you’re a comic book fan or Marvel fan or not. Of course if you’ve watched the movies you’ll better appreciate how well the show ties into the cinematic universe.

If you’re not comfortable skipping ahead to the good part, this show may be a tough slog at first. Trust us when we say it’s worth it for those final episodes —and definitely so you can be prepared to watch the stellar second season.

The original Power Rangers from your childhood are back with all three original seasons ready to watch with a click of your mouse or remote control. You probably at some point yelled “It’s morphin’ time!” as a kid at the playground and imagined battling the evil alien forces of Rita Repulsa with your friends. Reliving it now might not have exactly the same effect, but it might make you feel like a kid again!

If you’ve never seen it before, the show might look ridiculous at first. Just don’t think too much about the teenagers morphing and using robots, and embrace Zordon, Alpha, and the sheer fun of watching these heroes.

It seems fitting to end this list as it began, with a cult hit featuring a woman hero. This Hercules spinoff features a warrior named Xena who travels around on a quest to redeem herself by helping others. She is accompanied by her best friend, Gabrielle, who assists her in fighting a variety of villains. The show will look as cheesy to you as its predecessor and, yes, it’s a bit over-the-top at times. However the incredible team of Lucy Lawless and Renee O’Connor alone make the show worth a watch.