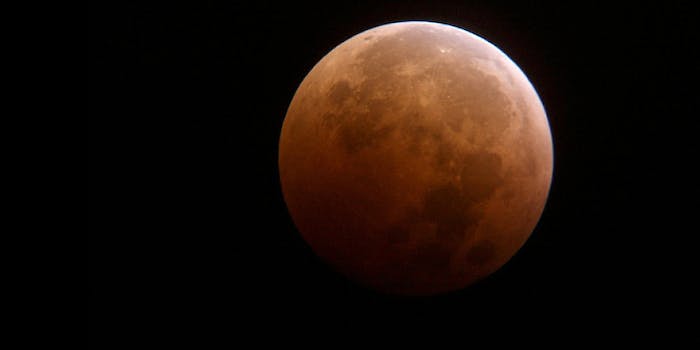 What is a blood moon? Everything you need to know about the lunar eclipse

Early Wednesday morning, many around the world will be greeted by a fantastic sight. Australia, western Asia, locations in the Pacific Ocean, and most of North America will view the Moon passing through the Earth’s shadow for a total lunar eclipse. That’s what we call a blood moon.

This will be the second time we’ve had the chance to see a total lunar eclipse in 2014. It gets its rather ominous “blood” name from the red, copper color the Moon turns during the eclipse. According to Space.com, some people may even be able to witness a “selenelion” event—an incredibly rare cosmic moment wherein the eclipse and sunrise occur simultaneously.

If you’re worried about catching this awesome sight, there are a number of resources you can turn to online. You can use this lunar eclipse computer from the Navy to determine when you can see it in your area. If it’s cloudy in your area, watch one of the live webcasts.

Starting at 3am ET Wednesday, NASA will be hosting a live Web chat with its moon experts to answer all your blood moon questions. The live broadcast of the eclipse will be on Ustream.

Another option for viewing the eclipse is Slooh’s webcast starting at 5am ET. Learn more about total lunar eclipses in the NASA YouTube tutorials.

Whether you catch it online or live and in color, don’t miss it.