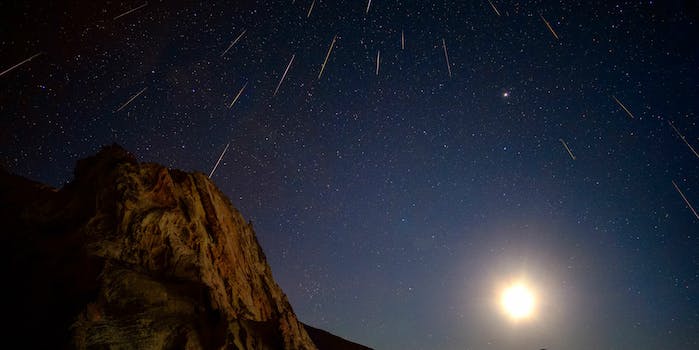 The Geminids Meteor Shower will light up the sky tonight

Get ready to be amazed!

The sky will be littered with Geminids meteors tonight, and everyone in the Northern Hemisphere should be able to catch a glimpse of the action.

Every year in December, the Earth moves through a flurry of dusty debris that comes from a rocky object called 3200 Phaethon, which scientists have yet to classify (it could be a comet or an asteroid). When the dust collides with the Earth’s atmosphere, it burns up and sends shooting stars flying across the sky, a phenomenon known as the Geminids meteor shower.

How to watch the Geminids Meteor Shower

According to Cook, if weather conditions are favorable in your region, you should be able to see about one visible meteor per minute starting 7:30pm (your local time) on Wednesday, Dec. 13, and going until dawn on Dec. 14. Those who live in areas with the least light pollution will get the best show, so try to get somewhere dark tonight if possible!

For the city dwellers among us who can’t get away from the light, check out NASA’s livestream from the Marshall Space Flight Center in Huntsville, Alabama. It will start around 6pm CT.

Though there were some other notable meteor showers this year, the Geminids is anticipated to be the most spectacular show of 2018. This year’s crescent moon will not rise until early morning, so the sky should be perfectly dark for viewing.

“With August’s Perseids obscured by bright moonlight, the Geminids will be the best shower this year,” said Bill Cooke with NASA’s Meteoroid Environment Office. “The thin, waning crescent Moon won’t spoil the show.”