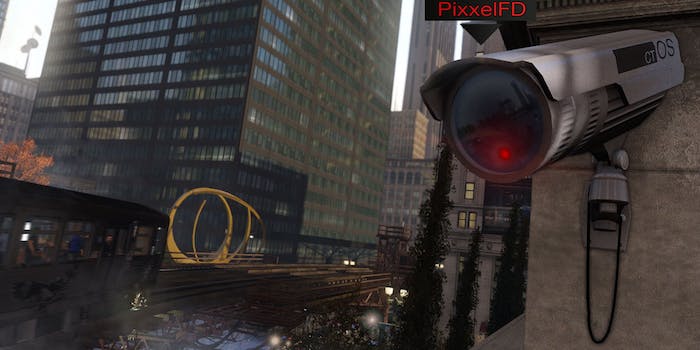 Why I couldn’t get through ‘Watch Dogs’

Our review of the highly anticipated new release from Ubisoft.

I’ve talked before about how video games can no longer be excused for having bad stories. I could have said “terrible stories,” but that was before I played Watch Dogs.

Let me be upfront about this: I have not finished Watch Dogs. I’ve only gotten through the first Act out of five in the campaign. I subscribe to the notion that when a reviewer has reached the point where nothing could happen to change how he feels about the game, it’s time to write the review.

I can’t suffer through Watch Dogs any further, because the story and the writing are so atrociously bad. Having decided I couldn’t actually care about this game, I started to focus purely on the game rules and design. I didn’t find much to praise there, either.

Watch Dogs is a story about a computer hacker named Aiden Pearce who steals money from a rich person. The rich person then hires a thug to “scare” Pearce. This result is one of Pearce’s tires being shot out while he’s driving with his niece, who dies in the accident.

Pearce sets out on a mission of revenge, armed with a super-duper smartphone through which he can hack and manipulate ctOS, a computer program which controls the infrastructure of near-future Chicago. Traffic lights, trains, sewer pipes, electrical junction boxes, forklifts, gates, street bollards, bridges, garage doors, and gates—they’re all elements that Pearce can manipulate with his smartphone.

Imagine you’re being chased by the cops. You switch the traffic lights to get people into the intersection behind you, and hope the cops crash. If that doesn’t work, you can raise some street bollards for the cops to crash into. And if that doesn’t work, you can trigger a steam pipe to explode, sending a plume of dark grey steam into the air which will wipe out anything or anyone nearby.

Sounds like a neat premise, right? It wasn’t enough to get me past the fact that Aiden Pearce is an utter, complete prick.

Pearce is supposed to be some sort of vigilante. You’ll hear people on the street talking on their smartphones about the guy with the mask, which is you. I have no idea why Pearce is a vigilante. It hasn’t been explained to me yet, and I don’t care enough about him to stick around and find out.

I don’t care about Pearce because his thieving got his niece killed, and yet he continues to be a thief. Pearce’s magic smartphone can hack the smartphones of people on the street and, in some cases, siphon money out of their bank accounts.

It’s kind of like if Batman stole from the people of Gotham to fight against crimes like, well, robbery, instead of rich Bruce Wayne paying for all of his gadgets. It makes no sense.

Early in the game, before players can unlock a skill that allows them to zero in specifically on people with rich bank accounts to pilfer, the only way to find money is to hack anyone whose phone is hackable. Sometimes this results in a transfer of funds, which the player can withdraw from an ATM. Other times it results in eavesdropping on text exchanges or live phone calls.

One could argue that it’s the player’s choice whether to hack people’s phones or not, but you really need money to buy weapons and ammo and gadget components. At least early on in the game, stealing from hacked bank accounts is the best way to procure funds.

Watch Dogs may also be the victim of bad timing. The game was announced in the summer of 2012, before the NSA’s spying became common knowledge and the ensuing backlash. Now, when I see Pearce hacking into peoples’ phones and listening in on private conversations, this only helps to reinforce my negative feelings toward him.

Near-future Chicago, but not really

Pearce, for me, was a lost cause, so let’s talk about the city of Chicago as depicted in the game.

The Grand Theft Auto series presents open-world environments that are meant to feel authentic. From the conversations of passers-by on the street to the fake television and radio stations and street ads, the city of Los Santos in Grand Theft Auto V feels like an actual place. It’s like an alternate reality out of a Twilight Zone episode that mocks American culture.

The Saints Row series takes the opposite tack. There is no sense of “realness” to the city of Steelport. It is a giant cartoon, a landscape for buffoonish action and mayhem, and it can be hilarious. The Saints Row games don’t take themselves seriously at all. The storylines are insane, and the characters are over-the-top.

Watch Dogs clearly wants to take itself seriously. The near-future Chicago depicted in the game is clearly meant to feel like a real place, but it feels more like the city of Steelport than it does the city of Los Santos.

If I drive a car into an intersection in Los Santos and it blows up, the cops or the fire department are dispatched. People will run away from the scene, and I’m going to get in trouble.

During my campaign run in Watch Dogs, I concluded a car chase scene by abandoning my car in the middle of an intersection. While subduing the poor schmuck I was chasing down, I heard something explode. Turns out it was the car I’d abandoned, ostensibly because I’d wrecked it pretty good. The explosion had also caught another car on fire.

I stood and watched, to see if the fire department showed up. It did not. I’m not sure there is a fire department in Watch Dogs. People kept walking past the burning car, either unaware or uncaring. Then the burning car exploded, which seemed to kill some people. I waited to see if an ambulance showed up. There doesn’t seem to be an ambulance service, either, in the Chicago of Watch Dogs.

I spent about 15 minutes setting fires and causing accidents, to see if the first crash was an aberration. No police, fire, or medical emergency responders ever showed up. Maybe everyone was on strike. Apparently the city also has no one on staff to investigate or fix the giant steam pipe ruptures I caused.

So then let’s talk about all the stuff to do in the city.

You can take Fixer contracts which involve delivering vehicles, or luring police away from areas of the city by driving vehicles, which result in cop car chases, which are annoying, at best. The driving in Watch Dogs is slippery. It lacks precision. Normally I avoid motorcycles in open-world games because it’s only a matter of time before I hit something and go flying off the bike.

In Watch Dogs, I preferred motorcycles because their small size made it easier to account for the inaccurate driving. I was less likely to hit other cars when the steering just didn’t do what I wanted it to do.

You can attack gang hideouts and criminal vehicle convoys, both of which usually result in some sort of firefight. The gunplay in Watch Dogs is kind of fun, but it’s not enough to carry the rest of the game. Especially not when the gunplay is built around the same sort of mechanics that you can find in a slew of other games.

There are augmented-reality mini-games which are apropos of nothing. There’s a mini-game where you run around jumping over fences and other obstacles to collect large, human-sized gold coins floating in the world. How is Pearce seeing these coins? Does he have AR glasses on that I’m not seeing?

Or there’s another AR mini-game where Pearce is holding an imaginary, holograph-looking gun shooting imaginary, hologram-looking aliens. Same question about the AR glasses. Also, why aren’t people on the street calling police to report this lunatic running around, miming that he’s shooting things which aren’t actually there?

These AR mini-games temporarily turn Watch Dogs into Saints Row. The utter lack of concordance between these two perspectives of attempted reality and foolish fantasy was something I couldn’t navigate. I couldn’t take the game seriously enough to put the mental effort into trying.

Then then are the “digital trips,” where it looks like Pearce floats away into The Matrix. My favorite digital trip is the one where Pearce is piloting a spider mech, and has to pass challenges like blowing up cars and shooting cops. When I went on this particular digital trip for the first time it was like Watch Dogs had finally given up on pretending, at all, that it was a game to take seriously.

What a missed opportunity. Even if Watch Dogs did enter development before the NSA scandal, there was so much potential to make a story about an over-networked society and its results on human behavior. Or some kind of relevant theme that would make the game a little interesting. Instead we got a game that doesn’t know what it wants to be, with a hero who’s a jerk, set in a city that is meant to feel real but which feels completely fake, filled with activities that range from boring to misplaced and surreal.