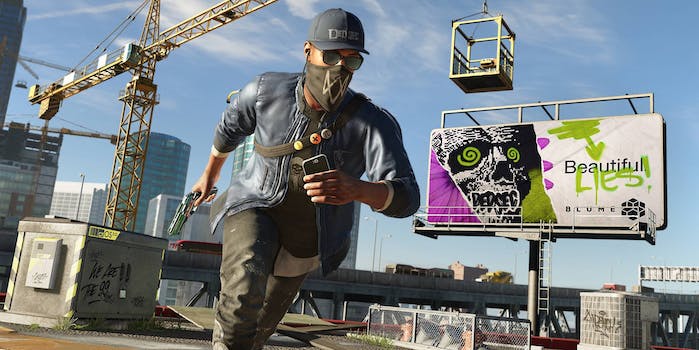 Ubisoft makes the right tweaks to make this sequel a winner.

Watch Dogs 2 is the most 2015 game of 2016, seen through the technicolor lens of an unofficial sequel to Hackers.

Its open world portrays the San Francisco Bay Area as a landscape ripe for ride-sharing from Marin to Silicon Valley, and one of its many themes articulates the timely concerns of monetizing personal information. It lampoons ex-Turing Pharmaceuticals CEO Martin Shkreli, while one of its more accomplished villains keeps a cool head through yoga. It’s Watch Dogs with personality, a marked response to the shortcomings of the first game in the series.

It’s a credit to Watch Dogs 2’s immersive designs that it was easy to project myself into this world, even though it already has an adequately defined and charismatic protagonist: Marcus Holloway of Oakland, California. His disdain for the municipal operating system known as ctOS—the same OS that controlled Chicago in the first game—leads him to join the hacking group known as DedSec. Unsurprisingly, his talents and fearlessness to go into places where he doesn’t belong proves to be a fitting complement to the rest of this eccentric cast of techno rebels. 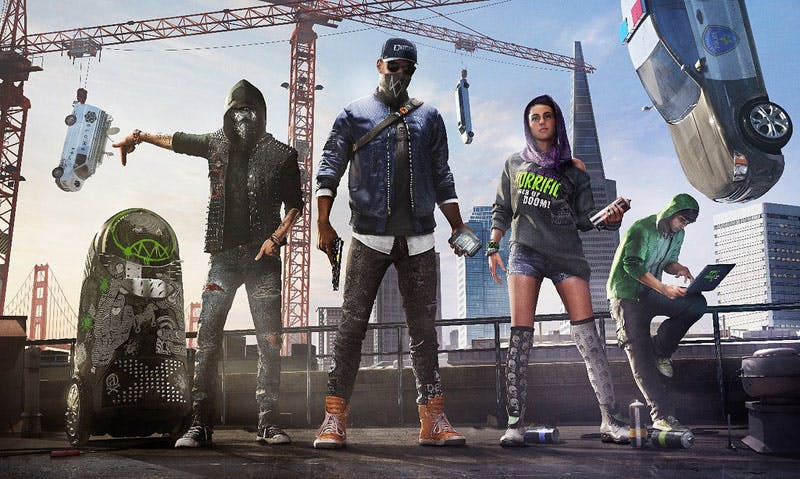 Watch Dogs 2 doesn’t trivialize hacking so much as it depicts a caricatured vision of hacker culture while still attempting to convey serious commentary about our interconnected society. A handful of this decade’s games have featured their share of personal branding incentives, placing value on becoming a fictional influencer. It works for Watch Dogs 2’s DedSec hackers: Imagine a glossier, more insecure version of the Anonymous hacktivists group that openly cares about growing its follower count. And, like the film Hackers, there’s little explanation about how Marcus’ hacking methodologies and modules work (not that your average player cares). 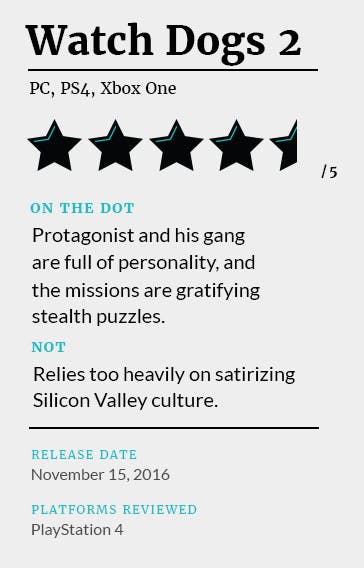 Between numerous racing games and Sega’s early 2000’s output, San Francisco is a city that has been reimagined and repurposed time and time again. Ubisoft’s vision of the City by the Bay understandably isn’t a 1-to-1 recreation, though it’s easy to spot tourist attractions like Fisherman’s Wharf and the windy stretch of Lombard Street. As a San Francisco Bay Area native, it’s been wholly amusing exploring every inch of this version of S.F. and seeing what has or hasn’t changed. The 30 by 10 block grid of the Outer Sunset district, for example, has been reduced to six blocks. Conversely, sections of the Presidio that house LucasFilm and Industrial Light and Magic are impressively accurate in scale. The studio also managed to shoehorn in an interlude set in what can only be described as a poor man’s Burning Man.

An urban open world intended for mischief and mayhem is only as good as its missions, and Watch Dogs 2 is littered with them. Its wealth of covert assignments showcase Ubisoft’s pedigree for stealth gameplay, right down to the enemy movement indicators on the minimap and their detection meters. Even if you’re a novice at sneaking, it takes only a handful of missions to figure out what play style works for you. There are opportunities for gratification even before you trespass into a tech company’s offices; it’s a matter of walking around the block to assess all available infiltration routes as well as using the closed circuit cameras to get different perspectives, hopefully from inside of offices. 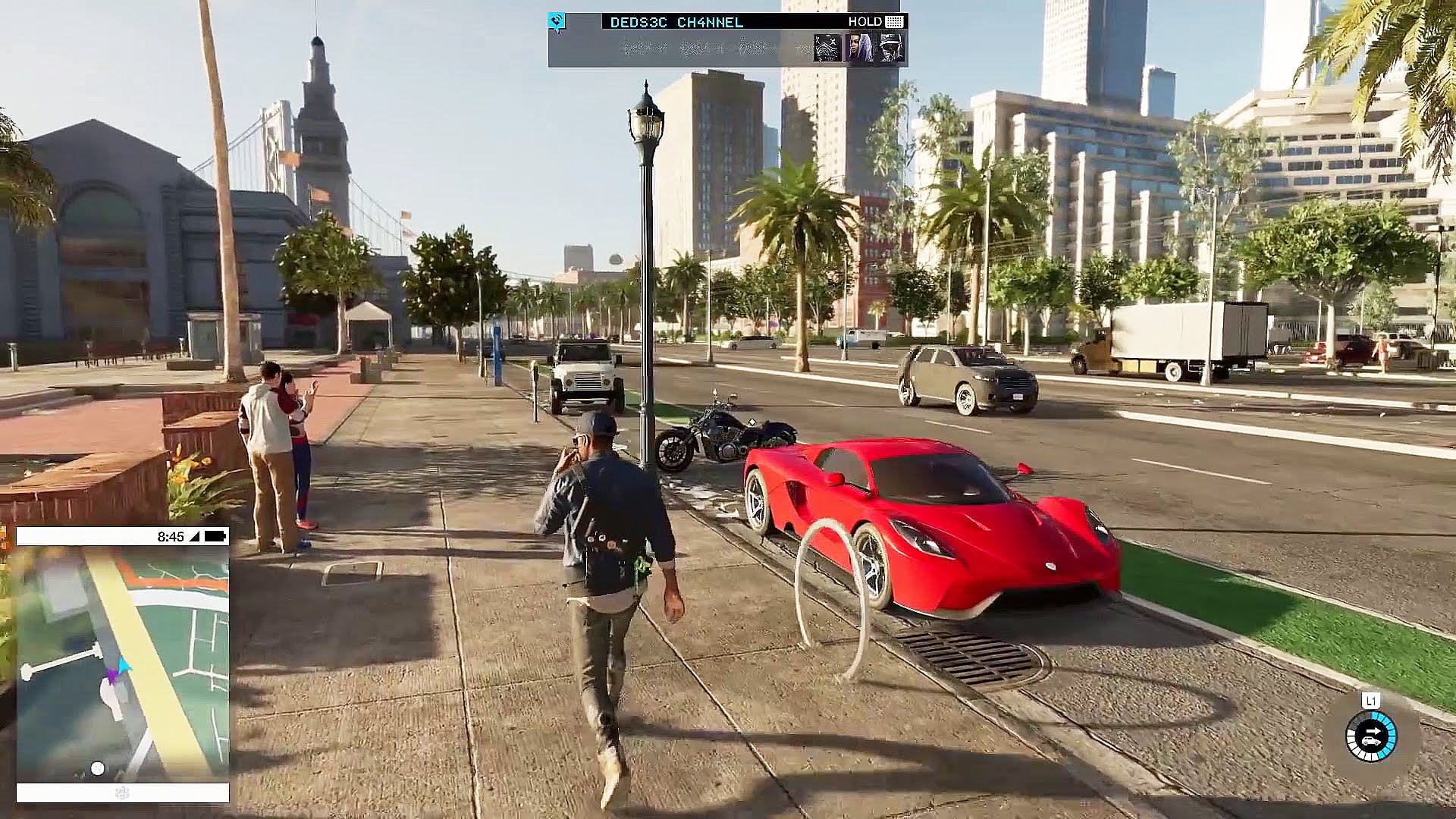 Watch Dogs 2’s best moments occur when you’re able to use this visual information to pull off an on-site hack without triggering an alert state. For less intensive but still goal-oriented fare, there’s the Driver SF app, a nod to the Ubisoft game of the same name where, as the slogan goes, “You are the wheelman.” These brief driving missions are often opportunities to interact with the comical aspects of the NPCs, characters who are often satirized heavy-handedly as techies with first world problems. One Driver SF objective, for example, involves helping someone track down their missing robot. This made for a worthwhile diversion: in-car banter included references to the film Short Circuit, and it was an opportunity to visit the northern part of Silicon Valley.

How you progress depends on how you embrace the hacker lifestyle how you choose to enhance your traditional open-world combat skills. Of the seven upgrade tree paths, only two can be applied to other urban open-world games: combat expertise and gadget mastery. You’d be cheating yourself if you devoted your initial pool of points to maxing out your firearms skills, but it’s still a viable route for success. It’s just boring to run and gun (or snipe) your way to your objectives when the police do not care in the long term if you’re a mass murderer. It’s way more gratifying to improve one’s techno-savviness, where catering to Watch Dogs 2’s strengths become your own strengths. It refines and expands upon the previous game’s progression system where—as corny as it sounds—you use the city and its vehicles as your weapon. You feel telepathically empowered when you can move cars without being inside them. Messing with traffic lights to cause accidents at intersections is an entertaining and practical way to avoid pursuers. 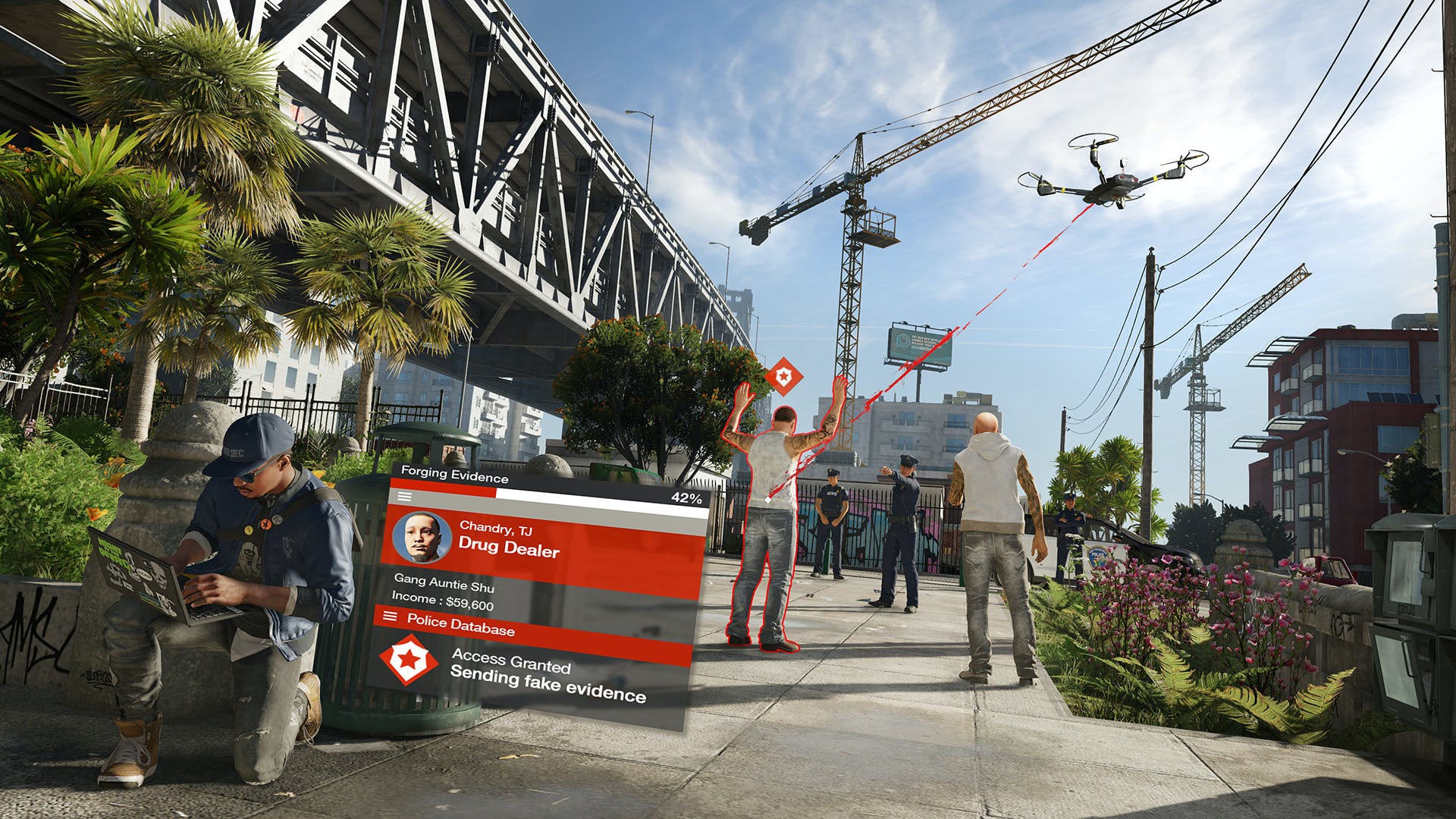 Like a hacker faced with multiple firewalls, making progress through the various branches of the skills tree requires more than just redeeming the points you’ve earned by growing followers. Many advanced upgrades demand an additional step, whether that means getting a blueprint or a set of instructions. It’s a clever method by Watch Dogs 2’s developers who added what is essentially an extra mission for each of these special upgrades. Many of these mini objectives make sense in the context of whichever enhancement you’re pursuing. For example, in order to gain the ability to shut down the city’s infrastructure for 30 seconds, you need to steal the schematics of S.F.’s electrical grid system. To increase the damage of your sniper rifle, you would need to find sniper training data. It’s a thoughtful way to extend one’s playthrough without making these additional steps feel like padding or filler.

It should be noted that navigating your way to the general area of these objectives is as easy as referring to your map or using the guiding line GPS. It’s also commendable of Ubisoft to not gatekeep fast travel, which is accessible shortly after the first mission. The only missing component is a fair checkpoint system. The majority of the missions involve sneaking into places where you’re not welcome and completing a series of objectives within each restricted area. Get killed and you’ll find yourself outside the perimeter of the area you attempted to infiltrate, losing all your progress for that location. 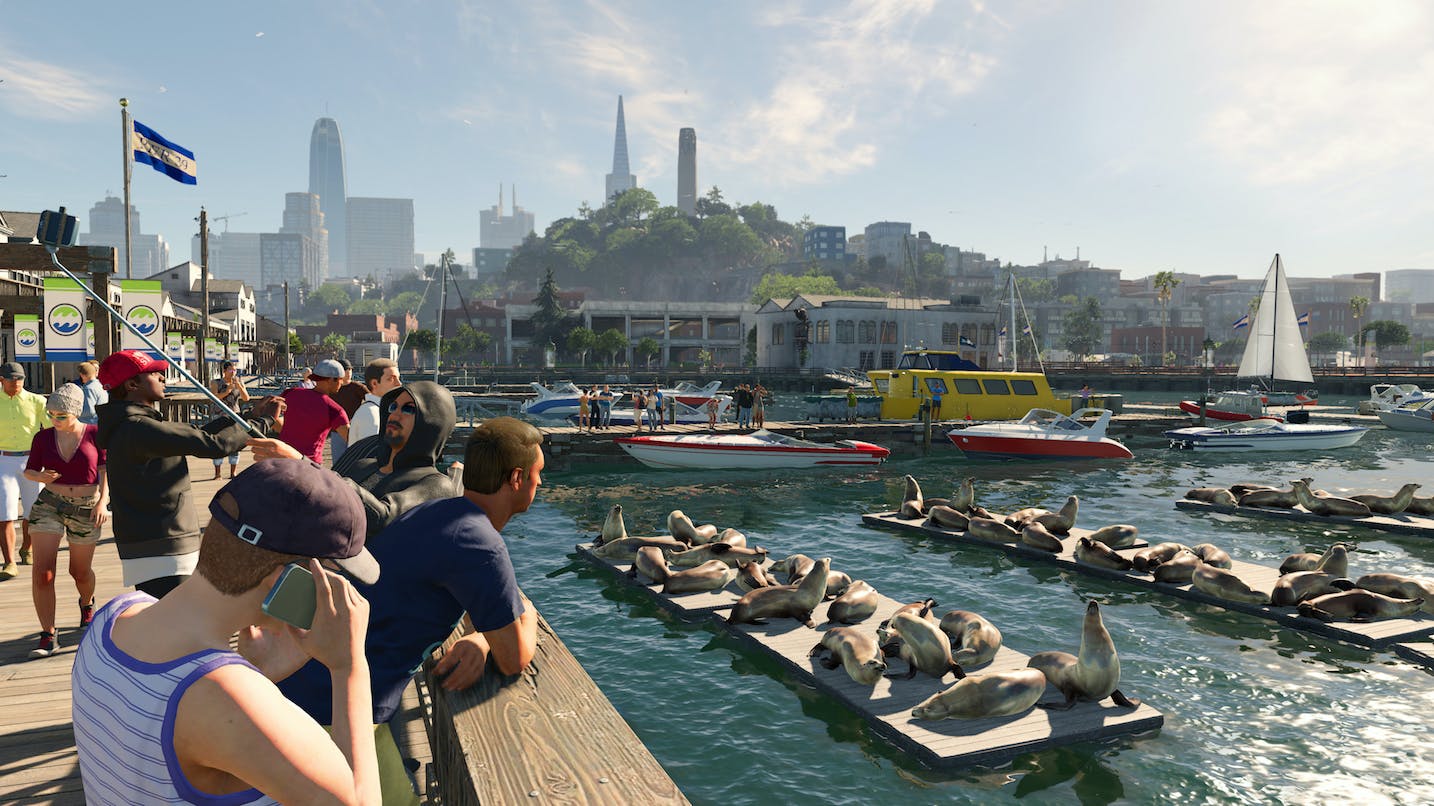 One of Watch Dogs’ initial selling points during its E3 2012 reveal was its interwoven single-player and multiplayer gameplay. It was adequately executed in the first game and this blending off modes is even better in Watch Dogs 2. Online confrontations are not unlike Dark Souls, where a stranger can unexpectedly invade your game, sometimes interrupting your story mission progress.

Once again, some of the best online thrills occur when you’re hacking another player in plain sight. There’s a sense of sadistic joy in watching your prey run around frantically in search of you while you’re simply sitting in a parked SUV or standing next to a tree within plain view of your opponent. The cooperative PvE online component is also well-supplied with non-story missions that can be tackled solo or with a friend. Much like the best moments of Ubisoft’s The Division, playing cooperatively in Watch Dogs 2 has its share of satisfying moments, especially if you approach a given situation like a pair of amateur SWAT policemen.

If one of Ubisoft’s goals for Watch Dogs 2 was to address the dark tones and lack of personality in the original game, the studio fulfilled that objective with more charming characters and snappier dialogue. While many of the mission objectives aren’t fundamentally any different in this second outing, the prevailing vibe of mischief adds color and humor to contemporary security and privacy matters, concerns that we should be taking very seriously in real life. Watch Dogs 2 is such a fully realized mid-2010s time capsule that—even if the online features are unavailable down the line—it would make for an especially insightful playthrough a decade from now, personal San Francisco native bias notwithstanding.

Editor’s Note: As of Nov. 16, 2016, Ubisoft has not yet fully activated this game’s online component. This review will be updated when online play is enabled.

Disclosure: A PlayStation 4 copy of Watch Dogs 2 was provided by Ubisoft for review.