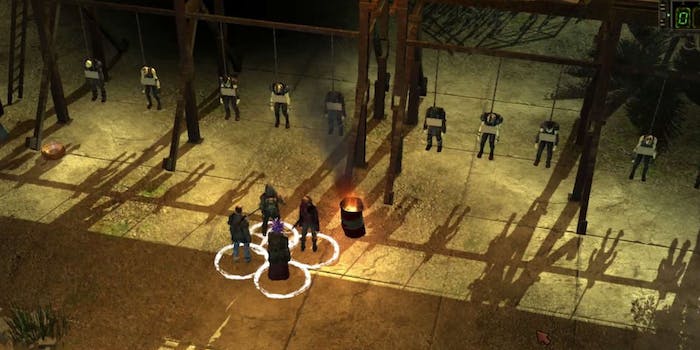 After a successful 2012 Kickstarter, the sequel to a game that inspired a generation is out.

The sequel to the spiritual predecessor of the massively popular role-playing game Fallout 3 is finally a reality. Wasteland 2 is a game no one thought they’d ever see, and if not crowdfunding, they wouldn’t have.

Wasteland 2 was released on Steam today. The game was funded via Kickstarter in 2012 with a fundraising goal of $900,000. By the end of the campaign, it had earned $2.9 million. The funding success was in part because of support from high-profile industry figures like Ray Muzyka, co-founder of BioWare, the studio behind the Dragon Age and Mass Effect franchises; Rob Pardo, former lead designer of World of Warcraft; and the highly respected comic book author and video game writer/producer Chris Avellone.

The announcement in 2012 that Fargo was Kickstarting the development of Wasteland 2 was also met with tremendous excitement by the gaming community owing to his credentials and reputation.

Fargo is the director of the original Wasteland, released in 1988. Wasteland was a role-playing game set in the Southwestern United States after a nuclear apocalypse. Wasteland incorporated text-based storytelling in the style of the original Zork series, turn-based combat, and experience point and leveling systems that will be familiar to anyone who’s ever played an RPG. More importantly, Wasteland presented the player with meaningful moral choices that permanently changed the world around them—far from the norm in its day.

Fargo is also the founder of Interplay, the development studio behind such colossal hits as the Baldur’s Gate fantasy role-playing game franchise, and the Descent shooter franchise. The Interplay series with the most lasting effect on the video game industry, however, is arguably the Fallout series, the spiritual descendant of Wasteland.

Fallout 1 and Fallout 2 take place in an alternate future, defined largely by America being stuck in a cultural and aesthetic style from the 1950s. A nuclear exchange between China and the United States in the early 21st century results in worldwide annihilation, and the Fallout games occur hundreds of years after that disaster.

Interplay lost the rights to the Fallout franchise in 2007 to Bethesda Studios. Bethesda went on to develop and publish Fallout 3 and Fallout: New Vegas, two of the most influential titles of the past decade. Wasteland 2 is Fargo’s opportunity to return to the post-nuclear apocalypse role-playing game setting that he pioneered.

The developer sentiments at the end of that release trailer are not just hype. Fargo meaningfully influenced the entire video game industry, and specifically a generation of game developers. Wasteland 2 is Fargo’s opportunity to apply his skills to what modern gaming PCs are capable of.

Beta access to Wasteland 2 has been available to some of it Kickstarter backers since Dec. 2013, and an open beta for all backers opened in June, 2014, but today is the first day Wasteland 2 is available as a commercial release. Early reviews and impressions of Wasteland 2 are positive.

Wasteland 2 is currently available on Steam for $39.99.