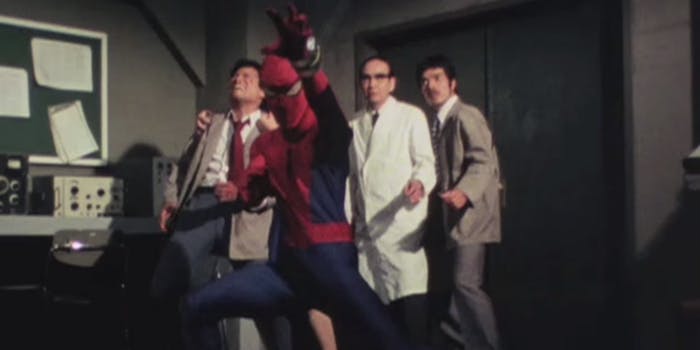 And you can watch it, for free, thanks to Marvel Comics

Marvel.com has released two episodes of the live-action Spider-Man television series that ran in Japan in 1978 and 1979, and they’re a doozy. Spider-Man has a giant, transforming robot that helps him fight little monsters who grow into huge monsters, like in every episode of every Power Rangers show, ever. Yes, this was really on television.

Marvel is tying the release of the episodes to Amazing Spider-Man #12, where the Spider-Man we know and love pulls his Japanese counterpart and his counterpart’s flying, transforming robot into his own reality. English-speaking audiences don’t have to worry about the language barrier, as Marvel has added subtitles to the episodes.

It’s a good thing they did, too. Western audiences would probably be utterly lost with some sort of English-language assistance. Japanese Spider-Man is largely unrecognizable to fans who know the character from Marvel comics. You can watch a large version of the first episode of Japanese Spider-Man here.

In the Japanese Spider-Man series, our hero has web-slingers, can climb on walls, and wears the classic red and blue suit. But the similarities between him and our Spider-Man end there.

There’s no Peter Parker snapping pictures for the Daily Bugle and living with Aunt May. Instead, we get a motocross racer named Takuya Yamashiro who lives with his “astro-archeologist” father, his little brother, and his two sisters.

Takuya doesn’t get his powers from a radioactive spider, but rather from an alien named Garia, from the planet Spider. Takuya is also given a spaceship called the Traveller, which can transform into a giant robot named Leopardon that he can pilot.

Marvel has also released the seventh episode, which you can watch here. Once you’ve finished it, we recommend another corny, 1970s live-action Spider-Man show that is just as marvelously funny: the first episode of The Amazing Spider-Man, broadcast in America in 1977.