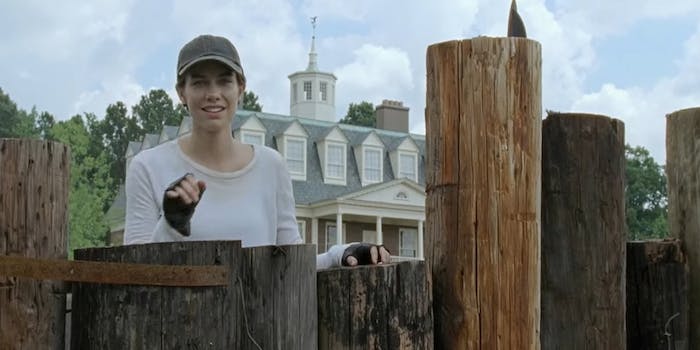 The subtle ‘Walking Dead’ tribute you missed in the midseason finale

The Walking Dead mid-season finale is starting to set up the upcoming war between the Saviors and the groups it controls, but it still managed to insert a subtle nod toward one of the series’ most beloved characters.

We haven’t spent much time with Maggie this season after we watched her react to the brutal death of her husband Glenn, but while Negan’s story has played out over several episodes, she’s thrived at Hilltop and gained the respect of its own people. But she also has spent her days climbing the wall of the settlement—and not because she’s on duty.

As we discovered by mid-season’s end, she was waiting for someone.

Although fans certainly loved that Rick has finally had enough, the emotional gut punch came in the details. Throughout the episode, Maggie donned a baseball cap that made many fans believed was a callback to Glenn; he wore it through many of the earlier seasons of The Walking Dead, including when he and Maggie first met in season 2.

Is it the same one? It’s hard to tell, although chances are it could be. But right now it doesn’t matter. Maggie is channeling Glenn and some fans have a lot of feelings about it. And as one fan points out, he’s not the only character whose clothing she appears to be wearing.

Maggie's wearing a hat and it reminds me of Glenn.. how could they hurt my feelings like that

*flashbacks to season 1 Glenn wearing a hat very similar to the one Maggie is currently wearing* #TheWalkingDead pic.twitter.com/gCDSGGbfz8

Fans: Oh my god Maggie is wearing Glenn's hat!
Me: Where the hell did she get that?#TheWalkingDead

We hope she keeps wearing it next season. It suits her.