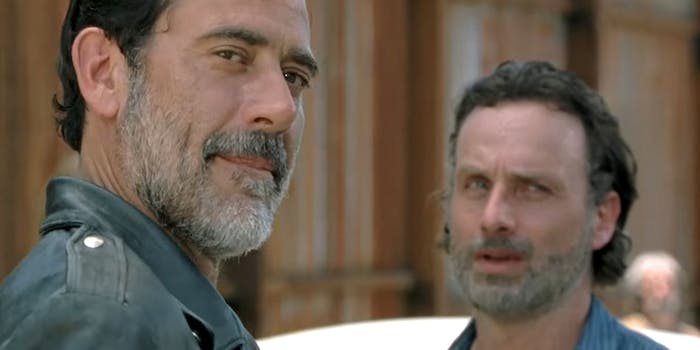 'If there's a limit to what's acceptable on TV at all, this episode clearly crossed it.'

Pretty much everyone knows The Walking Dead is one of the most violent shows on TV, but that didn’t stop fans or casual viewers from making official complaints about the brutality of the season 7 premiere.

According to Federal Communications Commission (FCC) documents the obtained by the Daily Dot through a Freedom of Information Act request, more than a dozen people sent official complaints to the agency about the show in the days following the premiere.

Although the FCC can’t regulate basic cable shows like it does with broadcast channels like ABC, CBS, and NBC, networks typically limit what they air. Shows usually don’t contain graphic nudity, and characters rarely (if ever) say “fuck.” Because of this, The Walking Dead films two versions of scenes involving the show’s newest villain, Negan: one suitable for TV, and an uncensored version for the Blu-ray, which lets Negan curse as much as his comic book counterpart does. In his 10-minute debut last season, he dropped at least 23 F-bombs, according to ScreenCrush.

The Walking Dead has never shied away from its violent nature, however. Throughout the first six seasons, we’ve seen gory murders, amputations, gunshot wounds, stab wounds, violence toward children, and countless takedowns of Walkers in various states of decay. For some fans, however, the season premiere was a step too far, and they fired off official complaints to the FCC because of it.

Some of the complaints that the FCC released to the Daily Dot regarded technical issues, such as commercial volume, gripes with a cable company, or complaints about the language, including uncensored F-bombs from Lauren Cohan and Chris Hardwick on The Talking Dead and one particularly graphic line from Negan. But the majority of complaints that arrived immediately after and in the days following the season 7 premiere, “The Day Will Come When You Won’t Be” directly referenced the violence in the episode.

“Where is Standards & Practices and why did AMC’s sponsors allow what amounts to a snuff film to be broadcast?” one viewer from Portland, Oregon, wrote.

Others alluded to the hypocrisy of censoring swear words and nudity on television while The Walking Dead aired brutal death scenes. Some worried that young children who watched the show would become traumatized from the season premiere. One complaint from Stratford, Connecticut, said their 12-year-old daughter cried hysterically even after turning away from the television screen. 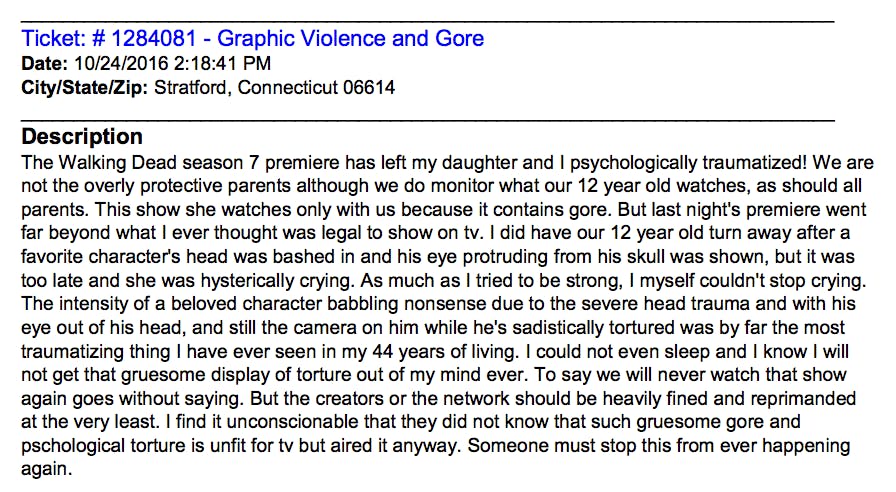 “If there’s a limit to what’s acceptable on TV at all, this episode clearly crossed it,” a viewer from Chantilly, Virginia, complained.

One person extensively quoted a USA Today article titled “Has ‘The Walking Dead’ finally gone too far for fans?” to demonstrate that other fans felt the show had crossed a line. Many of them vowed to stop watching—and it appears they have. While the season premiere was the second-highest watched episode ever, ratings have gone down since, at one point hitting a four-year low.

The Walking Dead executive producer Greg Nicotero has defended the violence in the episode and called fans’ plans to boycott the show after the premiere a “knee-jerk reaction.”

“I would say that [their threat] means we have done something to affect these people in a way that they don’t necessarily know how to process,” he told reporters back in October.

You can view all of the FCC complaints below.