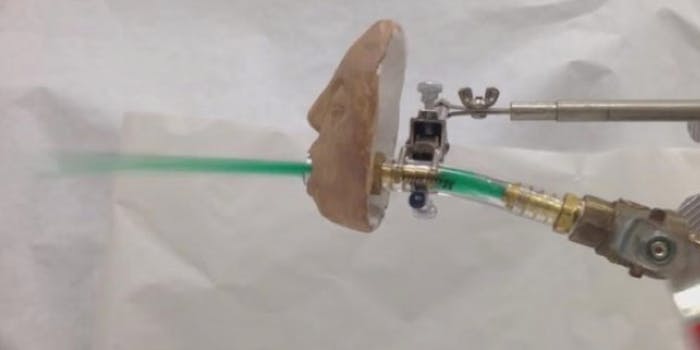 It may be gross, but it has a purpose.

Researchers are using a vomiting robot to study the spread of human noroviruses, the usual culprits behind your awful stomach bug. Here’s a stomach-turning video of the robot in action. (Warning: You are about to see vomit.)

That is some intense projectile vomiting. And why did they have to put that creepy face on it?

The researchers published their findings in the online open-access journal PLoS One. They wrote that noroviruses are usually transmitted through the fecal-oral route, which is why unhygienic food establishments are often the source of outbreaks. However, the biggest sources of outbreaks are hospitals and health clinics, where you may be more likely to come in contact with someone’s projectile vomit (or their feces, because hospitals are gross.)

Researchers think that when an infected person vomits, some of the virus particles are aerosolized (meaning they become parts of little droplets in the air) and can be swallowed by someone nearby, infecting them as well. Worse yet, noroviruses are hardy and can live on surfaces for days, lying in wait for someone who might touch a doorknob or a telephone and then touch their eyes, nose, or mouth.

Unfortunately for us, the researchers showed that noroviruses can probably accomplish this chemical trick through vomit. But in addition to having to use simulated vomit, they also had to use a viral stand-in as well. Noroviruses don’t grow in petri dishes, so studies of the viruses have to use other viruses that are similar in structure but more readily grown in the lab.

The amount of virus floating in the air depended greatly on a number of factors, including the vomit’s viscosity (or thickness) and how much virus was in the vomit to begin with.

The researchers said that their robot was also imperfect at mimicking a real-life vomiting event. As anyone who’s had the misfortune of experiencing projectile vomit can tell you, that robot seems to pack a bit more of a punch than the real thing.

Additionally, the robot only sprayed liquid vomit, instead of spewing solid chunks like most people would. These factors may have affected the measurements of just how much virus was aerosolized, the researchers said.

Just to be safe, though, avoid people’s projectile vomit whenever possible. Consistently washing your hands and staying home from work and school when you’re sick can also help mitigate the spread of any virus.