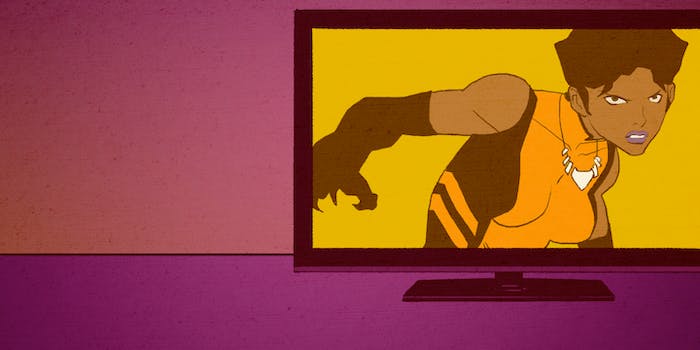 “How about I kick your ass like a woman?!”

Finally! X-men’s Storm won’t be the only awesome, popular black superheroine to get the live-action treatment.

The long wait for the live-action version of DC Comics’ Vixen is almost over. After much anticipation and teasing on social media, Megalyn Echikunwoke will guest star as the fierce heroine on tonight’s episode of the CW’s hit series Arrow at 8pm ET. (If you miss it you can catch up later on Hulu or on the CW’s website.)

#Vixen is coming. Please welcome @Megalyn to the show. pic.twitter.com/2cQYvEh4XX

Though she’s not as well known as Storm, Vixen’s popularity is on the rise following her self-titled animated web series that premiered last summer in the Arrow-Flash universe. Yet for many Arrow fans—and fans of the broader DC comics universe—Vixen is still something of a mystery. So here’s what you need to know about why Vixen’s live-action appearance holds  cultural significance:

Vixen was created by Gerry Conway and Bob Oksner, and premiered in Action Comics #521 in July 1981. However, the heroine’s development dates back long before her debut. In 1978, she was slated to be the first African superheroine to have her own DC comic series, but the first issue was canceled and left unpublished during what fans dubbed “DC Implosion.” The company had been marketing a “DC Explosion” meant to increase its line of comics, but it instead a period of poor sales and economic recession resulted in canceled titles and staff layoffs.

Although Vixen didn’t star in her own comic series until 2008, she was a member of the Justice League of America and Suicide Squad—storylines that explained her origin story throughout the years.

Vixen, AKA Mari Jiwe McCabe, is one of the few DC Comics superheroes who hold special powers of animal mimicry. She gets her gifts from the Tantu totem created by a god of African folklore Anansi the Spider. The artifact has been in her family—from the fictional African nation of Zambesi—for generations.

Her origin story was revealed in 1984/1985 as part of Justice League of America #234 and #239. As a child, Vixen’s mother was killed by poachers, and she was raised by her father Reverend Richard Jiwe who was later killed by his half-brother General Mustapha Maksai in pursuit of the totem.

She protected the totem and relocated to the U.S. Maksai caught up with Vixen, then a member of the JLA, and forced her to give him the totem. She knew the power could only be used for good, and it turned Maksai into a half-man, half-beast. He later died in battle facing the heroine.

In 1989’s Animal Man #12, it was explained that Anansi was an alien that created the totem part of a larger plan for superheroes with animal-like superpowers. Weird, right?

Even with her comic book history, superhero fans might best recognize Vixen from the animated series Justice League Unlimited. Let’s be honest, she kicked so much ass among peers like Hawkgirl, Black Canary, and Wonder Woman. She would make another animated appearance on Batman: The Brave and the Bold in 2010.

Since her days on DC’s team lineups, there have been two significant and long-awaited times Vixen got the chance to shine in her own series. The first was a five-part limited series, Vixen: Return of the Lion, in the late 2000s. In the comic series, Vixen returned to her native home of Zambesi to avenge the death of her mother. She discovers that she no longer needs her totem to access her power and can mimic any animal she chooses based on her own will.

Now fans can see a similar origin story and the heroine in action on her own web series, Vixen. Only this time around her sister Kuasa (Anika Noni Rose) is the villain after her totem. The series not only exists in the same universe as CW’s popular DC shows, it features guest appearances from The Flash (Grant Gustin), Arrow (Stephen Amell) and Cisco Ramon/Vibe (Carlos Valdes). The web series has been picked up for a second season set to premiere in 2016.

Now that Vixen is finally gaining deserved popularity, she’s making her live-action debut. Geek critics and fans are buzzing, as this likely won’t be Vixen’s only appearance.

CW President Mark Pedowitz told Entertainment Weekly that Vixen could potentially get her own live-action spinoff or become a regular on Legends of Tomorrow, a show featuring a team of superheroes and villains working together to prevent Vandal Savage from destroying the Earth and time itself. “Hopefully that character is going to spin itself out, if not, it can join Legends,” Pedowitz told EW.

In the episode “Taken,” Vixen helps the Green Arrow track down and fight villain Damien Darhk, who kidnaps the title hero’s son, according to International Business Times. (Warning: link might contain spoilers).

As revealed in the episode’s promo, let’s just say Vixen is likely to kick serious behind. “Face us like a man?” a goon says. Vixen isn’t about that. Instead she replies, “How about I kick your ass like a woman?!”

If anything is for sure Vixen, in live-action holds a deep significance if the Arrow introduction can lead to her becoming the first black superheroine to have own TV series.