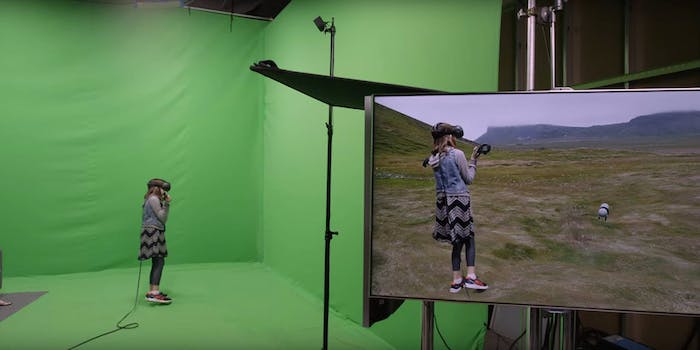 Get in the game.

You finally have a magic portal through which you can step into your own fantasy adventures, and it’s called SteamVR.

Valve Software has released a new mixed-reality video of people being shown the HTC Vive room-scale virtual reality system for the first time. The players were shot against a green screen, which allowed Valve to project the player’s entire body into VR. In doing so, it gives you a compelling look at what it’s really like to game in VR.

The Vive is a room-scale VR system, meaning you’re meant to use the Vive while standing up and moving around. It uses a pair of hand controllers instead of a control pad, so your interactions are less artificial than in a traditional video game. HTC, a smartphone manufacturing company based in Taiwan, produces the Vive hardware, while Valve Software develops the SteamVR software that powers it.

Using the Vive is a fundamentally different experience from playing traditional games. You can’t tell someone what room-scale VR is like, but now at least, you can show them. Mixed-reality videos like Valve’s provide accurate depictions of what it’s like to game in VR. (Trust me on this one.)

I found another, similarly awesome mixed-reality trailer for Fantastic Contraption, the engineering puzzle game that is currently shipping with the Vive. Of all the Vive games I’ve played thus far, Fantastic Contraption is one of the most accessible and family-friendly.

Preorders for the Vive began shipping on Tuesday. You can check out the Vive on either the HTC website or Valve’s Steam store.